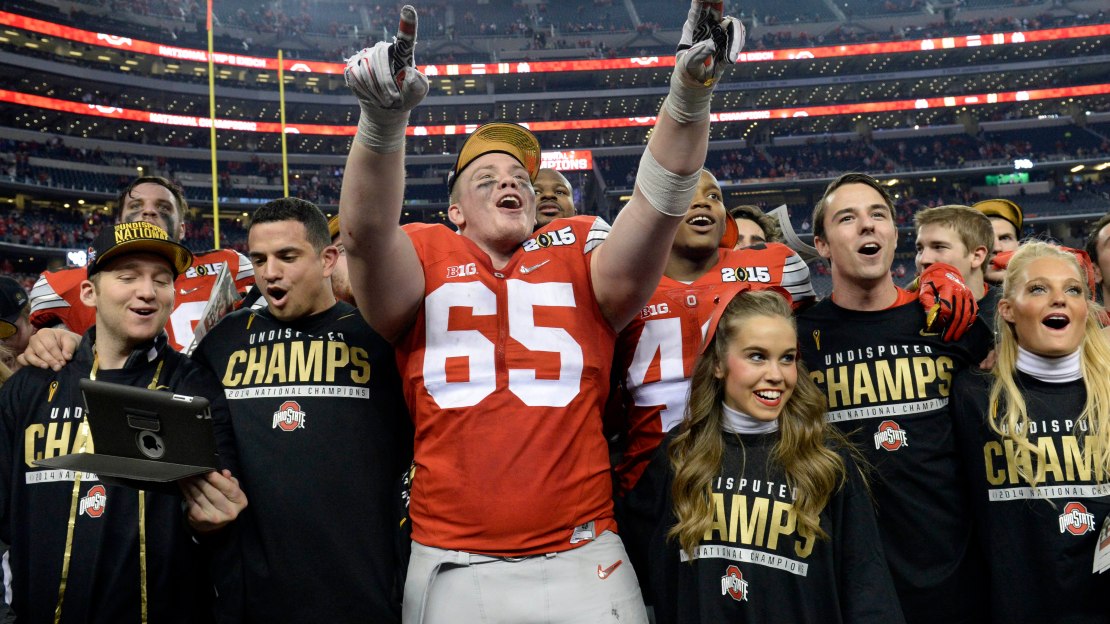 Interesting debate in the aftermath of the national title game. Should Ohio State have scored that last touchdown-or should it have taken a knee?

The Buckeyes had first-and-goal at the 2-yard line with a minute left and leading 35-20. Instead of taking a knee, Urban Meyer opted to punch in a final TD.

"You know, I didn't even think about taking a knee,? Meyer said. ?I can't tell you the situation. … I'm trying to visualize what happened. But, we play to win, we play to be aggressive in what we do. … I certainly didn't think about it at that time."

Hear Meyer talk more about the final touchdown at the 13-minute mark in the video above.

Meyer will have many of the same players back in 2015. Barfknecht notes that of Ohio State?s top 51 position players and specialists, 41 will return. Meyer?s biggest problem likely will be how to employ three quarterbacks - Braxton Miller, J.T. Barrett and Jones - who each could be an All-American if installed as the starter.

Ohio State winning the national title is good for the Big Ten, but Rutgers won?t reap an additional monetary benefit of a share of the $6 million the league gets for OSU reaching the title game.

NJ.com says the additional $6 million will be split among the 11 fully financially integrated programs, while the three schools still in their integration periods (Rutgers, Maryland and Nebraska) won't share in the incremental revenue from the College Football Playoffs, according to Janine Purcaro, Rutgers' Chief Financial Officer for athletics.

New Michigan coach Jim Harbaugh will have at least one holdover from Brady Hoke?s staff, retaining Greg Mattison. He was Hoke?s defensive coordinator but will serve as d-line coach for Harbaugh. Mattison?s ties to the Harbaugh family run deep.

And it looks like former Penn State safety Mike Zordich will be joining the Michigan staff, too.

The great Mike Griffith of Mlive.com has five reasons why Michigan State could play in next season?s title game.

Optimism begins with arguably the best returning defensive line in nation that got a big boost when Shilique Calhoun opted to return for his senior season. Lawrence Thomas and Malik McDowell also bolster this unit.

Another Big Ten game, another loss for Minnesota. That?s 0-5 for the Golden Gophers. Is pressure mounting on Richard Pitino? Jim Souhan of the Minneapolis Star Tribune says it?s time for the second-year coach to show that he is more than a name.

Before the season started, most figured the Gophers would be highly competitive because of a lackluster Big Ten and the presence of talented senior guards coming back from an NIT championship team. But now, the Gophers? season is threatening to go off the rails.

Tough blow for Indiana, which has lost Hanner Mosquera-Perea for 2-4 weeks with a right knee injury.

The Hoosiers? frontcourt was thin with him. Now, it?s even thinner. Time for freshman forward Emmitt Holt-among others–to step up.

Penn State also is dealing with a loss, as key player John Johnson has been suspended for conduct detrimental to the team. And it?s not known when-or if-he?ll return. Bad news for a Nittany Lions club that was 12-1 in non-conference action but is now 0-4 in the Big Ten.

Johnson is averaging 7.4 points and just over 20 minutes per game

Iowa?s last-second win at Minnesota last night was heart-stopping. And it may have given the team a new lease on life.

Heading into Tuesday's game against Minnesota at Williams Arena, a Hawkeye team hadn't pulled a game out in the final seconds since 2008, when Cyrus Tate beat Kansas State in the Las Vegas Invitational. That streak ended with 3.5 seconds to play Tuesday, when Jarrod Uthoff's 17-footer gave Iowa a 77-75 victory. Just big-time for a team that is now 3-0 in true road games this season.