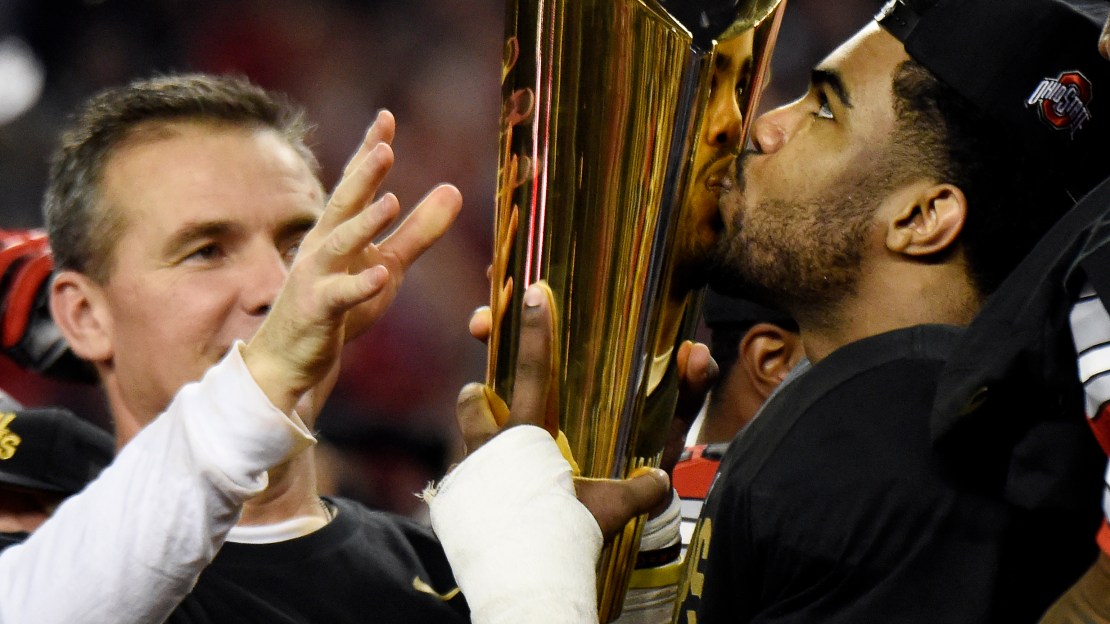 The postseason is complete following Ohio State beating Oregon, 42-20, to claim the inaugural national championship of the playoff era.

Ohio State's run was one for the ages. The Buckeyes, as everyone knows, took down then-No. 1 Alabama in the semifinals and dropped then-No. 2 Oregon in the title game with third-string quarterback Cardale Jones making just his second and third career starts.

But, a lot like Michigan State last year on its way to the Big Ten and Rose Bowl Game titles, Ohio State improved every week down the stretch.

The Buckeyes highlighted the Big Ten's incredible and statement-making 6-5 postseason, which included victories over the SEC champ (Alabama), Pac 12 champ (Oregon) and Big 12 champ (Baylor), not to mention a victory over Auburn, of the SEC West.

QB Christian Hackenberg, Penn State. He completed 34-of-50 passes (68 percent) for 371 yards vs. Boston College and was selected as the New Era Pinstripe Bowl MVP. Have to tip our hat to Ohio State's Cardale Jones, who hit 59 percent of his passes vs. Alabama and Oregon for 485 yards with two touchdowns and two interceptions in just his second and third career starts.

Yankee Stadium is rockin' as Penn St ties it 21-21 after Hackenberg throws 16yd TD. Only 6 min to go http://t.co/s0ll7uubuw #PinstripeBowl

RB Ezekiel Elliott, Ohio State. A star has been born, as Elliott had a Sugar Bowl record 230-yard performance vs. Alabama and followed with a championship game record 246-yard effort vs. Oregon. Add it up, and that's 476 yards on 56 carries with six TDs, averaging 8.5 ypc.

Ezekiel Elliott… is GONE! 33-yd TD run for the Buckeye RB and it's now 7-7 at AT&T Stadium http://t.co/BK5jXFwYbZ #UOvsOSU

WR/CB Tony Lippett, Michigan State. Mr. Do-It-All, Lippett had a team-high five catches for 74 yards. His 17-yard grab along the sideline from Connor Cook on a fourth-and-10 play kept the game-winning drive alive in the final minute. Lippett also contributed two tackles and a pass break-up at cornerback.

TE Maxx Williams, Minnesota. He had seven catches for 98 yards and one memorable TD in which he hurdled a couple defenders on the way to pay dirt.

Maxx Williams! #SCTop10 In the play of the day thus far, Williams hurdles 2 defenders on this 54-yd TD http://t.co/EjdpMV4ARZ #CitrusBowl

OL Jack Allen, Michigan State: The Spartans rolled up 29 first downs and 552 total yards (238 rushing yards, 314 passing yards) in rallying from 20 points down in the fourth quarter to defeat Baylor, 42-41, in the Cotton Bowl.

OL Taylor Decker, Ohio State. He helped pave the way for a 537-yard effort vs. Alabama, as the Buckeyes had 256 yards passing and 281 yards rushing. Decker followed that with a monster national title game, as OSU had 538 yards of offense with 296 rushing.

OL Brandon Scherff, Iowa. Part of a front that helped the Hawkeyes rush for 244 yards in a loss to Tennessee.

OL Betim Bujari, Rutgers. He called the signals on a line that allowed zero sacks, rushed for 340 yards (most in a game for RU since 2007) and helped RU total a season-high 524 offensive yards.

OL Kyle Costigan, Wisconsin. Helped the Badgers rush for 400 yards despite loss of starting C Dan Voltz. He played through a calf injury that forced him to hop on one leg from the huddle to the line of scrimmage, in addition to season-long injuries he was already battling.

DL Anthony Zettel, Penn State. He posted a game-high two tackles-for-loss (for minus-7 yards) and recorded six tackles in helping Penn State rally past Boston College in the Pinstripe Bowl. His 17.0 TFLs for the season rank No. 2 in Big Ten.

DL Andre Monroe, Maryland. With a sack midway through the first quarter, he became Maryland?s all-time sack leader. Monroe has 25 career sacks with 10.5 coming this season.

DL Steve Miller, Ohio State. He recorded his first career interception in the third quarter of the Sugar Bowl and returned it 41 yards for a TD.

LB Darron Lee, Ohio State. He was named defensive MVP of the Sugar Bowl with seven tackles, including two sacks and a tackle for loss. Lee followed with a strong effort vs. Oregon, helping limit the Ducks to 132 yards rushing.

LB Josey Jewell, Iowa. He led the Hawkeyes with a career-best 14 tackles and was named Iowa?s Most Valuable Player in the loss to Tennessee.

LB Curtis Grant, Ohio State. He paced the Buckeye defense with 10 tackles vs. Alabama and helped mute the high-flying Oregon offense that went 2-of-12 on third downs.

LB Joe Schobert, Wisconsin. He finished with six tackles and a game-high 3.0 TFLs. He also made the stop on all three Auburn plays in overtime.

DB Briean Boddy-Calhoun, Minnesota. He had four tackles with an interception and pass broken up. He also had another pick on a two-point conversion.

Check out this video #espn http://t.co/62zErxtvEq @chriscallahan had a beed on him and got leveled WOW

DB Vonn Bell, Ohio State. He had eight solo stops to go with an interception to help stymie the Bama offense in the Sugar Bowl. Shout-out to fellow Buckeye safety Tyvis Powell, the defensive MVP of the title game with a team-high nine stops.

K Rafael Gaglianone, Wisconsin. He forced overtime with a 29-yd field goal with seven seconds left and then hit a game-winning 25-yard field goal in overtime. He finished the season with 14 consecutive made field goals.

P Cameron Johnston, Ohio State. He made six boots, averaging 46.5 yards with two punts inside the 20-yard line and a long of 60 yards. Johnson averaged 42 yards on three punts in the title game.

KR William Likely, Maryland. He ran back a kickoff 100 yards for a TD vs. Stanford.