Dienhart: For Ohio State, 2015 is a time to dream really big 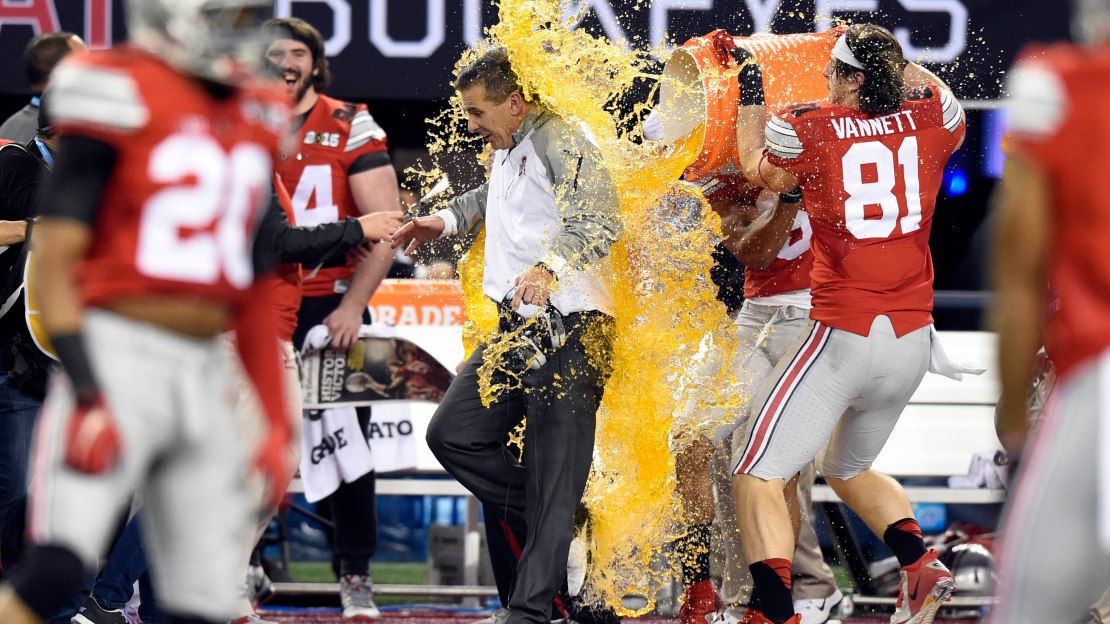 DALLAS — This could be the start of something big at Ohio State. The team that walked off the field showered with confetti after Monday night?s national championship game win over Oregon returns many key pieces. It's time to start dreaming big.

Ohio State is on the precipice of becoming the "it" program, a college football bellwether and 10,000-pound beast. Urban Meyer's program is 38-3 in three years and has yet to lose a Big Ten regular-season game en route to posting a 24-0 mark. This win last night may be first of a run of national championships for the Buckeyes.

Among the key players who will be back on offense in 2015 are running back Ezekiel Elliott, linemen Taylor Decker, Jacoby Boren, Pat Elflein and Billy Price, tight end Nick Vannett and receivers Jalin Marshall, Corey Smith and Michael Thomas-along with quarterbacks Braxton Miller, J.T. Barrett and Cardale Jones.

The big question for the Buckeyes in 2015 will be quarterback. How will the position sort itself out with three key players returning? Miller is a two-time Silver Football winner as the Big Ten MVP but is coming off a season-ending shoulder injury that cost him all of 2014. Barrett was the first-team All-Big Ten quarterback last year as a redshirt freshman after assuming command from Miller. Jones is the wunderkind with who took over the final three games-three HUGE games-and delivered wins in the Big Ten title tilt vs. Wisconsin, the Sugar Bowl against Alabama and the national championship vs. Oregon. It was a stupefying run of success for a third-string signal-caller and the stuff of which movies are made.

"It means a lot to me because I'm happy, I was able to show what I'm capable of," Jones said. "It sucks that I had to come in the way that I did with two quarterbacks getting hurt with season-ending injuries. But I'm happy that with the preparation I was able to display my skills."

"It's definitely a 'who knows' right now," Jones said in the aftermath of last night?s game. "It's up in the air sort of. I know my number one priority is to graduate from the Ohio State University and walking away with something that no one can take away from you.

"Football, you know, definitely has a timetable on it in my career, but my degree is one of the most important things to me."

On Tuesday morning at the winning team's press conference, Jones answered an NFL question from a reporter with this answer: "In my personal opinion, I'm not ready for that level yet."

"In my personal opinion, I'm not ready for that level yet." – Cardale Jones on making a move to the NFL. http://t.co/dVWm38iyIk

But know this: Jones' stock never will be higher, as he faces the possibility of being relegated to third string again next season.

If all three quarterbacks come back, it will be fun to watch how it all sorts out, especially with the added dynamic of a new offensive coordinator in Tim Beck-who reportedly is taking over for the departing Tom Herman who is off to coach Houston.

Could the quarterback situation be divisive for the offense? How will the new coordinator blend in? Will the Buckeyes stay hungry and focused? Lots of good storylines in Columbus already are developing. And it?s still January.