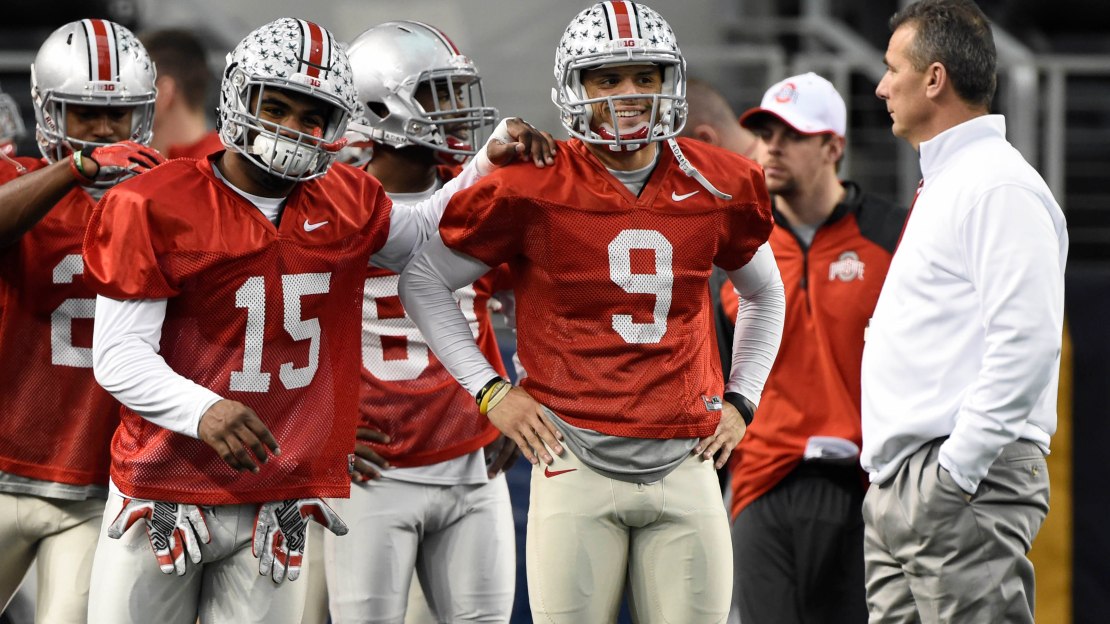 DALLAS — It?s game day! All of the hype, analysis and spin are over. It?s time for Ohio State and Oregon to play for the national championship.

The Buckeyes are playing for the title for the fourth time since the 2002, which is the last time OSU and the Big Ten won it all. The Buckeyes lost the championship game in 2006 and 2007.

Here are seven things Ohio State must do tonight to beat the Ducks.

1. Run the football. It?s simple. And it?s necessary. The Buckeyes have been ripping it up on the ground the last two games, running for 301 yards vs. Wisconsin in the Big Ten title game and shredding Alabama for 281 rushing yards in the Sugar Bowl. Ezekiel Elliott has been unstoppable the last two contests with 220 and 230 yards rushing. A good ground game would not just wear down the Oregon defense-it also would keep the prolific Duck attack on the sideline for extended stretches.

2. Contain Marcus Mariota. The Heisman winner is a deadly dual-threat. Ohio State can?t let him break containment and free-lance in the open field as a runner. Will the Buckeyes put a spy on Mariota? Whatever the strategy, Mariota must be contained and limited in his big plays. The Buckeyes? athletic ability at linebacker will help.

3. Win first down. Yes, Cardale Jones has been stunningly successful in making his first two career starts in the white-hot spotlight of the Big Ten title game and Sugar Bowl. But to keep things manageable for him, the Buckeyes need to win first downs by gaining four or five yards consistently. It?s all about avoiding undesirable down-and-distance situations that will force Jones to pass when everyone in the building will know he?s gonna pass. That?s when bad things happen.

4. Go deep. Does anyone in America throw a better long ball than Cardale Jones? It?s a thing of beauty to behold. The 6-5, 250-pound sophomore has a powerful right arm and also is blessed with deft accuracy and touch as he has hit 30-of-52 passes for 500 yards with four touchdowns and an interception the last two games. And even if he?s off target, the Buckeye wideouts have proven to be more than capable of adjusting, leaping and making the grab. In fact, this Ohio State receiving corps has really stepped up and shown how special it is the last two games.

6. Red-zone TDs. When the Buckeyes get into the red zone, they will need to score touchdowns-not kick field goals. It is highly unlikely that Ohio State will beat this Oregon squad kicking field goals. That?s where a strong Buckeyes rushing attack can come in handy-along with big tight ends Jeff Heuerman and Nick Vannett-inside the 20-yard line.

7. Score unconventionally. With this game likely being played in the 30- or 40-point range, it may be asking too much of Ohio State for its offense to score all of the team?s points. It certainly would be a big-time help if the Buckeyes can generate a touchdown from their special teams or defense. OSU had a pick-six vs. Alabama.