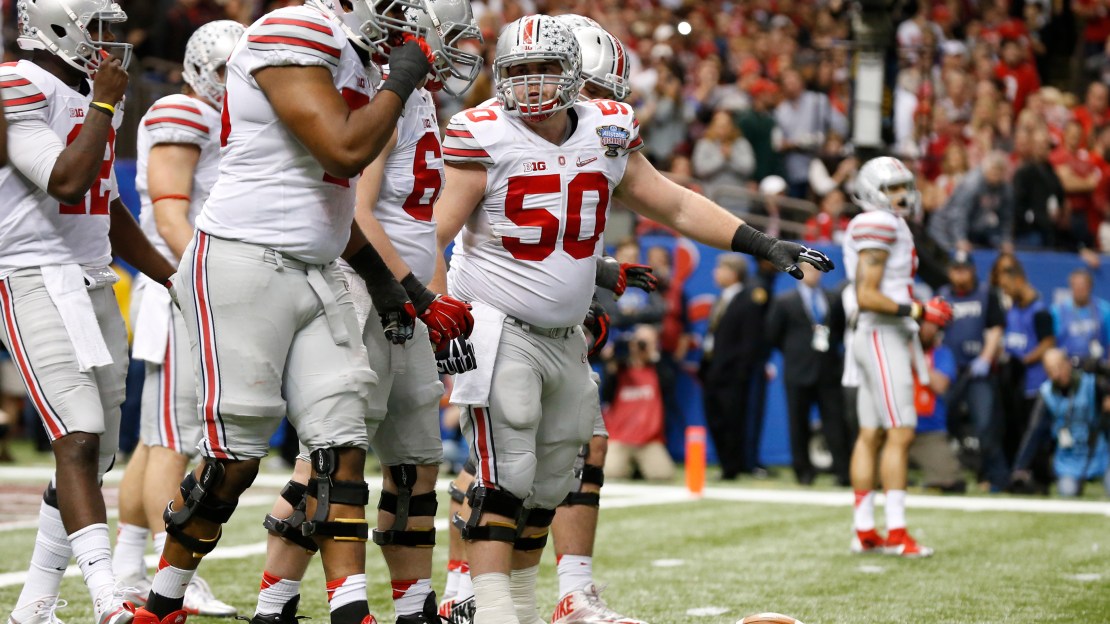 DALLAS — Ask most any Ohio State player or coach about what unit has progressed the most this season, and they?ll likely point to the offensive line.

The unit had to replace four starters from 2013. And there was some rough sledding early in the season. Witness the 35-21 home loss to Virginia Tech in the second game of the season.

But now, the front has come together to be a bona fide strength. Left tackle Taylor Decker has been the anchor all season as the lone returning starter. Pat Elflein has emerged as a star at right guard, with Billy Price at left guard, Darryl Baldwin at right tackle and Jacoby Boren at center for an offense that is No. 1 in the Big Ten in scoring (45.0 ppg) and yards (509.7 ypg).

I sat down with Boren, the 6-1, 285-pound junior, and asked him to break down his o-line buddies-in a fun sort of way.

Tom Dienhart: Who is the toughest guy on the line?
Jacoby Boren: We all are pretty tough. But if I had to choose one, I?d probably give it to Pat (Elflein).

TD: Who do you want in a back-alley brawl?
JB: Probably Pat. He?s a blue-collar guy. I?d take him in a street fight. He might fight a little dirty. He?s a truck driver. I?m a snow-plow driver. We both listen to Bob Seger in the weight room. That?s how we do things.

TD: Who?s the strongest lineman?
JB: Darryl (Baldwin) has a pretty good bench. But overall, it?s Billy (Price). Their benches are pretty similar, but Billy overall is the strongest.

TD: Who is the fastest lineman?
JB: That one is Darryl for sure. Show him your ?speed? calves, Darryl. (Baldwin lifts a pant leg to reveal a bulging calf. It is impressive.) Looks a little ashy. But he runs about a 4.7.

TD: If the staff wanted to put the ball in the hands of one lineman to run a play, who would it be?
JB: If anyone could scheme up a play, it would be Billy at quarterback. He?s like a skill guy at heart but has a lineman?s body. If he could, he?d wish to be a skill player.

TD: Who is the nerd of the group?
JB: Billy, for sure. He has Calculus classes. I?d say he?s the biggest nerd of the bunch.

TD: Who eats the most?
JB: I don?t think you can give that to anyone specifically. That will be pretty even across the board. We all eat a lot. We go out once or twice a week as a group. Get a nice steak, Chipotle or Five Guys.

TD: What is your favorite place to dine?
JB: Chipotle or Five Guys is our most common spot.