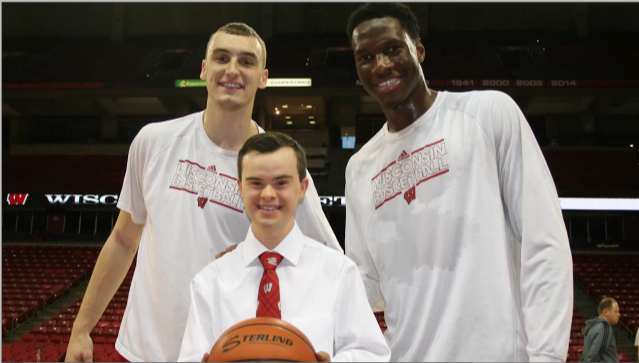 His name is Jeffrey Carter, and he is a die-hard Wisconsin men?s basketball fan. Sporting his red and white Wisconsin tie and a smile across his face that is worth a million words, Jeffrey is ready to take on the start of a new day.

Although Jeffrey has Down Syndrome, nothing is going to stop him on this special day. This day is about basketball - Wisconsin basketball.

Jeffrey?s parents, Jackie and Jim Carter, were looking to purchase tickets for their son to attend a Badger basketball game. However, due to his fear of heights, the family reached out to see if there were any options where Jeffrey could sit down low, close to the court.

What happened next is something that would change Jeffrey?s life forever.

Jeffrey got the chance to meet the players and coaches of the Badgers? men?s basketball team. In fact, he got the opportunity to be a manager for a day, where he hung out with the team, helped them with drills in practice, and even made his own personal handshake with star Sam Dekker.

?Jeffrey?s got a good memory of things that mean a lot of him,? his mother said. ?But I think this one will go down in history for him.?

As the day went on, Jeffrey received multiple autographs from players and had the chance to converse with members of the Badgers team. He got the opportunity to sit courtside for the game, which was a dream come true for both Jeffrey and his parents.

?He?s done some amazing things, but I would venture to say that this is probably the happiest day of his life,? Jackie Carter said. ?He has talked so much about wanting to be a Badger, about living in Badger country, and I know just by watching him and how wonderful these guys are with him, that he will never forget this experience."

Watch the entire video above to see Jeffrey?s dream day with the Badgers? men?s basketball team.