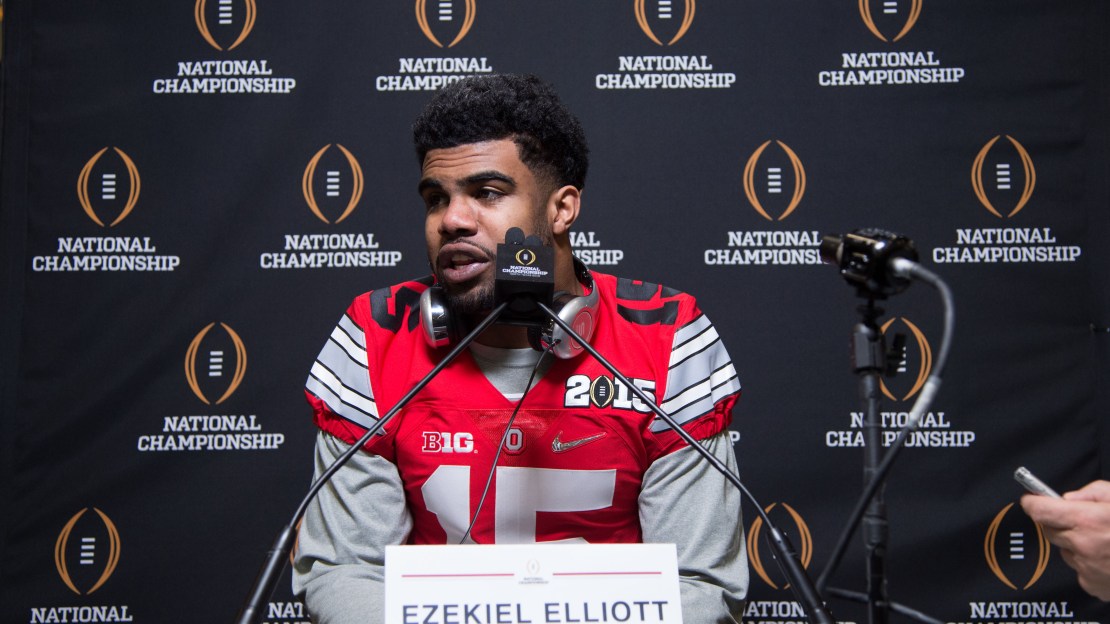 DALLAS — Anytime Gus Frerotte, the football coach at John Burroughs High School in suburban St. Louis, wanted to show a player how to play a position, he had Ezekiel Elliott do it.

?I?d say, ?Ezekiel, go show that offensive tackle how to pass block,?? said Frerotte, a former NFL quarterback who has since left Burroughs. ?And he?d do it. The kid could have played any position. He had a passion and knowledge of the game that was unique.?

But Elliott is a running back. And a dang fine one at that who just may be the hottest player entering Monday night?s national championship game between Ohio State and Oregon.

How hot has the Buckeyes sophomore been? In Ohio State?s surprising win over Alabama in the Sugar Bowl, he gashed the vaunted Crimson Tide defense for 230 yards rushing on 20 totes.

This was one of the SEC?s top defenses?

Before that Offensive MVP effort in the Sugar Bowl, Elliott ran for a Big Ten title game record 220 yards vs. Wisconsin, making him the first back in Ohio State's glorious annals ever to have back-to-back 200-yard rushing games.

Now, Elliott has his aim on Oregon, which allows 156.1 yards rushing.

?I really thought that he would be a special player on the college level,? said Jim Powers, a high school analyst for FOX 2 in St. Louis. ?He had all the tools at John Burroughs. He has great acceleration. But I think a big reason why he is successful is his vision. In high school, he saw the hole open and was able to get through it. Another big plus was playing for former NFL quarterback Gus Frerotte. The offense that Zeke played in at Burroughs really helped prepare him for playing in the Big Ten.?

Elliott?s 2014 season has been a slow tease of sorts. It began with some modest efforts-44 yards vs. Navy; 32 vs. Virginia Tech; 65 vs. Kent State. Then, things began to pick up.

Elliott was rolling-and he wouldn?t slow down. Add it all up, and Elliott has run for 1,491 yards in the last 11 games, averaging 135.6 yards per contents. For the season, he has 1,632 yards rushing and 14 touchdowns, averaging 6.9 yards per carry.

"He (reads blocking patterns) instinctively and then explodes into open seams," Ed Warinner, Ohio State's offensive line coach and co-offensive coordinator said. "He loves football and plays every snap like it's his last."

Only three Ohio State running backs have ever rushed for more yards in a season: Eddie George had 1,927 while winning the Heisman Trophy in 1995, Keith Byars had 1,764 in '84 and two-time Heisman winner Archie Griffin had 1,695 in '74. That, ladies and gentlemen, is select company.

"I've become a better runner as the year's gone on," Elliott said.

Elliott will likely need another big game on Monday night in AT&T Stadium if Ohio State wants to beat Oregon and win the program?s first national championship since 2002.

[ MORE: Get all of our national title game coverage ]

OSU will face a prolific Ducks? offense that likes to operate at a break-neck pace behind Heisman Trophy-winning quarterback Marcus Mariota. This offense sprays points on the scoreboard with frightening efficiency and quickness–averaging 552.9 yards and 47.2 points.

The Buckeyes? best counter to that? To keep the ball away from Mariota and Co. And the best way to accomplish that is to run the football. That?s where Elliott comes into play for an offense that averages 45 points and 509.7 yards-both tops in the Big Ten-and ranks third in rushing (262.2 ypg).

"Ezekiel Elliott plays as hard as any back I've ever witnessed without the ball," Meyer said.

Elliott has ably followed in the footsteps of Carlos Hyde, who became the first running back ever to rush for over 1,000 yards under Meyer last season (1,521).

"Coach (Stan) Drayton put a lot of emphasis on gaining yards after contact this year and being a back like Carlos," Elliott said. "Carlos was a very powerful back and that's something that he didn't really see in our room, so that's something he really wanted to work on in the offseason."

Hyde was very good. Elliott may be even better.

The 6-0, 225-pound Elliott may be that guy. He was a highly-recruited prospect who felt pressure to stay in-state and play for Missouri, where his mother and father were athletes. But the pull to play at Ohio State was too much to resist.

Elliott already may be forging a place among the aforementioned all-time great Ohio State running backs. But it will take at least one more great season to get into that conversation. A run at the Heisman in 2015 could loom. Win that-or became a finalist-and Elliott will have a special place in Buckeye lore.

And he can take a big step toward a big 2015 with another monster game on Monday night with the nation watching.

"I just think it's the mentality you have to have," Elliott said. "You just have to go out there and have that mentality that you won't be brought down, that you're going to get those tough yards.

"I can't wait for Monday. We all are looking forward to the challenge."