Ohio State vs. Oregon: Which team has the advantage at every position? 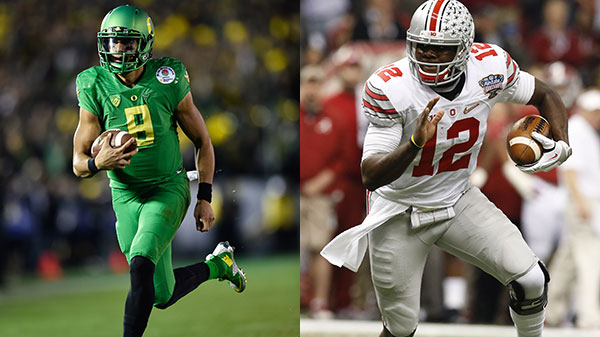 We've heard experts pick their winners, but we wanted to take it one step further.

BTN.com senior writer Tom Dienhart and web editor Sean Merriman got together and broke down which team has the advantage at every position out on the gridiron.

Ohio State: With Braxton Miller (shoulder) and J.T. Barrett (ankle) out, Cardale Jones has been nothing short of stunning the last two games. He has completed 30-of-52 passes (58 percent) for 500 yards with four touchdowns and one interception for an attack that averages 45 points and 509.7 yards. Not bad for a sophomore who was making his first career starts in two huge games. Jones has made plays and avoided myriad mistakes. Very impressive.

Oregon: What more can you say about Marcus Mariota? This year?s Heisman Trophy winner had one of the best statistical seasons in college football history. Contain Mariota, and the Buckeyes have a great chance to bring home the first-ever College Football Playoff National Championship trophy. But if the Buckeyes? defense lets Mariota get going, it could be a long night for this OSU defense.

Ohio State: A star has been born. And his name is Ezekiel Elliott. The sophomore is on a major roll, rushing for 450 yards and four touchdowns in the last two games, pushing his season total to 1,632 yards rushing. Elliott has the speed to go the distance; witness his clinching 85-yard TD jaunt vs. Alabama in the Sugar Bowl. And at 225 pounds, he can bang inside. Elliott also has 27 catches. No player in this national title game is hotter.

Oregon: Doesn?t it seem like Oregon is always loaded at the running back position? It?s the same story this season, as the Ducks feature the one-two punch of Royce Freeman and Thomas Tyner. Freeman, a 6-0, 227 pound do-it-all back, led the Ducks in rushing this season with 1,343 yards and 18 touchdowns. Tyner is more a speedy back who is a home run threat out of the backfield. He rushed for 511 yards and five touchdowns this season. Both Freeman and Tyner averaged more than 5.0 yards per carry. That?s darn impressive.

Ohio State: This unit was a question as 2014 dawned. But it has rounded into form nicely and has become a major strength with left tackle Taylor Decker and guard Pat Elflein the anchors. Tackle Darryl Baldwin also is a proverbial cut-above. Credit line coach Ed Warinner, one of the best in the business.

Oregon: How good is Oregon?s offensive line? Well, just take a look at last week?s Rose Bowl matchup. Oregon rushed for 301 yards in a commanding 59-20 win over Florida State, 206 of which came inside the tackles. That is the most such yards Florida State has allowed in the last two seasons. Even more impressive is the fact that the Ducks were not contacted until at least five yards past the line of scrimmage on 12 of their 35 rushes. This is a tough group that thrives in running an up-tempo, quick snap offense.

Ohio State: This may be the most underrated aspect of the team, as the unit has stepped up the last two games with some big plays. Devin Smith is the ultimate big-play-waiting-to-happen, averaging 27.7 yards per catch with 12 touchdowns. Michael Thomas is a steady force who leads the way with 50 receptions. Redshirt freshman Jalin Marshall is a dynamic weapon who can be used in a variety of ways. He has rushed for 142 yards and has 33 catches while also taking some turns as a Wildcat quarterback. And don?t sleep on Evan Spencer, who is sneaky good. Tight ends Nick Vannett and Jeff Heuerman move the chains.

Oregon: The Ducks don?t have a single receiver with more than 70 catches, but they have six players with 25-or-more catches. What does that mean? That Marcus Mariota loves to spread the ball around, and he?s darn good at it. Byron Marshall is not the biggest of targets (5-10, 205 pounds), but he leads Oregon with 66 catches for 834 yards and five touchdowns.

Ohio State: This is the strength of a much-improved Buckeyes? defense. Led by end Joey Bosa, the Big Ten Defensive Player of the Year has 20 TFLs and 13.5 sacks for a group with 43. This unit stops the run and rushes the passer with equal aplomb. Tackle Michael Bennett is the bellwether inside. Fellow tackle Adolphus Washington is tough vs. the run and can push the pocket. OSU yields 142.0 yards rushing per game.

Oregon: This has been a bend-but-not-break unit all season for the Ducks. Arik Armstead and DeForest Bucker are a pair of talented defensive ends. The Ducks racked up 36 sacks this season, as well as 89 tackles for loss. This is a group that will get after opposing quarterbacks.

Ohio State: This group hasn?t lived up to expectations in recent years. No more. Redshirt freshman Darron Lee has been a revelation. Curtis Grant is living up to his original five-star billing. Josh Perry is a stalwart who can make plays sideline to sideline. Depth runs deep with youngsters like Raekwon McMillan and Chris Worley.

Oregon: This Oregon linebacking unit has been trying to shake off the notion that it?s soft. This unit has been outstanding as of late, holding Arizona and Florida State - two of the top offenses in the nation - to some of their worst outputs of the season. The Ducks totaled six sacks and recovered five fumbles in those two games. Tony Washington and Torrodney Prevot were outstanding in both games.

Ohio State: This unit often struggled in 2013 but has emerged as a close-knit group that limits big plays. Credit the corner duo of Doran Grant and Eli Apple. Grant is the unquestioned star, a true shut-down force. There are few better safety duos than Vonn Bell and Tyvis Powell, who each packs a punch vs. the run while holding ground in coverage for a team that has 24 interceptions and is No. 2 in pass-efficiency defense.

Oregon: This is not a strength of this team, and it hurts even more that the Ducks will be without All-American CB Ifo Ekpre-Olomu, who suffered a season-ending knee injury leading up to the Rose Bowl game. The Ducks? defense allows 266 yards per game through the air. Senior Erick Dargan is the leader of the secondary. He has totaled seven picks this season, including one in last week?s matchup with Florida State. Ohio State?s receivers have been outstanding as of late, led by Devin Smith, who has totaled 224 yards and four touchdowns over the Buckeyes? last two games. However, Oregon doesn?t give up a ton of big plays. The Ducks are allowing 11 yards per completion, which is interesting given that Cardale Jones has shown he loves the deep pass. This will be an interesting chess game to watch.

Ohio State: Freshman kicker Sean Nuernberger has been steady but not spectacular, hitting 13-of-20 field-goal attempts with a long of 49 yards. Punter Cameron Johnson is unorthodox but effective, averaging 45.3 yards per boot. Jalin Marshall is a slippery punt return man who has gone the distance while averaging 12 yards per run back. Curtis Samuel goes for over 20 yards on kickoff returns. The coverage teams are excellent, allowing just 5.8 yards per punt return and 17.5 on kickoffs.

Oregon: When thinking about Oregon, special teams certainly isn?t the first thing that comes to find. In fact, Oregon kickers have only attempted 19 field goals in 14 games this season. Matt Wogan has made seven of nine attempts, while Aidan Schneider has made nine of 10 attempts. Ian Wheeler is the Ducks? punter. He has averaged 39.1 yards on 39 punts this season. As for the return game, Oregon freshman Charles Nelson has been solid. He leads the Ducks in both kickoff and punt return yardage, including taking two punts to the house.