How do you beat Oregon? Rich Rodriguez has the answer 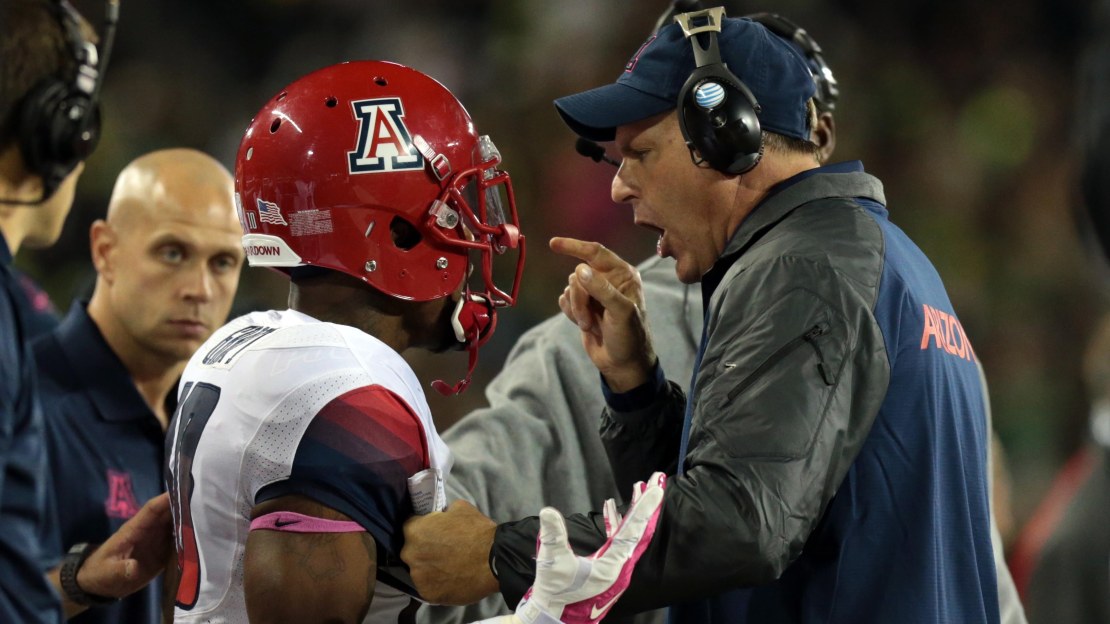 Oregon will arrive in Texas to play Ohio State for the national championship with a 13-1 overall record. That one Ducks? loss? It was against Arizona back on Oct. 2 in Eugene. The Wildcats waded into Autzen Stadium and took a 31-24 decision. Oregon hasn?t lost since.

But on that Thursday night, 24-point underdog Arizona stunned the Ducks. "They're probably having a good time in Tucson, Arizona, right now," Wildcats coach Rich Rodriguez said after that game.

Quarterback Marcus Mariota may not have been 100 percent after he was sacked seven times in a win at Washington State in the Ducks? previous game. He hit 20-of-32 passes for 276 yards with two touchdowns against the Wildcats. And Arizona limited Mariota to nine carries for one yard with a long run of seven yards.

The Wildcats sealed the victory when they stripped Mariota of the ball and recovered it. Regardless of Mariota?s health that night, Oregon got punched out by Arizona, which held the Ducks to just 4-of-14 on third-down conversions and was even in the turnover battle (two apiece).

The Ducks paid the Wildcats back with a 51-13 loss in the Pac-12 Championship game.  But how did Arizona beat Oregon the first time? I talked to Rodriguez about it. Here is the Arizona coach in his own words.

Two years ago when we played them at our place, it was one of the cleanest games we?ve ever had from an offensive standpoint. (Arizona won, 42-16) We had no turnovers. If you don?t turn it over, no penalties and have zero negative plays, you will win 100 percent of the time. Not 99.9 percent of the time-100 percent. But it?s hard to do. I don?t know if anyone has had a game like that. But I think we only had two negative plays-a 5-yard penalty and a 2-yard loss. Everything else was a positive play-or at least not a negative play. We played really clean on offense and scored some points, and we generated a couple of turnovers.

This year, we didn?t play as clean, but we got a few turnovers and were opportunistic when we got them. So, our guys had confidence going into this season?s game based on what we did the last time we played them. Our guys felt they could play with them.

It?s not the same pressure as playing a Georgia Tech, which gives you limited possessions. But there is pressure playing Oregon because you know they are going to score, so possessions are pretty important. So you don?t want to waste them.

I think (Marcus) Mariota is the difference. He?s gonna make plays. When you have explosive playmakers, they help you convert the third-and-longs and hard-to-convert situations. A normal player may not be able to do that.

You have to tackle well in space. When you get them in-third-and-long, you can?t let Mariota scramble through the second level ? you have to get to him quick. Guys like that, you can?t give them time to bounce around, scramble to the second level and outrun your linebackers. You have to get to him and not let him around. He?s too fast. He was faster than our DBs. We got to him quicker, not necessarily by blitzing but by constricting the pocket a little bit and tackling him before he got going.

I don?t think they are vulnerable in any way. They are pretty athletic at wideout. Scheme-wise, if you aren?t disciplined, somebody will be running by you. They talk about eye discipline. You have to be assignment sharp and not do something outside the realm that?s called. Teams like Oregon that run the spread and go fast, you not only line up quickly on defense, but you also need to put your eyes in the right spot. That is where they get a lot of big plays. You get in a hurry lining up and your eyes aren?t where they are supposed to be and the next thing you know it?s a touchdown.

They are athletic on defense. They are big, tall athletic guys. They do a good job of getting off blocks and they can bat passes down up front because they are so tall, 6-7, 6-8. They won?t try to fool you. You know where they are going to be most of the time. But the scheme is pretty unique where they will have some guys in space that can be unblocked and you have to make sure you put a body on him. If you get a body on body, you are OK. But they like to scheme where they have a guy free.

Running the ball is important against their defense. But more than that, first downs are important-getting first downs.

Being a Pac-12 guy, I?ll take Oregon to win. But I think it?s gonna be a great game. I don?t know much about Ohio State. I haven?t seen them much. I know what a great job Urban (Meyer) does. And his kids play with an edge. It?s gonna be fun to watch.