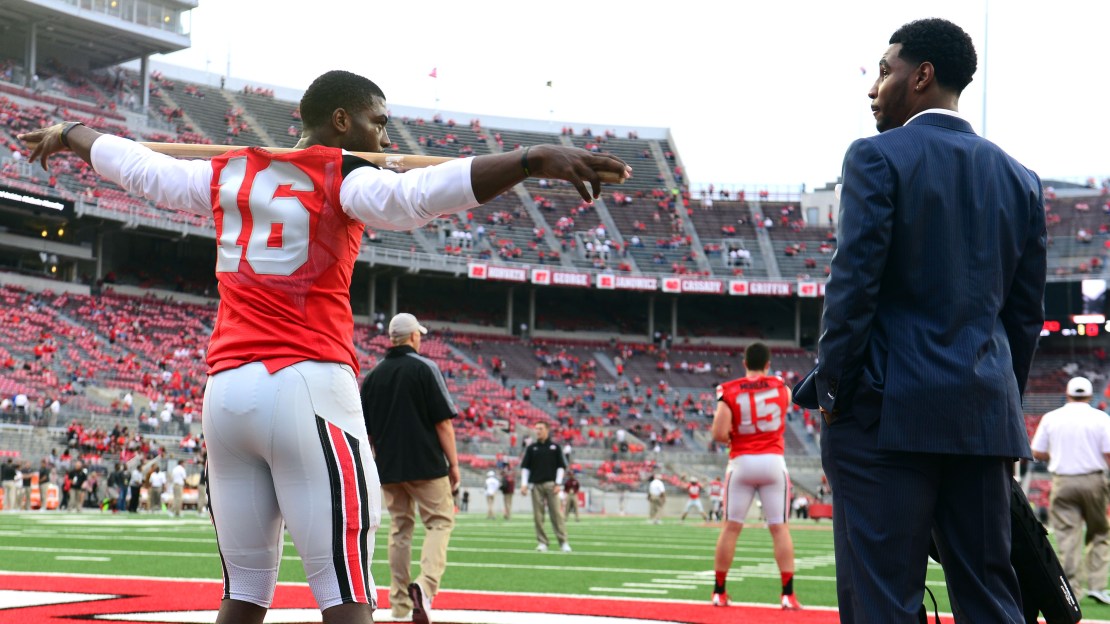 With the football season hitting its apex and the Big Ten playing a major role, I reach into my Big Ten Mailbag to answer your queries. The Jim Harbaugh hires continues to resonate.

What do you think Ohio State will/should do with the quarterback situation next year? Will Braxton Miller transfer? – Josh

It is an interesting conundrum, isn?t it? Miller will be back from a shoulder injury that ended his season in August. J.T. Barrett will be back from a broken ankle that ended his season vs. Michigan. Cardale Jones will be back perhaps as a national championship-winning quarterback. All three have played well in the past. I think Miller will transfer-and rumors already are percolating. He has one year of eligibility left. If he graduates, he can go play for any FBS team in 2015. Barrett is the best all-around quarterback and should be No. 1 in 2015, I think. Jones has been impressive but remains more of a work-in-progress.

Being a Nebraska fan, I am proud of Michigan State, Wisconsin and Ohio State. To me, the offensive lines of all three of those teams should get game balls. – Jack Grady

Good point. Any coach will tell you that the game is won in the trenches. The fronts for the Badgers and Buckeyes helped pave the way for big days for Wisconsin?s Melvin Gordon and Ohio State?s Ezekiel Elliott, respectively. And on MSU?s game-winning drive, Connor Cook had all day to throw. Credit the ?big uglies.?

What is your prediction for Michigan next year? – Frank Howell, Jr.

The Wolverines will welcome back some talent, especially on defense. The key will be the offense. The line needs to finally come together. And some go-to wideouts need to emerge. But more than anything, new coach Jim Harbaugh needs to figure out who is his quarterback. Just from the Harbaugh factor alone, I think this will be a seven-win team-with potential for even more.

What are the Xs and Os of Jim Harbaugh's offensive philosophy? – dschuetz1

At his previous stops, Harbaugh has run a conventional offense that is built around a physical rushing attack. Play-action passes are executed off of that. Bottom line: It?s very much like a pro-style offense. This should be appealing from a recruiting standpoint, while meshing well with the philosophy of former Wolverines coaches like Bo Schembechler and Lloyd Carr.

How long before Michigan is a contender on the national scene? – Bob McCarthy

It may be a matter of just a couple years. Harbaugh isn?t walking into a barren situation in Ann Arbor. Brady Hoke accrued some talent, leaving the roster in pretty good shape. Having Harbaugh?s coaching acumen and swagger will make a big difference. Put it this way, it didn?t take Harbaugh long to make Stanford-a lesser program in worse shape than Michigan when he arrived-a top program that was in the Orange Bowl in just his fourth season with a 12-1 record. His win totals at Stanford went from four, five, eight to 12.

Do you see the Big Ten realigning, with Ohio State, Michigan State as dominating teams in the East, as well as Penn State and Michigan returning to their lofty standards? Or is this just a cycle that needs to run its course ? The East is clearly superior with the above mentioned four teams. The best of the West is Nebraska or Wisconsin. And the division is clearly weaker. – Andrew Landers

That was the worry from the moment the new divisions were announced Yes, things go in cycles. The West will rise and be better than the East from time to time. But I think for a preponderance of the years, the East will be superior. As for realignment, it won?t happen. The league wanted to draw geographic lines, and that what we have. The old Leaders and Legends were about trying to have competitive balance. And, it didn?t work.

How much do you think the Big Ten owes to Gary Andersen? He coached Wisconsin to a disgracefully poor showing in the league championship game, helping put Ohio State in the playoffs. Then, he had the good graces to leave and turn the reins over to Barry Alvarez, who led the Badgers to victory over Auburn in the Outback Bowl. Does anyone think Andersen would have led the Badgers to victory? – Wezilsnout

Interesting observations. That?s all I?ll say about that.