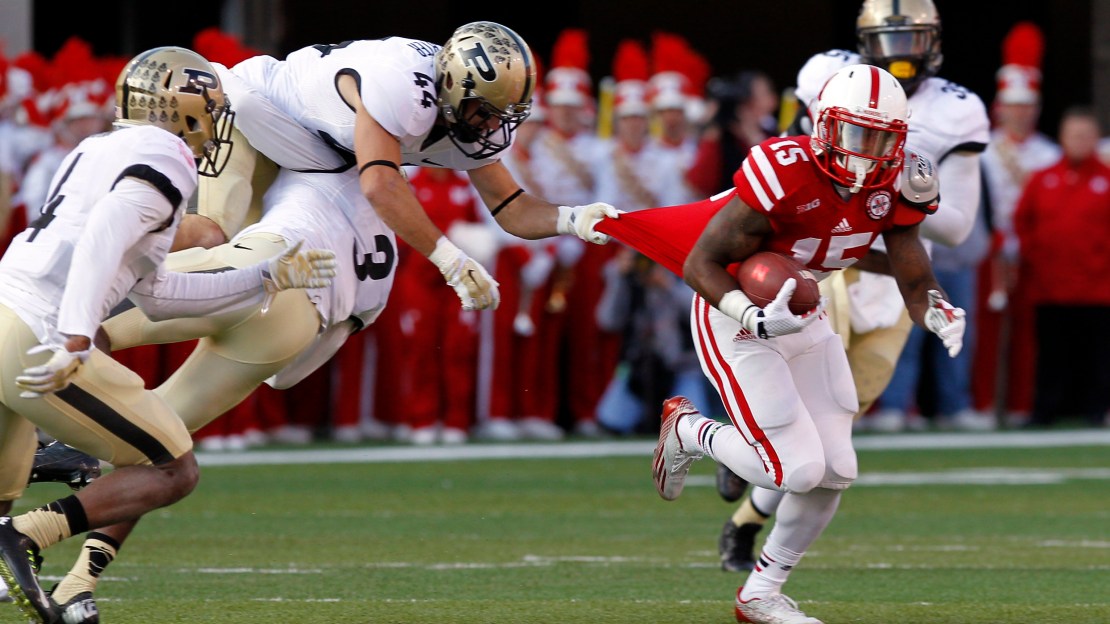 Attention, Nebraska fans: Here is a good look at Mike Riley?s offense at Oregon State from Sam McKewon of the Omaha World-Herald.

The last uniform has been washed at Iowa. So, naturally, that means it?s time to project the starters for 2015. The Hawkeyes had 10 senior starters in 2014.

Yes, quarterback will be scrutinized, but who will take Brandon Scherff?s left offensive tackle slot? How about sophomore Boone Myers, a former walk-on.

On that same note, here is a good look-ahead to Minnesota in 2015 from the Star Tribune.

Chief on the to-do list for Jerry Kill: replace key playmakers RB David Cobb and TE Maxx Williams from what already has been a pedestrian offense.

Jim Harbaugh is starting to put together his staff, recently reportedly tabbing Tim Drevno as his offensive coordinator.

Mike Griffith of Mlive.com has five parting shots from the Spartans? heart-stopping Cotton Bowl win. Going into the offseason with a loss would have been exasperated by the mojo at Ohio State (playing for national title) and Michigan (Harbaugh hire).

Speaking of Michigan ? Athlon Sports has three early obstacles for Jim Harbaugh and his khaki pants to overcome.

As you would suspect, one of the areas is quarterback, a position that lacked consistency under Brady Hoke. Oh, and the pieces around the quarterback also need to be addressed-especially the line and wideouts.

I don?t know about you, but I?m excited to see how Rutgers DE Kemoko Turay develops. The guy is an athletic freak who is just scratching the surface after an exciting debut in 2014.

The redshirt freshman tied for seventh in the Big Ten with 7.5 sacks in his debut season. He also had three blocked kicks, which tied for the most in the nation. It was only Turay's second season of football, as he played just one year at Barringer High in Newark.

There are many interesting storylines in the national title game between Ohio State and Oregon. And there is one huge similarity: the offenses. They basically are identical, as each program has studied the other.

George Schroeder of USAToday says that schematically, they're very similar, too, starting with a commitment to hard-nosed, power running from the spread. One difference is tempo. The Ducks want to go as fast as possible. The Buckeyes vary their speeds based on the situation.

In case you haven?t noticed, Michigan State is off to its worst start in a decade. But Tom Izzo and Co., aren?t panicking. Last night?s dominating win vs. Indiana helps.

MSU has played many good teams closely. And has largely done so without a fully-stocked roster. Forward Branden Dawson will still be wearing a wrist brace but is on the mend. Forward Javon Bess has made a "50 percent turnaround" from a sprained ankle in recent days, according to Izzo. Guard Alvin Ellis is close to 100 percent. Kyle Austin of Mlive.com says another issue is more confounding, and it's the biggest one this team faces: it can't close out late leads against good teams. Who is this team?s go-to scorer in crunch time?

The gang at InsideNU.com seems miffed by the ?inexcusable underuse of Alex Olah.?

Without Olah as a presence, Northwestern's offense can struggle, notes InsideNU. It's becoming increasingly clear that the Wildcats need to involve the big man more if Northwestern wants to make a move.