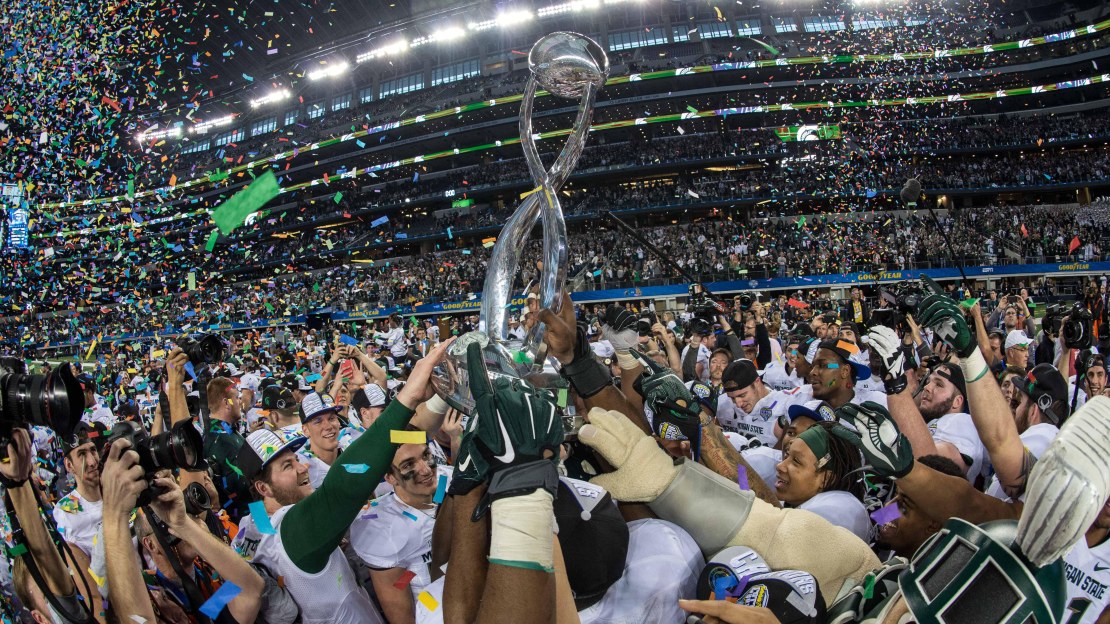 How exciting was that? Down 20 points in the fourth quarter, Michigan State rallied to stun Baylor, 42-41, in the final seconds in the Cotton Bowl on Thursday.

The Spartans have won four straight bowl games since their 49-7 loss to Alabama in the 2011 Capital One Bowl, and they've trailed at halftime in each one.

Michigan State finishes the season 11-2, with its lone losses at No. 2 Oregon and vs. No. 4 Ohio State, both of which are in the inaugural College Football Playoff.

Best play: It has to be the game-winner, right? The Spartans trailed by 20 points in the fourth quarter and still rallied to stun Baylor on this 10-yard Connor Cook-to-Keith Mumphery touchdown with 17 seconds left.

Honorable mention has to go to the late blocked field goal that allowed for the comeback and led to this incredible hit.

MSU had a 1.5% chance of winning the #CottonBowl when Sparty was down 20 early in the 4Q. Here's the winning play: http://t.co/nModPC5FkM

Best player: RB Jeremy Langford. So consistent, so reliable, so underrated, the Spartans star running back ran for a game-high 162 yards and three touchdowns. The 100-yard effort was his 10th straight; the three-touchdown day marked his seventh straight multi-score game, a span in which he's scored 18 (!) times.

Best moment: Teammates congratulating Connor Cook after the game-winning touchdown with 17 seconds left. Cook missed a few late throws, including what looked like a game-sealing and forgettable interception. No worries, the clutch quarterback forgot about the turnover and the errant throws on his way to adding another clutch performance to his ledger.

This was a great moment, as well.

These two did some great things. Best of luck to Coach Narduzzi at Pitt. pic.twitter.com/h71xigFHzY

Best stat: 0.9, yards per carry for Baylor, which totaled 20 yards on 22 carries. Keep this in mind: Baylor RB Shock Linwood ran for 1,226 yards this season.

Offense: A. Cook had a few head-scratchers, sure, but the unit amassed 549 yards en route to scoring 42 points. Per usual, the Spartans were balanced, too, rushing for 238 and throwing for 314. This is one of the nation's top offenses, plain and simple.

Defense: C+. The unit made the plays when it had to and it limited Baylor to 20 yards rushing, but Bryce Petty and company racked up 603 yards through the air. The Baylor signal-caller completed 36-of-51 passes (71 percent) for 550 yards and three touchdowns.

Special teams: B+. The Spartans went for a fake field goal on their lone would-be attempt, which failed, but Michael Geiger hit all six of his extra points, they recovered a late onside kick and, most importantly, they blocked a late field goal to set up the comeback.

It was over when: Michigan State sacked Petty on the first play of Baylor's final drive that started with 17 seconds left. That pretty much erased any chance of the Bears getting into Michigan State territory and attempting a potential game-winning field goal.

A look toward 2015: Mark Dantonio has built an annual contender, and the Spartans are certain to be in the Big Ten East mix. Connor Cook will be back, which is big, and even with star DC Pat Narduzzi headed to Pitt, the defense should remain a strength.