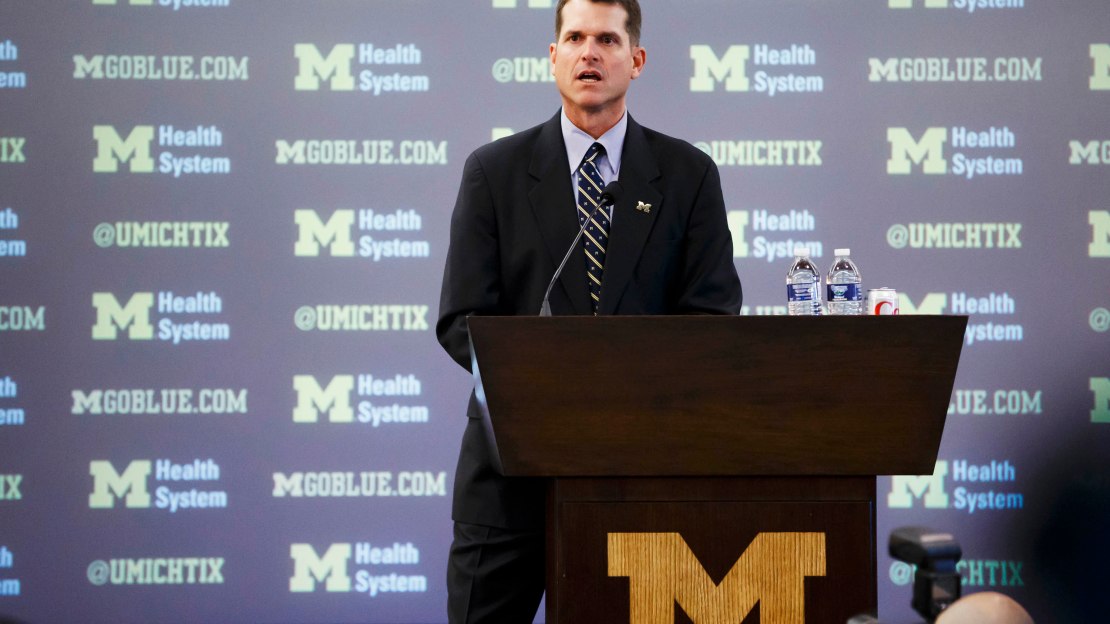 As you would suspect, the reaction to Jim Harbaugh?s hiring at Michigan created quite a wake around Big Ten country. Here are some reactions from various outlets. Let?s begin with some video of Harbaugh addressing the Crisler Center crowd at a basketball game on Tuesday.

He?s already a rock star. And Harbaugh?s mojo must have helped the Wolverines rally to beat Illinois.

Pennlive.com: Michigan?s coaching hire is a boon to the Big Ten and Penn State.

Good story here on Wisconsin?s offensive line, which is looking for redemption after a rough effort in a 59-0 loss to Ohio State in the Big Ten title game.

"The whole game was uncharacteristic for us. I could go on and on and on."

Without a doubt, if this unit flounders on New Year?s Day, the Badgers will have little chance to win ? again.

Amelia Rayno of the Minneapolis Star Tribune has a nice hoops preview with league play underway.

A big early storyline: Can Michigan snap out of its doldrums? How do you explain losses to NJIT and Eastern Michigan? My money is on John Beilein getting the Wolverines on track. He got a start in that direction with the aforementioned win vs. Illinois. Look out!

Great way for Iowa to open the Big Ten season, winning at Ohio State. Cool video here of the Hawkeyes coming off the court after their big victory. Iowa REALLY needed this after an uneven non-conference effort.

Bob Flounders of Pennlive.com has an interesting look at Nittany Lions quarterback Christian Hackenberg, who has thrived early, late and on the road in each of his two seasons.

A bummer for Rutgers: TE Tyler Kroft has declared for the NFL draft.

No real shock. HuskerOnline.com notes that Gregory is ranked as the No. 4 overall player in the draft by ESPN's Mel Kiper Jr. and No. 5 by Todd McShay. Gregory will likely need to add some weight to play at the next level. He could play either defensive end or outside linebacker in a 3-4 system.