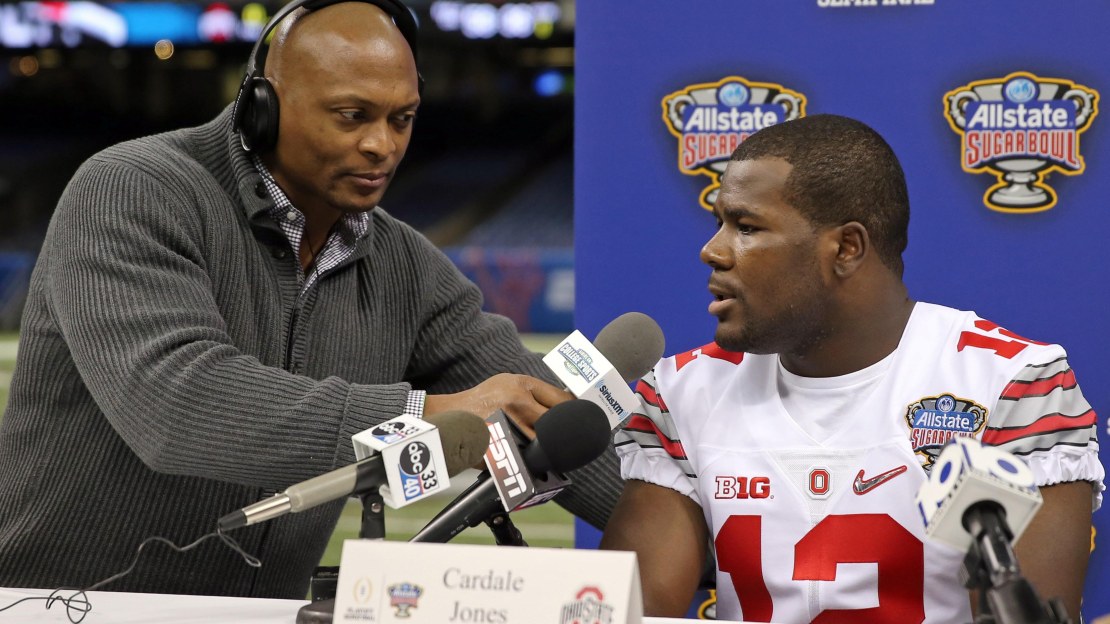 NEW ORLEANS — America loves the underdog. And it may love the upset even more. Welcome to Ohio State's world, where it is an underdog with a shot–maybe even a good one–to upset Alabama in the Sugar Bowl.

We all remember the oh-my-gosh upsets of recent vintage. Stunners like the USA over Russia in the 1980 Olympics ? Ali over Foreman in 1974 ? N.C. State over Houston in 1983 ?

No. 4 seed Ohio State could add to the upset lore with a win vs. No. 1 seed Alabama on Thursday night in a national semi-final playoff game. If the Buckeyes win over the Crimson Tide, it wouldn?t rate on the same level as the aforementioned upsets. But it would be a doozy and one of the best David-beats-Goliath stories in the last decade of the sport.

Ohio State has been in this role before. Flashback to the Fiesta Bowl after the 2002 season, when the Buckeyes were a heavy underdog to Miami (Fla.). This was a monster Hurricanes team that was coming off a national championship and was riding a 34-game winning streak. Some of the players that dotted Miami?s roster were Willis McGahee, Antrel Rolle, Jonathan Vilma, Andre Johnson, Kellen Winslow, Jr. and Sean Taylor. Loaded.

The Buckeyes were good, but could they really beat Miami? Ohio State surprised everyone with a 12-0 mark in the second season under Jim Tressel. OSU rode a strong defense and offense built around freshman running back sensation Maurice Clarett. The Buckeyes carried that mojo to Tempe and shocked the world by beating Miami to win the national championship. The Big Ten hasn?t won a title since.

That brings us to this stage in New Orleans. Ohio State is just supposed to be happy to be here after losing not one, but two, quarterbacks. Can the Buckeyes possibly beat a Nick Saban-coached team with a third-string quarterback who has made one career start?

?I think it's just a great opportunity,? said Ohio State coach Urban Meyer. ?I think the players, the one thing sometimes we'll talk more about coaches than players and that's not the case in this game. Alabama's recruited and they develop their players very well. So it has the full attention of our players, which is most important. But there's a history between Coach Saban and myself and I made the point to our players – I hope they say it about us, too – that every phase is on point.?

Beat the Tide, and Ohio State will advance to the national championship game to play the winner of the Rose Bowl battle between Oregon and Florida State.

A win over the Crimson Tide also would do much for Big Ten pride. The conference has struggled in bowl games, especially against the SEC. The Big Ten is just 5-10 vs. the SEC since 2009. A win vs. mighty Alabama would be a salve on those hard times-and perhaps help set in motion a change of fortunes in the SEC-Big Ten narrative.

The SEC really began to emerge as the nation?s dominant conference with a win vs. Ohio State. Go back to the BCS title game after the 2006 season, when heavily favored OSU lost to Florida-a team coached by none other than Urban Meyer. After that stunning defeat, the SEC ripped off a run of seven national titles in a row-including a victory by LSU vs. Ohio State in the BCS title game after the 2007 season.

So, it would be fitting if it?s Meyer who fires an opening salvo and helps turn the worm for the Big Ten. In three scant years, Meyer has built an Ohio State squad that closely resembles an SEC club.

?I think the gap's closing a little bit,? said Meyer. ?I think when I was a head coach at Bowling Green, I believed speed wins.  Obviously the other intangibles of toughness and character and perseverance and the time-tested qualities of a good football team, good football player, will never change.

?However, the game is getting faster. That was I'd say back in 2001 when I first became a head coach that that was the days of playing in a box, that's normally not what an offensive football gives the defenses trouble. So, we wanted to spread the field and try to recruit as much speed as possible. And we did that at Florida.?

Players like Jalin Marshall, Darron Lee, Dontre Wilson, Joey Bosa, Eli Apple, Vonn Bell and Curtis Samuel, among others, have helped make Ohio State the fastest and most talented team in the Big Ten–a team that looks a lot like an SEC team.

?Are we SEC speed in certain positions?? said Meyer. ?We certainly are. But that's all relative. We'll find out. But there's no question that speed is maybe a defining point or in the conversation of SEC, when you hear the front seven on defense, I've heard that for years, that there's a lot of truth to that. The front seven in the SEC, now is that – our front seven is pretty good, too. They're faster than we have been when we first got here. And that's certainly – when we go out recruiting, the days of having a slow defensive lineman or linebackers that can't play in space, those days are gone. We're getting faster and that process never ends."

The rub for Ohio State, of course, is the quarterback spot with Cardale Jones. That?s why the Buckeyes find themselves in this underdog role as they try to score a big win vs. the SEC for the Big Ten, which also has Wisconsin playing Auburn in the Outback Bowl, Minnesota taking on Missouri in the Citrus and Iowa battling Tennessee in the TaxSlayer.

?We're responsible for Ohio State,? said Meyer. ?But it is important as is every bowl game. There's one way to change perception, not talk about it, go play very well. Recruit very well, play very well and perception's changed. And I go back to '06 when the Big Ten was king – top of the – you know, the Pac 12 is great football. Big 12, ACC won a championship and there's a team, Florida State hasn't lost a game in two years. So I think it's great conversation. I think there's a lot of truth to it. But the Big Ten, this is a great opportunity not just for Ohio State but all the bowl teams to do very well.?