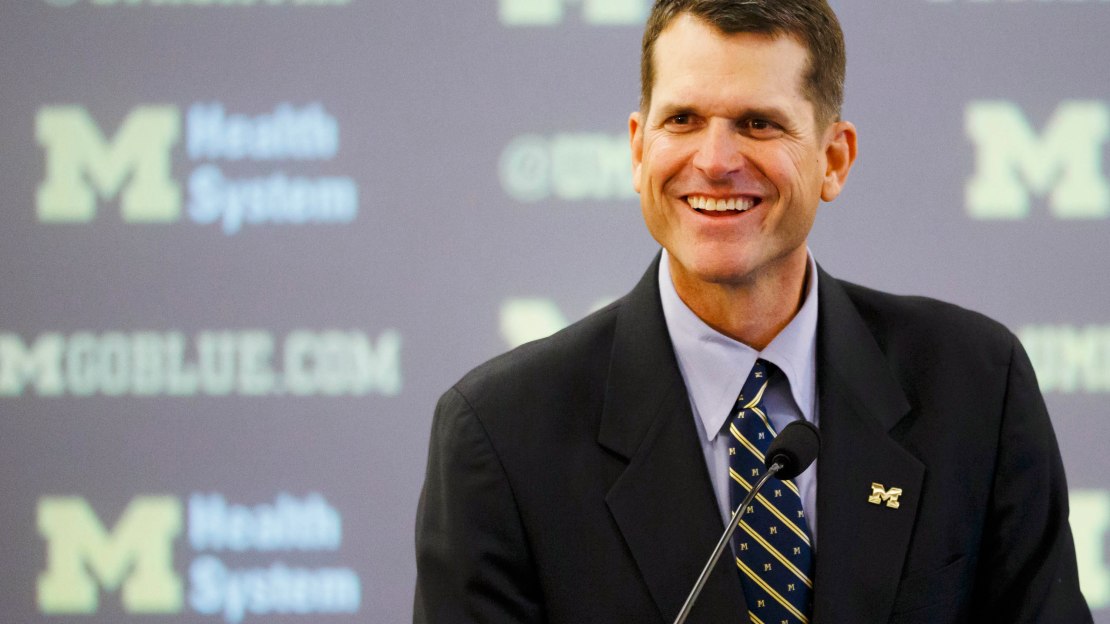 Well, it's official: Michigan has its man, tabbing Jim Harbaugh as head coach.

A.D. Jim Hackett said he wasn't concerned with hiring a "Michigan man." In fact, he detested the phrase. Well, it turns out, Hackett landed the ultimate "Michigan man" in the former star Wolverines quarterback and son of a Michigan assistant coach who was coached by Bo Schembechler. Harbaugh's arrival has energized the fan base and made things even more interesting  in the Big Ten.

Here are five things I?m looking forward to now that Harbaugh is ensconced once again in maize and blue.

1. Attitude. Harbaugh will inject a mega-dose of it into a program that needs it. One of my all-time fav moments in recent college football annals was when Harbaugh verbally jostled with USC's Pete Carroll back in 2009. A vexed Carroll asked Harbaugh after getting routed by Stanford: ?What?s your deal??

The point: Harbaugh isn?t going to back down from anyone–not even mighty USC. It was an awesome statement and helped set an attitude at Stanford that continues to live on today. On that note, I can?t wait to see Harbaugh and Penn State?s James Franklin battle. Michigan vs. Penn State could bloom into a fun, intense rivalry with these ultra-competitive alpha wolves at the controls. No two league coaches are more intense or high-strung.

2. Jim vs. Urban. Honestly, can it get much better than this? Two larger-than-life personalities with bravado and machismo to match their coaching wits. The Ohio State-Michigan rivalry hasn?t been much of a rivalry of late, hitting a high point in 2006 when No. 1 Ohio State beat No. 2 Michigan 42-39. The series now looks more like the Globetrotters vs. the Washington Generals. The Buckeyes have won three in a row, 10 of 11 and 12 of 14. No way Harbaugh lets this dominance continue. College football needs the luster restored to this classic rivalry.

3. Michigan mattering. Let?s be honest, because it?s all there in black and white: The Wolverines have slipped from relevance on a national level. The program hasn?t been the same since Lloyd Carr retired after the 2007 season, cycling through Rich Rodriguez (never supported) and Brady Hoke (overmatched) to go 46-42 overall and 24-32 in the Big Ten from 2008-14. The arrival of Harbaugh seemingly will improve the program?s lagging fortunes-and may make Michigan not just a Big Ten title contender but also a national championship contender. How long has it been? The Wolverines last won the Big Ten in 2004 and a national title in 1997.

4. Burying the ghost of Mike Hart. The Michigan-Michigan State series is another fiery rivalry that has been doused with Michigan?s struggles. Mark Dantonio has turned the worm in this series, winning six of eight meetings since arriving in East Lansing in 2007. In fact, he has won six of the last seven since losing his first clash with the Wolverines. That loss in 2007 fueled Dantonio and the Spartans, as Michigan running back Mike Hart chided Michigan State by calling the Spartans the ?little brother? to Michigan. The Wolverines never really have been the same. Meanwhile, MSU has soared.

5. Big Ten rising. For that matter, the arrival of Harbaugh is good for all of college football. He?s lauded as one of the game?s brightest minds, a rare breed who has succeed in both the college and pro games as a coach and a player. It?s unusual for a former star player with a big bank account to have the fire and desire to grind it out as a coach. Harbaugh does, and that should tell you a lot. His arrival should push the Big Ten closer to the SEC, as all the Big Ten coaches will have to crank it up to keep pace with Harbaugh?s hair-is-on-fire tempo. That should make everyone better.