Wisconsin season review: This was a classic Badger squad 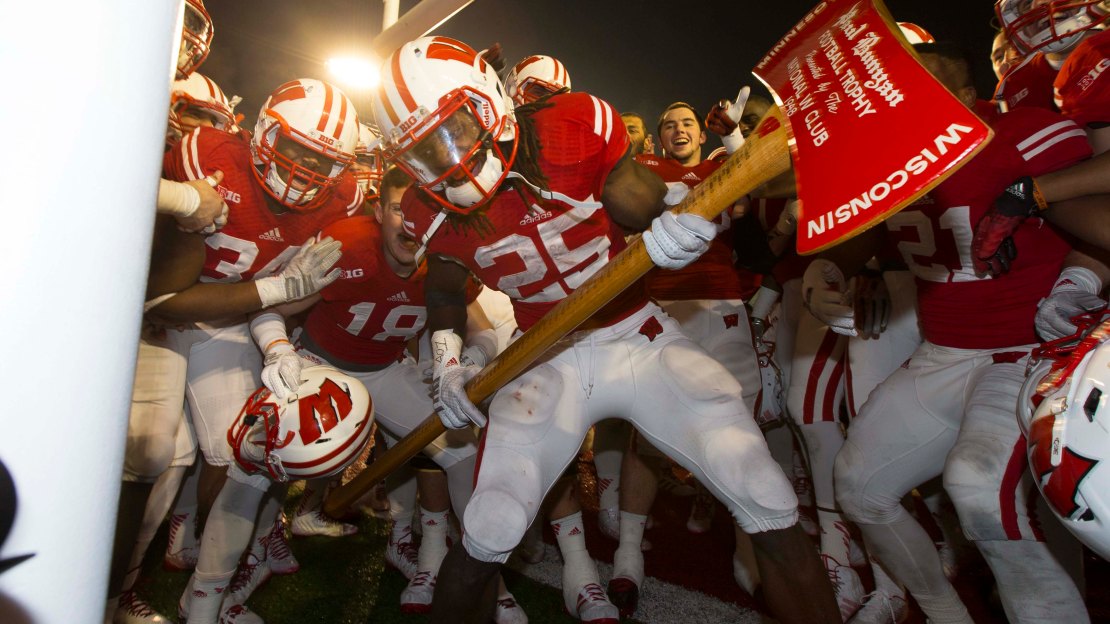 Wisconsin maintained its status as one of the Big Ten?s premier programs, winning the Big Ten West and advancing to the league title game for the third time in the game?s four-year existence.

This was a classic Badger squad built around another physical running game that ranked No. 1 in the conference (314.0 ypg). The defense also set a deadly tone all season in ranking among the best in the Big Ten, utilizing an aggressive and confusing 3-4 scheme.

Despite that continued success, Wisconsin found itself looking for a coach for the second time in two seasons, as Gary Andersen shockingly bolted for Oregon State after going 19-7 overall and 13-3 in the Big Ten. A.D. Barry Alvarez acted quickly in tabbing Pitt coach and former Wisconsin player and coach Paul Chryst to take over a program that has had a rocky end to 2014.

High point: No. 18 Minnesota was rolling into Madison fresh off a win at No. 23 Nebraska for a showdown with the No. 14 Badgers. The stakes: The Big Ten West title-and Paul Bunyan?s Axe. Wisconsin fell behind, 17-3, in the second quarter. But the Badgers assumed command from there en route to taking a 34-24 win with Melvin Gordon running for 151 yards and Joel Stave passing for 215 yards and two touchdowns. The victory pushed Wisconsin?s winning streak to seven games and set up a clash with No. 5 Ohio State in Indianapolis for the Big Ten championship.

Low point: The 20-14 loss at Northwestern was stupefying. But Wisconsin ripped off seven wins in succession after that as it entered the Big Ten title game vs. 11-1 Ohio State. The Badgers got shredded, falling behind 14-0 after one quarter and 38-0 at halftime on the way to a 59-0 blowout loss to a Buckeyes squad that was starting third-string QB Cardale Jones for the first time. OSU outgained the Badgers, 558-258, and bottled up RB Melvin Gordon, who ran 26 times for 76 yards (2.9 ypc) with a long run of 13 yards. It was a humiliating night in every way, shape and form. The following week with the program?s head still spinning, Andersen shocked by bolting Wisconsin for Oregon State.

Offensive MVP: Melvin Gordon enjoyed a season for the ages as he threatened the FBS single-season rushing mark. He has 309 rushes for a Big Ten record 2,336 yards (fourth-most in FBS annals) and 26 TDs. He was at his best vs. No. 16 Nebraska, when the junior ran for a FBS single-game record 408 yards in a 59-24 win on Nov. 15. Gordon was the Heisman runner-up, Doak Walker Award winner and Big Ten Offensive Player of the Year.

Defensive MVP: There were no singular studs on this outstanding defense that was No. 3 in the Big Ten in scoring (20.0 ppg) and No. 2 overall (283.2 ypg), but LB Derek Landisch was the closest thing. The senior was first-team All-Big Ten by the coaches and a second-team choice by the media. Landisch finished with 77 tackles and was fourth in the Big Ten in sacks (9.0) and fourth in tackles for loss (16.0).