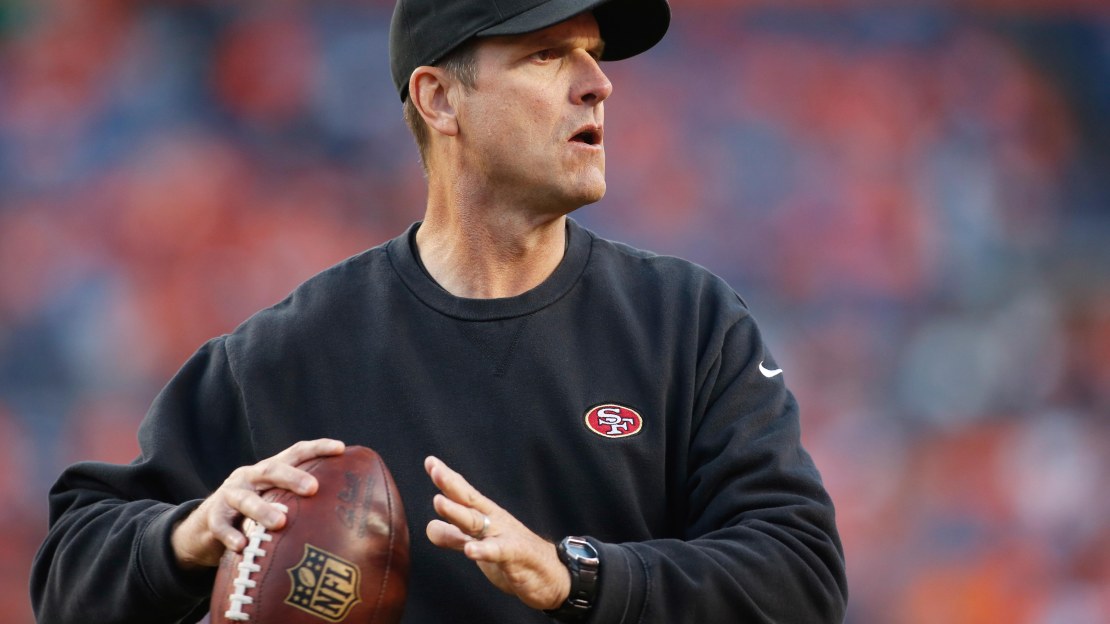 Nick Baumgardner of Mlive.com sums up the apparent hiring of Jim Harbaugh by Michigan: ?It?s a grand slam.?

This wouldn?t be just a big move for Michigan. It would be a huge move for the Big Ten ? and college football. A true game-changer would be joining the sport.

Penn State denizens are still buzzing over that Pinstripe Bowl win. Why not? When the Nittany Lions fell behind, 21-7, in the second half, I thought they were done. But Christian Hackenberg rallied the team to a tie and then a win in OT. What a victory to build on for a program on the rise.

Here is a nice gallery of photos from the game.

Like Penn State, Rutgers is coming off a nice bowl win. And, also like Penn State, the Scarlet Knights have a bright future. But there is a big question that hangs over the program: Will OC Ralph Friedgen be back?

No doubt, the Fridge had a big impact on the RU attack.

"Coach Friedgen has been such a positive for this program," Kyle Flood said on his radio show recently. "I have learned a tremendous amount from being able to spend this season with him, things that are going to help me be better as I go through the rest of my career."

News that WR Donovahn Jones has been suspended by Minnesota for a violation of team rules isn?t good. This is already a squad that?s starved for big-play wideouts. Jones was one of the Gophers? best.

Joe Christensen of the Minneapolis Star Tribune notes the loss will leave the Gophers thinner at receiver against Missouri. Drew Wolitarsky will be back from his high-ankle sprain, and they'll have Isaac Fruechte and KJ Maye, but no other wide receiver on the team has more than one reception.

If Wisconsin had issues with Ohio State?s offense in the Big Ten title game, wait until the Badgers get a load of the Auburn attack.

Badgers DC Dave Aranda said the Tigers have the best group of receivers he?s seen since he?s been at Wisconsin, a big reason why 6-6 quarterback Tanner McEvoy will have a role at safety in the Outback Bowl.

?They?re pretty good at just throwing it up, and they?ve got some guys that can go get it,? McEvoy said. ?I think that?s where I can maybe help out, use my size to be able to get those balls.?

The non-conference season hasn?t gone smoothly for Iowa. But Chad Leistikow of HawkCentral.com has five reasons for optimism with Big Ten play about to begin.

I still believe in Fran McCaffrey?s team. Now is the time to work out the kinks. And aside from Wisconsin, this league looks pretty wide open.

"The thing is in the nonconference, there's a tendency to not take every game as serious as league games. And we didn't do that," Iowa senior Aaron White said. "Whatever team came in here, we had the mindset that we've got to take these guys out, and we did that."

Speaking of non-con action ? The great Loren Tate of the Champaign News-Gazette is ready for Big Ten action. Join the club.

The comparisons at Indiana between Troy Williams and Victor Oladipo persist.

Zach Osterman of IndyStar.com notes that Oladipo was a better defender at the same stage of his career, and probably a better two-way player. Williams is more efficient offensively, and more careful with the ball. But their importance to Indiana's offense is beginning to parallel. Regardless, the Hoosiers need more players like Oladipo. Williams is a rising talent to get excited about.

The Top Five moments in Northwestern sports in 2014? InsideNU.com has ?em.