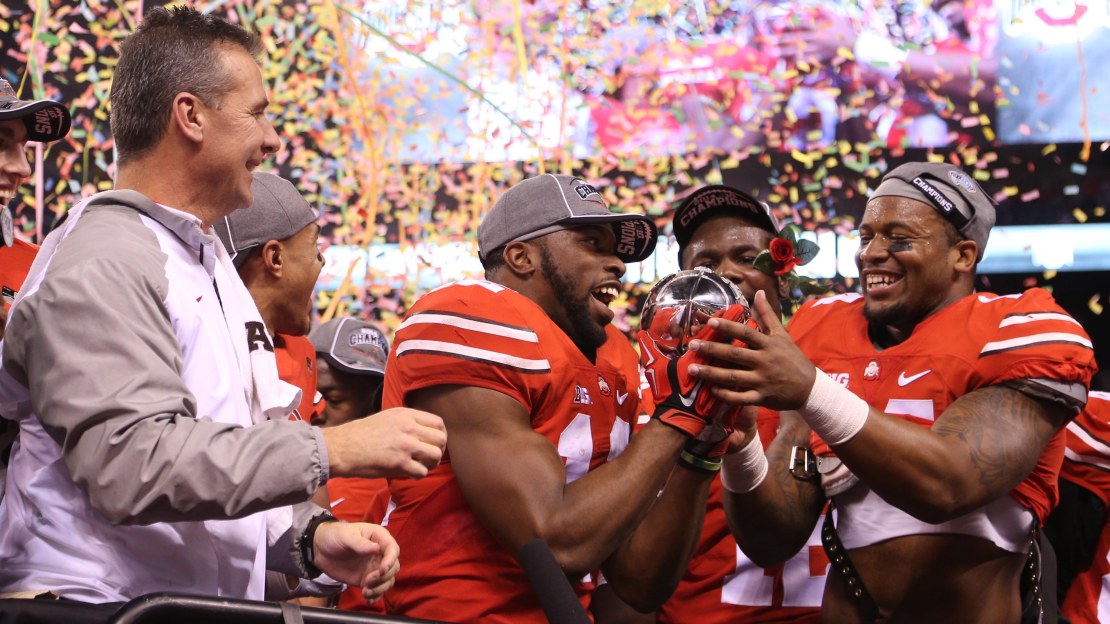 With the year coming to a close, it's time to take a look back at the Big Ten's top basketball and football teams of 2014.

1. Ohio State football. Despite losing reigning Big Ten MVP Braxton Miller to a shoulder injury in August, the 12-1 Buckeyes marched on the their first conference championship since 2009 behind redshirt freshman signal-caller J.T. Barrett. The Buckeyes then lost Barrett to injury in the fourth quarter vs. Michigan but went on to win the Big Ten title game behind Cardale Jones to earn the No. 4 spot in the inaugural playoff, taking on No. 1 Alabama in the Sugar Bowl.

2. Wisconsin basketball. After years of knocking on the door of big things for 13 seasons in Madison, Bo Ryan finally kicked it down en route to leading the Badgers to the Final Four. Once there, Wisconsin lost to eventual national runner-up Kentucky to finish 30-8. Still, it was a season to remember that was fueled by the breakout season of Frank Kaminsky.

3. Michigan basketball. Fresh off the 2013 championship game appearance, the Wolverines went 28-9, won their first outright Big Ten corwn since 1986, and advanced to the Elite Eight. John Beilein and Michigan did all of this despite losing first-round NBA draft picks Trey Burke and Tim Hardaway Jr., in addition to missing star Mitch McGary for all but eight early games. Nik Stauskas emerged as the Big Ten?s top player, winning Big Ten Player of the Year, to lead Michigan?s charge.

4. Michigan State basketball. The Spartans took some time to find their groove, thanks in large part to key injuries. But they hit their stride toward the end of the season en route to claiming the Big Ten tourney title and advancing to the Elite Eight. This was a talented team, what with Gary Harris and Adreian Payne, both first-round NBA picks, to go along with Keith Appling and Branden Dawson, among others. You have to think they would have finished better than 29-9, 12-6 had it not been for injury.

5. Michigan State football. Coming off a Big Ten title and Rose Bowl victory, the Spartans continued to soar in 2014. Michigan State finished 10-2, with its lone losses being to playoff teams: at Oregon and vs. Ohio State. This was the Spartans? fourth double-digit win season in five years and earned them a bid to the Cotton Bowl vs. Baylor.