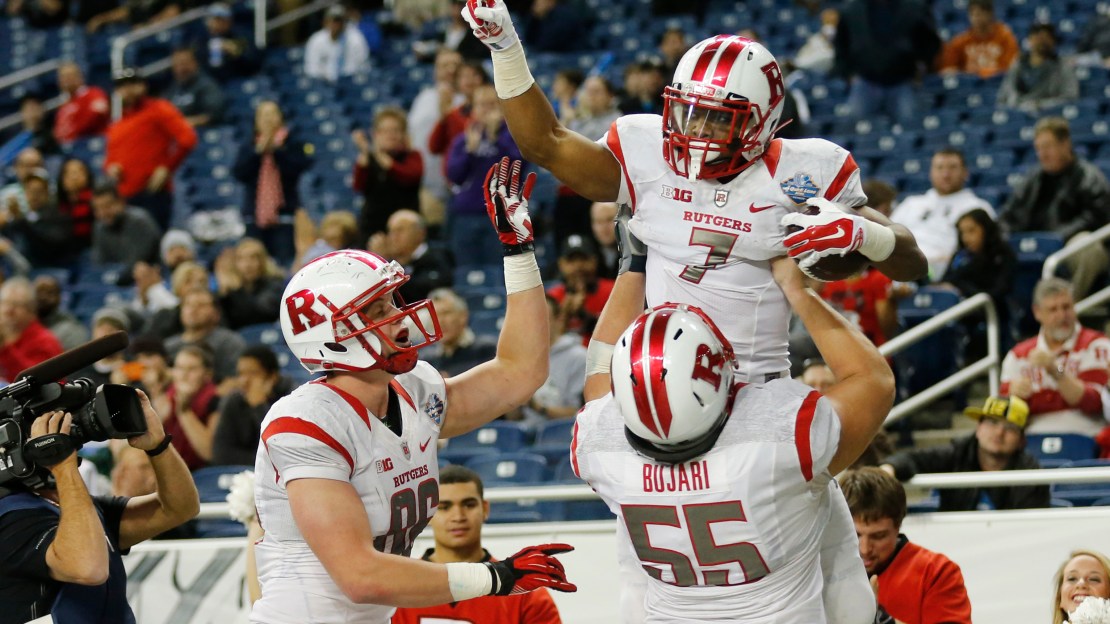 Rutgers finishes the season on an up-note, whipping North Carolina in the Quick Lane Bowl to close with an 8-5 mark. It was the Scarlet Knights? second win in a row to close the 2014 season after RU posted the biggest comeback in school annals in the finale at Maryland when it roared back from a 35-10 second quarter hole. Rutgers? Big Ten debut was a success on most every level.

Best play: There were several good moments for Rutgers. Let?s go with early in the second quarter, when Josh Hicks took a hand-off and jetted up the middle and blew by some UNC defenders before cutting left and scoring from 21 yards out. It epitomized his excellent night.

Best player: Rutgers may have a future star in RB Josh Hicks, who ran 18 times for 194 yards (10.8 ypc) and a touchdown. The true freshman has a burst and can run between the tackles. Fellow true freshman RB Robert Martin also eclipsed the 100-yard rushing mark, running 19 times for 100 yards and scoring two TDs.

Best moment: The final gun. To get this win to finish 8-5 instead of 7-6 is huge from a perception and momentum standout. Rutgers was reeling late in the season, losing three in a row and four of five before closing with two victories. It was an impressive finish.

Best stat: 332, yards rushing for the Scarlet Knights. Any time a team runs the ball this well, it?s probably gonna win. Rutgers did.

Offense: A. The RU attack was rolling, ripping off 516 yards with no turnovers. The Scarlet Knights did most of their damage on the ground with their two-headed true freshman running back tandem of Josh Hicks and Robert Martin. And QB Gary Nova also had an OK senior send-off, hitting 9-of-20 passes for 184 yards and two touchdowns. He leaves with a school career record 73 TD passes.

Defense: B-. Rutgers? defense never will be mistaken for a steel curtain, but the unit pitched a shutout in the first half before the Tar Heels made a run in the final 30 minutes. And that strong effort in the opening half coupled with two turnovers was enough to mute the final UNC numbers of 482 yards of offense.

It was over when: Robert Martin raced 28 yards for a touchdown early in the fourth quarter to push the Scarlet Knights? lead to 37-7. Shortly thereafter, Kyle Federico added a 31-yard field goal to make it 40-7 with 10:04 left in the game. There?s no way RU could blow that lead, right? Well, UNC made a mini run with two TDs to close out the game. But, it was way too little, way too late.

A look to 2015: This is a Rutgers team that surprised in its Big Ten debut by going 8-5. Work must be done next season, with QB Gary Nova gone. But lots of talent on both sides of the ball is back, including TE Tyler Croft, WR Leonte Carroo, the freshmen running backs and many key blockers up front. The defense also will be strong up front with the likes of DT Darius Hamilton back, along with E David Milewski and E Kemoko Turay. LB Steve Longa also is a good one. Expectations will be elevated next fall for this program on the rise.