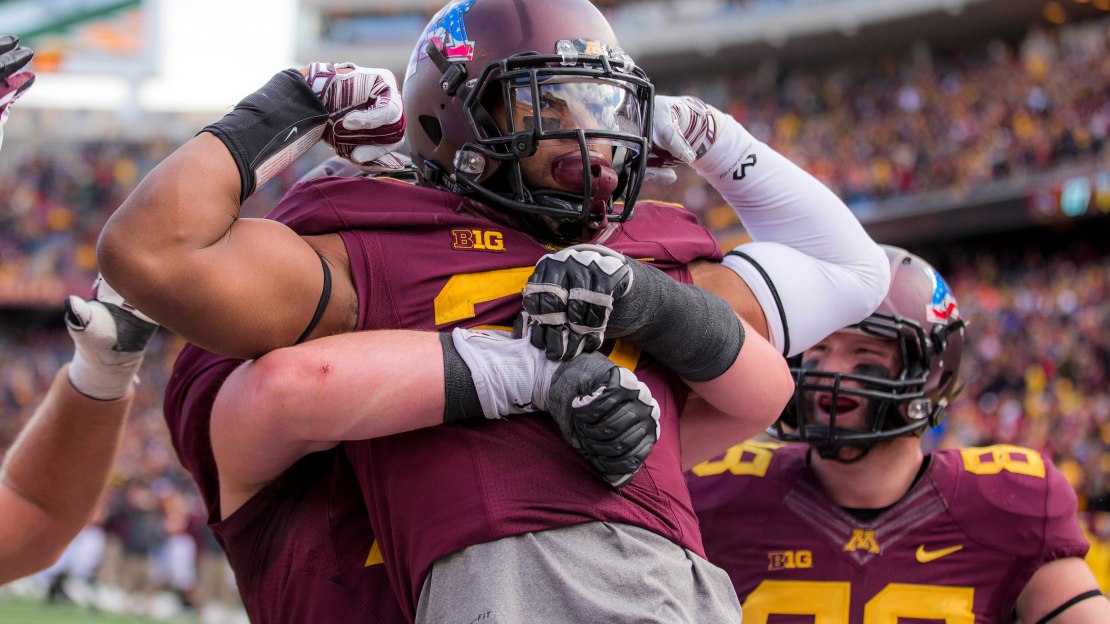 Minnesota remains a program on the rise under Jerry Kill, whose fourth season in the Twin Cities was his best yet.

The Golden Gophers will play in a bowl for the third season in a row. And it will be a New Year?s Day bowl for the first time since the 1961 season, when Minnesota played UCLA in the Rose Bowl.

The 2014 Gophers are built around a physical offense that ranks No. 6 in rushing (224.6 ypg) and a defense that helped Minnesota rank No. 2 in the Big Ten in turnover margin, going plus-11 with 28 turnovers gained.

High point: Minnesota had not won in Lincoln, Neb., since 1960. The Gophers changed that by strolling into Memorial Stadium on Nov. 22 and toppling the No. 23 Cornhuskers, 28-24. It was the signature win of the Jerry Kill era and was the second year in a row that Minnesota had dumped Nebraska. The victory set up a winner-takes-all tilt at Wisconsin the next week with the West Division title on the line. Making the win vs. the Huskers all the more remarkable was the fact the Gophers were down double-digits in the middle of the third quarter and stud RB David Cobb was sidelined with injury. No worries. Credit QB Mitch Leidner, who threw for 135 yards and ran for a team-high 111 and two TDs.

Low point: It was a bummer to lose at Wisconsin, 34-24, in a de facto Big Ten West title game in the regular-season finale. And the 30-7 beating at TCU on Sept. 13 hurt, too. But nothing topped the unexpected 28-24 defeat at Illinois on Oct. 25. The Golden Gophers arrived in Champaign riding a four-game winning streak. Conversely, the Fighting Illini had lost three in a row and four of five. Illinois had no chance, right? Wrong. With Minnesota leading 24-21 in the fourth quarter, Gophers? RB David Cobb had the ball ripped away by Illinois LB T.J. Neal. Illini CB V?Angelo Bentley scooped up the ball and dashed 12 yards to paydirt with what proved to be the winning TD with 6:33 to play. The Gophers outgained Illinois, 411-263, but were done in by three turnovers.

Offensive MVP: RB David Cobb was excellent, running 293 times for a program record 1,545 yards and 13 TDs. The star senior was a workhorse, averaging 24.5 carries per game, and he did all of his damage despite defenses knowing the Gophers had the Big Ten's worst passing attack (131.4 ypg). Impressive.

Defensive MVP: LB Damien Wilson was a bellwether all season in the middle of a defense that ranked sixth in the Big Ten in scoring (23.4 ppg) and seventh overall (362.7 ypg). The senior is third in the Big Ten in tackles (111) and was a first-team All-Big Ten selection by the media and a second-team choice by the coaches. Also need to tip the hat to CB Brien Boddy-Calhoun and CB Eric Murray.