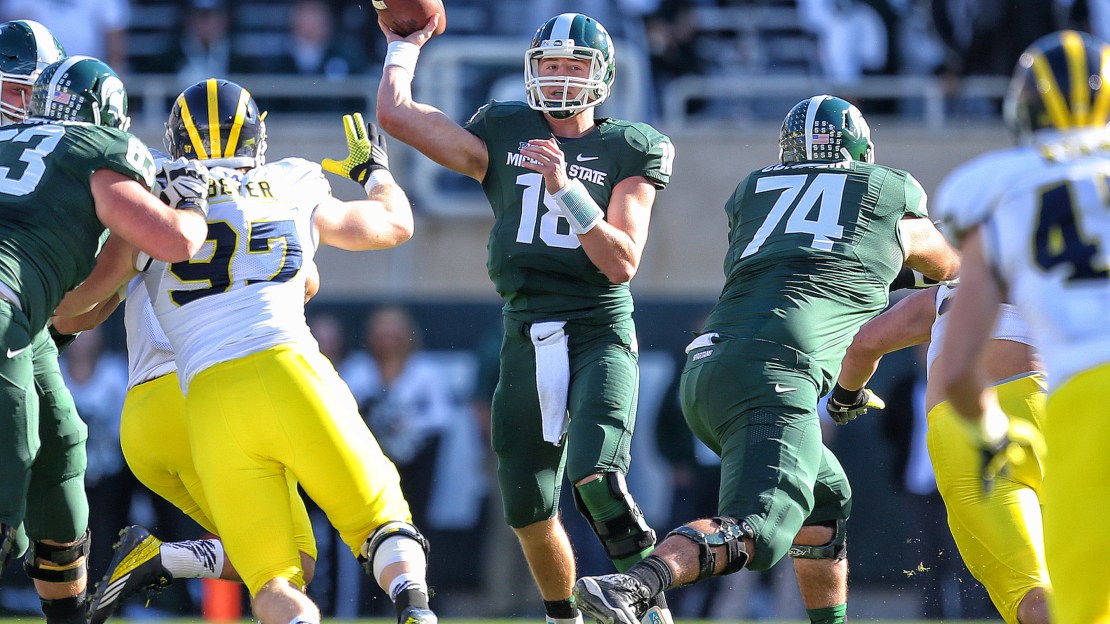 There was no league title this year. Still, Year No. 8 for Mark Dantonio was another brick in the wall of this rock-solid program, as Michigan State notched double-digit wins for the fourth time in five seasons. The Spartans are 32-8 in the Big Ten the last five seasons. Not bad.

While the ?Spartan Dawg? defense was good, this MSU team was noted more for its offense. Michigan State is No. 2 in scoring (43.1 ppg) and No. 2 overall (496.5 ypg), as the unit is led by some of the Big Ten?s best skill-position talent and a strong line.

High point: For a second season in a row, MSU dominated Michigan in East Lansing. This year, the Spartans took a 35-11 decision on Oct. 25 that pushed Michigan State?s winning streak to six after its 46-27 loss at Oregon on Sept. 6. The victory was MSU?s sixth in the last seven games vs. its hated rival and gave the Spartans some mojo with a huge visit from Ohio State on tap next. RB Jeremy Langford led the way with 177 yards rushing and three TDs, as Michigan was rationed just 186 yards (61 rushing) and had three turnovers by the Spartans.

Low point: Pundits had been pointing to Ohio State?s visit to East Lansing on Nov. 8 since the spring. This would be the ?showdown of showdowns? between the Big Ten?s best teams. Well, the No. 8 Spartans flopped, seeing their vaunted defense sliced up in a 49-37 loss that saw the No. 14 Buckeyes total 568 yards-300 through the air and 268 on the ground. The win put Ohio State in control of the Big Ten East and left Michigan State wondering ?what if??

Offensive MVP: A case can be made for RB Jeremy Langford, who ran for 1,360 yards. And how about WR Tony Lippett, who was named Big Ten Receiver of the Year after making 60 catches for a Big Ten-high 1,124 yards and 11 touchdowns? But let?s go with QB Connor Cook. The junior leads the Big Ten in passing (241.7 ypg) and is No. 2 in the conference in passing efficiency, completing 58 percent of his passes for 2,900 yards with 22 touchdowns and six interceptions. For his efforts, Cook was a consensus second-team All-Big Ten quarterback.

Defensive MVP: Some top candidates, including E Shilique Calhoun, a consensus first-team All-Big Ten selection, and CB Trae Waynes, another star who was a consensus first-team All-Big Ten pick. But this honor goes to S Kurtis Drummond, the Big Ten Defensive Back of the Year. The senior has 65 tackles and leads the Big Ten with 15 passes defended, to go along with four interceptions.