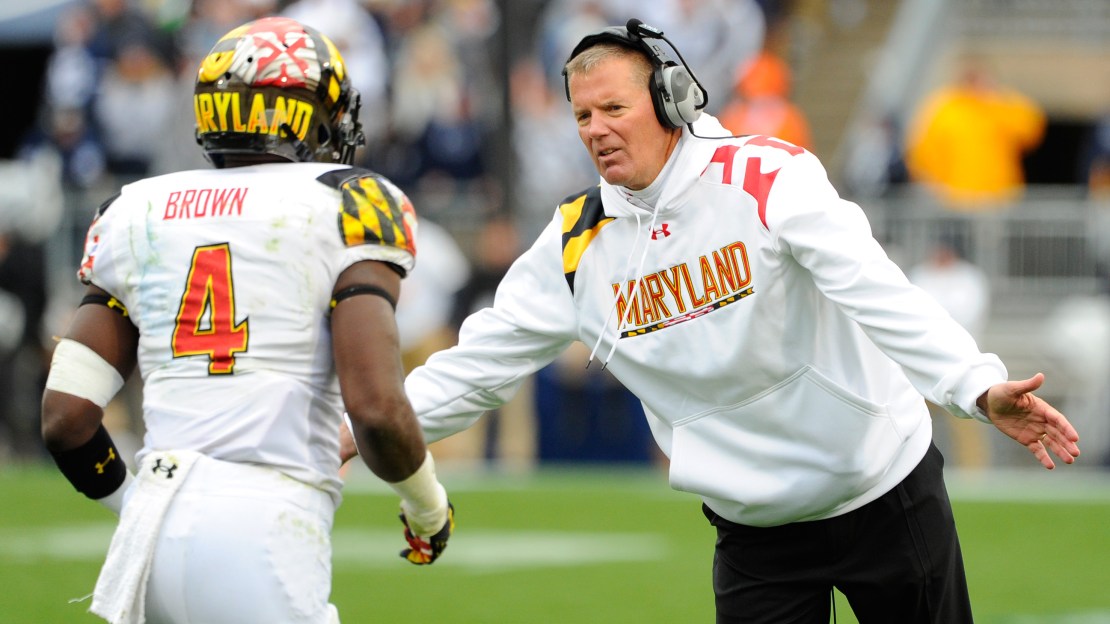 By most any measure, Maryland?s Big Ten debut was a success, as the Terps finished third in the Big Ten East and are headed to a bowl for a second season in a row.

The season was highlighted by road wins at Penn State and Michigan, in addition to a home victory vs. Iowa. But the Terrapins never could get on a roll, going on a loss-win-loss-win-loss-win-loss pattern over the last seven games after a 4-1 start.

There were some bad losses, too, as Maryland didn?t measure up vs. the Big Ten elite in defeats to Ohio State (52-24); at Wisconsin (52-7); vs. Michigan State (37-15). There also was the ugliness of the pregame coin toss at Penn State, in which the Terp captains refused to shake the hands of the Nittany Lions captains.

Still, there was plenty to cheer about in Randy Edsall?s fourth season in College Park, Md.

High point: There were a couple, with wins at Penn State (20-19) and at Michigan (23-16) ranking at the top. The victory in State College on Nov. 1 made the Terps bowl-eligible and showed they could compete with Penn State, which had a 35-1-1 all-time mark vs. Maryland before the game. The victory at Ann Arbor on Nov. 22 guaranteed Maryland at least a .500 mark in Big Ten play and gave Edsall?s club another road victory vs. a big-name program in its new league.

Low point: Maryland was primed to finish 8-4 with a season-ending visit from a struggling Rutgers squad that had lost four of five games. The Terrapins seemingly were on their way to victory, building a 35-10 second-quarter lead. Alas, the Scarlet Knights pulled off the biggest rally in school history, storming back for a 41-38 triumph vs. their fellow Big Ten newcomer. It was a heart-breaker for Maryland.

Offensive MVP: Let?s go with K Brad Craddock, who won the Groza Award as the nation?s top kicker. The junior hit 18-of-19 field-goal attempts (94.7 percent) and at one point made 24 in a row dating to last year. The Australian also made a school-record 57-yarder vs. Ohio State, one of 11 field goals from 40 yards or longer in 2014. Craddock also booted a game-winning 43-yarder at Penn State with 51 seconds left and made three field goals in the victory at Michigan. The guy was money all season.

Defensive MVP: CB William Likely was a consensus first-team All-Big Ten selection. The diminutive sophomore led the Big Ten with six interceptions, running back two for touchdowns. He also made 76 tackles and ranked third in the Big Ten in passes defended (1.17 pg). For good measure, Likely was No. 3 in the Big Ten in punt returns, averaging 11.3 yards per return with one run back for a TD.