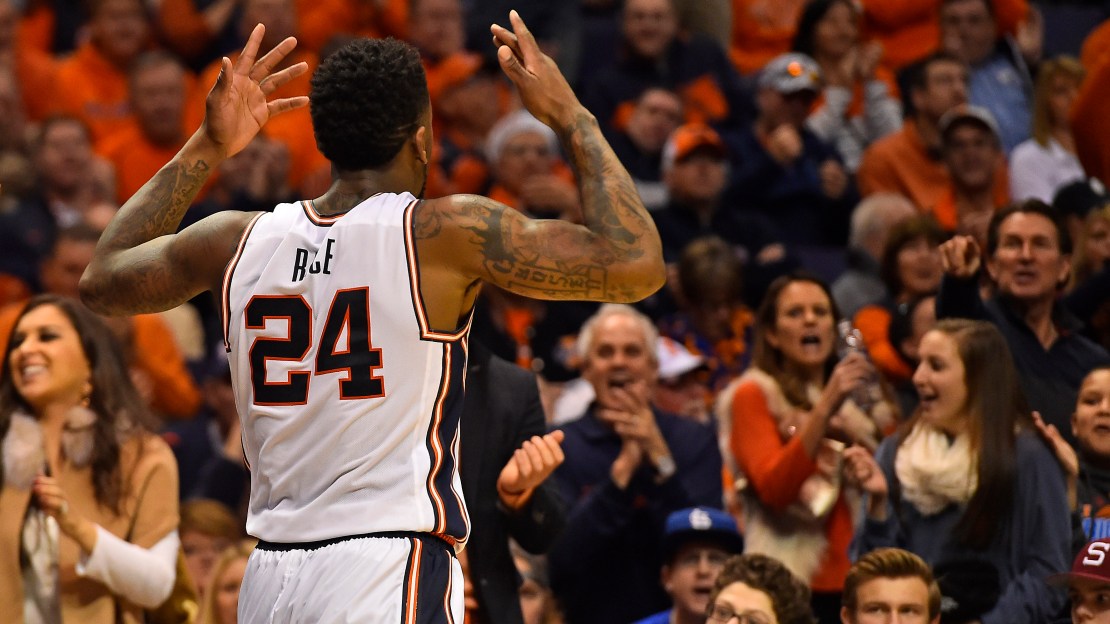 There's quite a bit of movement this week, as Illinois guard Rayvonte Rice jumps from No. 10 to No. 5 and Wisconsin forward Sam Dekker and Maryland forward Jake Layman both enter the countdown.

1. Frank Kaminsky, Wisconsin. Kaminsky and the Badgers didn?t play this past week due to finals. This gave ?The Tank? time to study, rest, play video games, ride around on his scooter, dance, and think up new nicknames for himself. The star of the sixth-ranked Badgers needs another big game Monday against a dangerous 10-1 Cal on the road.
View 2014-15 stats
Last week: 1

2. D.J. Newbill, Penn State. Newbill had another steady performance the last time out vs. Drexel, compiling 20 points and four assists to help Penn State move to 11-1, which is tied for the Big Ten's best record.
View 2014-15 stats
Last week: 2

3. Yogi Ferrell, Indiana. Ferrell became the 48th member of the historic Indiana 1,000-point club with one of the better runs of his career in the upset win over No. 23 Butler. Yogi scored 12 of his 20 points during a decisive 14-6 explosion late in the second half that helped give Indiana the lead.
View 2014-15 stats
Last week: 5

4. Terran Petteway, Nebraska. Pettaway and the Huskers are in Hawaii for the next few days, but they aren?t there to surf. The Huskers have had 10 critical days off to practice and figure out their inconsistent ways before taking on the Rainbow Warriors. Petteway is averaging 19.8 points a game.
View 2014-15 stats
Last week: 3

5. Rayvonte Rice, Illinois. Rice continues to stay in beast mode and followed up his 29-point explosion against Oregon with a 19-point masterpiece in the Braggin? Rights bru ha ha against Missouri. With the game on the line and two Tigers in his face, Rice buried a step-back three at the buzzer and cemented his name in the rivalry's storied history.
View 2014-15 stats
Last week: 10

6. James Blackmon Jr., Indiana. It was a rough shooting night for the star freshman (2-12) against No. 23 Butler, and he found himself on the bench to start the second half. Blackmon entered the game as the nation?s top freshman scorer, at 19.2 points per game, but the emergence of Troy Williams will alter Tom Crean?s strategies, and could catapult Indiana.
View 2014-15 stats
Last week: 4

7. D'Angelo Russell, Ohio State. Russell and the Buckeyes have been brilliant against unranked opponents, but North Carolina and Louisville have held both Russell and Ohio State in check. Russell leads OSU in scoring at 17.4 points per game.
View 2014-15 stats
Last week: 9

8. Sam Dekker, Wisconsin. Dekker has now put together two back-to-back 17-point performances on his bum ankle. With a week off to heal, his true test will come in Monday' showdown at Cal.
View 2014-15 stats
Last week: NR

9. Caris Levert. Michigan. LeVert continues to struggle, going 1-8 in a home loss to SMU. The Wolverines have lost four straight, and if Levert doesn?t find his scoring touch, the streak will continue.
View 2014-15 stats
Last week: 6

10. Jake Layman, Maryland. With star Dez Wells injured and freshman sensation Melo Trimble playing so well, Layman has been performing under the radar; that is, until this weekend, when he scored 21 points and pulled down 11 rebounds in a rewarding road win at Oklahoma State.
View 2014-15 stats
Last week: NR