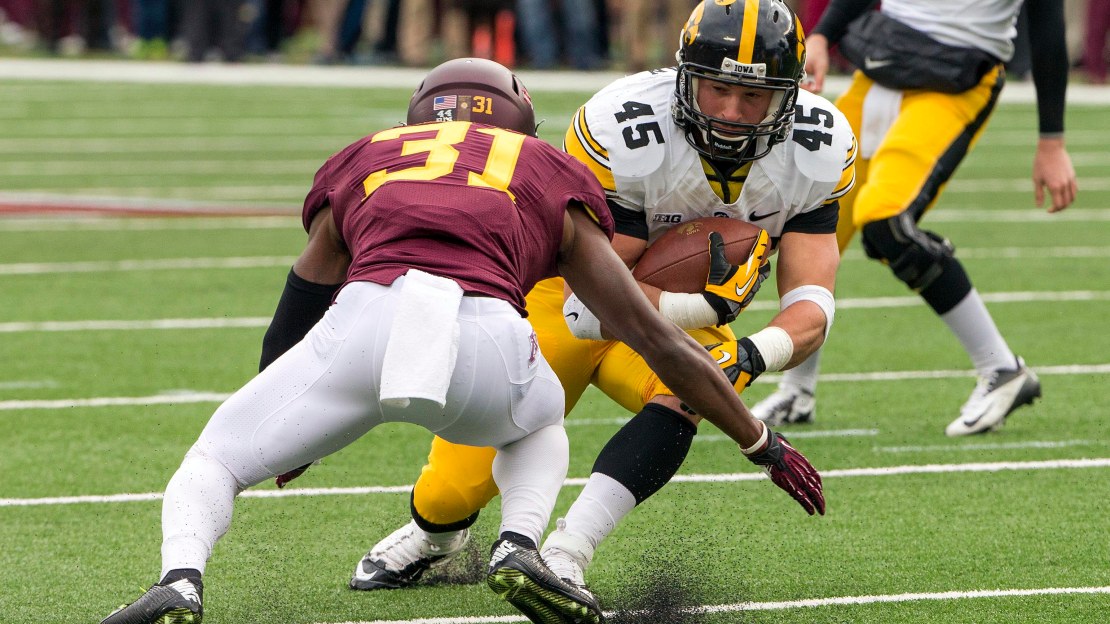 When the season dawned, Iowa looked primed to make a run at the West Division crown in Kirk Ferentz?s 16th season in Iowa City. But an inconsistent offense proved to be the undoing of the Hawkeyes.

Most felt, myself included, Iowa would be propelled by a strong rushing attack fortified by a powerful line and deep collection of running backs, but the Hawkeyes ranked only ninth in the Big Ten in rushing (156.3 ypg).

QB Jake Rudock and the Iowa passing game tried to pick up the slack, as the Hawkeyes were No. 4 in the league in passing (242.0 ypg). Still, it wasn?t enough, as Iowa finished a disappointing fourth in the West.

High point: The Hawkeyes whipped visiting Indiana, 45-29, on Oct. 11. That made Iowa 5-1 overall and 2-0 in the Big Ten. Yes, it hadn?t always been pretty along the way, as Iowa needed to rally to beat Ball State and Pitt and lost at home to Iowa State. Regardless, the Hawkeyes were looking poised to make a run at the West Division title in the second half of the season.

Low point: The West Division crown was right there for the taking for Iowa, which was 7-3 overall and 4-2 in the Big Ten with two games remaining. Win those-both at home vs. Wisconsin and Nebraska-and the Hawkeyes would go to the Big Ten title game. But Iowa first lost to No. 16 Wisconsin, 26-24, and then fell in overtime to Nebraska, 37-34, after blowing a 24-7 third-quarter lead.

Offensive MVP: The offense struggled most of the season, so finding a true skill-position standout is tough. So, let?s go with tackle Brandon Scherff. Yes, an offensive lineman. The 6-5, 320-pound senior is no ordinary lineman. Nope. He?s one of the best ever produced by Iowa. And that?s saying a lot for a program that has a long history of churning out standout blockers like Robert Gallery, Riley Reiff and Bryan Bulaga, among others of recent vintage. Scherff won the Outland Trophy in 2014 in addition to be the Big Ten Offensive Lineman of the Year.

Defensive MVP: T Carl Davis. The 6-5, 315-pound senior was a force on the interior all season, helping Iowa rank No. 6 in the Big Ten vs. the run (158.8 ypg). Davis finished with 34 tackles, nine tackles for loss and two sacks. Other Hawkeyes tallied more impressive numbers, sure, but Davis often commanded double-teams, creating room for his linemates to operate.