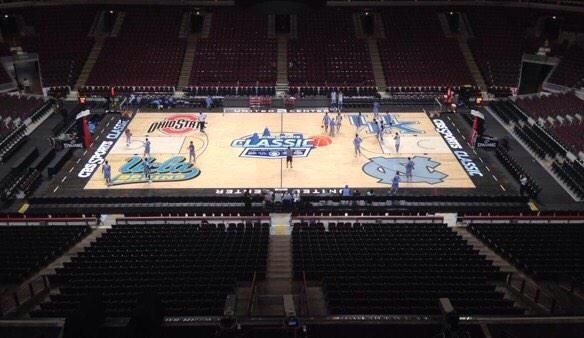 Four of the nation's top men's basketball programs are in Chicago on Saturday for the CBS Sports Classic.

The event, which pit Ohio State vs. North Carolina and Kentucky vs. UCLA, was played on a head-turning and attention-grabbing court design at the United Center.

What made the design so unique? Each team's logo – a rather large version of it – was represented on the floor, accounting for nearly all of the space outside of the key to the sideline on both sides. What's more, the second "S" in the CBS Sports Classic text under each basket extends onto the court.

Here's what the players had to say about the court:

Shannon Scott: "I liked it a lot. It didn't really affect my game at all. It was different, but I thought it was really more creative than anything."

Anthony Lee: "I thought it was cool with all the different teams they had. At first I thought it was kind of a distraction, but when we went out to practice, we got used to it. It was cool. I liked it."

Sam Thompson: "We noticed it in our shoot around and I thought it was pretty cool. During the game we didn't really notice it. We're more focused on how we play."

Amir Williams: "I honestly didn't even notice it. I was really just focused on the game."

Marcus Paige: "We practiced here yesterday and it was a little distracting at first. I'v never seen anything like that before… I thought it was pretty cool. I liked it a lot. Obviously it attracted a lot of attention."

Justin Jackson: "Walking through in practice, when we saw it, it was a little weird. It was definitely different, but once you got on the court, you didn't really notice it. Overall, I thought it was cool, but there was so much going on with all the different logos and the CBSSports stuff."

Kennedy Meeks: "I thought it was awesome. It wasn't distracting. I thought the idea of doing something like that was pretty cool. I had no idea. I thought we would just be playing on a regular looking court."

The Twitter reaction wasn't so kind. Check out some of the complaints.

As a critic of court design, can say that floor for CBS Classic has surpassed Oregon's nightmare as worst ever.

This is beyond an eyesore: pic.twitter.com/D3pnnWwAsW

I?d like to have words with whoever decided on the CBS Sports Classic court design

That court for Ohio State is beyond awful. How do you screw that up that badly?

This court would make a lot more sense for, you know, the Final Four. Even then, way too big of an eyesore.

The additional giant school logos aren't the only court anomaly today…@CBSSports baseline logo actually crosses over onto the court!

Ohio State not looking good against UNC. OSU front court getting exposed. Also, those awful hardwood decals are not helping the situation.

Sorry guys… Its going to be hard to tweet because this court is impairing our view of the game. #GoBucks

How good has Kentucky been so far? Almost good enough to forget about how ugly this court is. Almost.