Illinois season review: Illini get back to bowl in Tim Beckman's third season 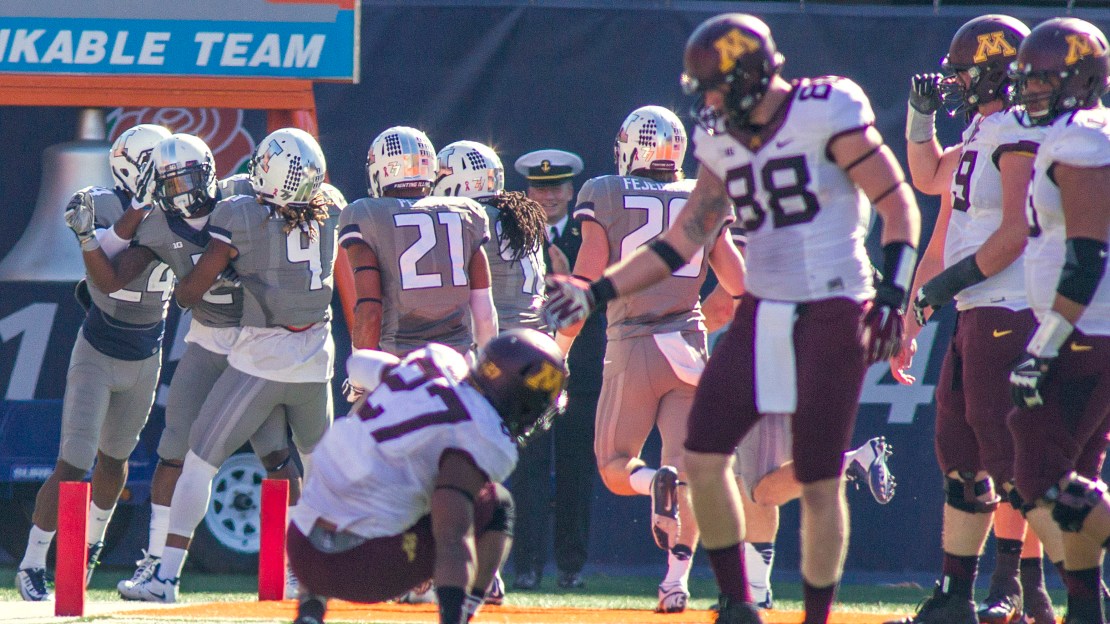 As he entered his third season in Champaign, Tim Beckman was still looking for his first bowl bid. He was 6-18 overall and 1-15 in the Big Ten when 2014 dawned. Could Beckman turn the worm in Year Three? Yep.

Things looked iffy for a while, as the Fighting Illini opened 3-1 and then lost three in a row. With its back against the wall with a 4-6 record and needing to win its final two games to reach bowl eligibility, Illinois delivered. The Illini knocked off Penn State, 16-14, and then won in Evanston vs. Northwestern, 47-33, for the first time since 2002 to earn the program?s first bowl since 2011. Like Illinois, NU needed to win to reach a bowl.

The defense floundered almost all season, but the offense often rose to the occasion even with sophomore QB Wes Lunt first being lost for three games with a broken leg and then getting benched the last game-and-a-half for ineffectiveness. Senior QB Reilly O?Toole came on and guided Illinois when the chips were down to essentially save the season and reach a bowl many didn?t think was possible.

High point: A 28-24 win vs. Minnesota on Oct. 25 halted a three-game losing skid and sparked a strong finish to a season that saw the Fighting Illini win three of their last five games to become bowl eligible. This was a hot Golden Gophers? squad that was riding a four-game winning streak coming to Champaign. Illinois blew a 21-10 third quarter lead and fell behind, 24-21. But in the fourth quarter, Illini LB T.J. Neal ripped the ball from Minnesota RB David Cobb. Illinois CB V?Angelo Bentley scooped up the fumble and raced 12 yards for what proved to be the winning touchdown. It may have been the play that saved the season-and Beckman?s job.

Low point: A 30-14 home loss to Iowa on Nov. 15 followed a 55-14 demolition at Ohio State that was Illinois? second defeat in a row and left the Fighting Illini 4-6, one loss from being eliminated from bowl consideration. Could this team win its last two games to reach the postseason? Things didn?t look good with games left vs. Penn State and at Northwestern.

Offensive MVP: It may have been G Ted Karras. But let?s go with WR Mike Dudek. The true freshman was an unheralded three-star recruit who stood 5-11 and weighed 176 pounds. No matter, Dudek played with toughness and savvy. His 69 catches were the second most in the Big Ten, going for 965 yards with six touchdowns. This kid already is special, a true overachiever who maxes out his abilities. Dudek may end up leaving campus as an all-time great.

Defensive MVP: Look, this isn?t a good defense. Illinois ranks last in the Big Ten in total defense (464.3 ypg) and last in scoring defense (33.9 ppg). But there are some special players. CB V?Angelo Bentley had a good season. But let?s go with LB Mason Monheim, who like Bentley was a consensus honorable-mention All-Big Ten player. Monheim ranks fifth in the Big Ten in tackles with 108. The 6-1, 235-pound junior led the Big Ten in forced fumbles with four, while showing leadership skills.