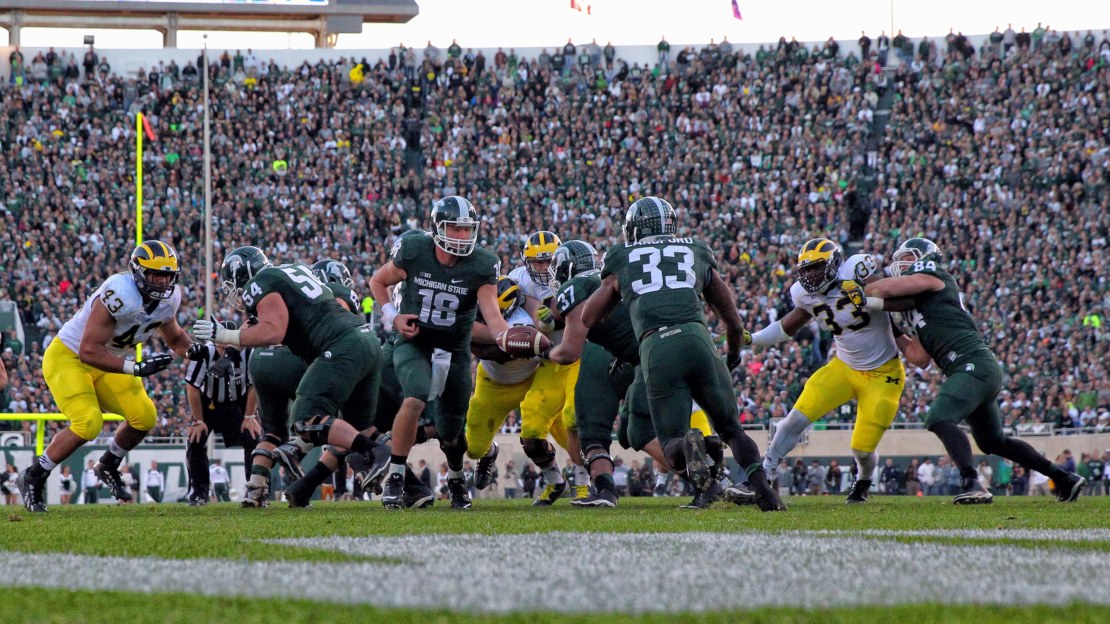 ILLINOIS
Receiver Mikey Dudek. Freshman should go over 1,000 yards for the season in Dallas and is on his way to becoming the school's career leader in receptions and yards. A huge surprise for most, but not the coaches. They knew early he was better than his high school rankings.

INDIANA
Tevin Coleman. If not for Coleman and his 2,000 rushing yards - one of 18 players in FBS history to reach that elusive number - Indiana?s 4-8 record would have been even worse.

IOWA
When offensive tackle Brandon Scherff shunned NFL first-round possibilities and returned for his senior season, he kind of saved the day for Iowa?s O-line. Without Scherff, the Hawkeyes would?ve needed to find two new starters at tackle to go along with what turned out to be unsteadiness on the interior of the OL. Scherff had arthroscopic knee surgery the Monday before the Iowa State game, but returned to play that Saturday. He?s an Outland Trophy finalist and was named the Big Ten?s offensive lineman of the year.

MARYLAND
Cornerback Will Likely, who led the Big Ten in interceptions (6). He returned two picks for scores and also added a punt return TD.

MICHIGAN STATE
Jeremy Langford. Tony Lippett, Trae Waynes, Jack Conklin and Connor Cook all deserve mentions, but Langford was a consistent force who got better as games — and the season — got later.

NEBRASKA
Even though this wasn?t the senior year Ameer Abdullah wanted, he still finished with 1,523 total yards and 18 touchdowns, and was a finalist for the Doak Walker Award. A knee injury he suffered against Purdue prevented him from having a November to remember.

NORTHWESTERN
Freshman or not, Justin Jackson had a phenomenal season. He rushed for 1,187 yards and 10 touchdowns behind a so-so line, torching the Irish for 149.

OHIO STATE
It's Joey Bosa, the sophomore All-American defensive end who led the Big Ten in sacks (13.5) and tackles for loss (17) without Noah Spence, suspended all season, taking pressure off him on the other side. The Buckeyes found ways to replace Spence and replace Barrett, but they couldn't have replaced Bosa.

PENN STATE
LB Mike Hull. Penn State's senior leader moved into the middle this year and was everywhere the Lions needed him to be, playing sideline to sideline and recording 134 tackles, 10.5 tackles for loss, two sacks and an interception.

PURDUE
Akeem Hunt. The senior running back was Purdue?s most electrifying player and the biggest threat on offense. His final game ended on a sour note - losing to Indiana and leaving early with a concussion. But Hunt singlehandedly kept Purdue in the game, rushing for 171 yards.

RUTGERS
Gary Nova wasn't even the definitive starter when training camp opened but he emerged as one of the best in the Big Ten under the tutelage of first-year offensive coordinator Ralph Friedgen, who taught the stubborn senior to maximize his talent by taking fewer risks and making better decisions. Rutgers wouldn't have beaten Michigan or Maryland without Nova.

WISCONSIN
Was there any doubt? Melvin Gordon is not only the heart and soul of this Wisconsin team, he's its leader and easily the most productive player. With 2,487 total yards, Gordon has accounted for just over 41 percent of the offense from the running back position. His 2,336 rushing yards is currently the fourth best total in FBS history. Leaving after this season, he may not have all the records that Ron Dayne and Montee Ball do, but he's right in the conversation as the best running back in program history.