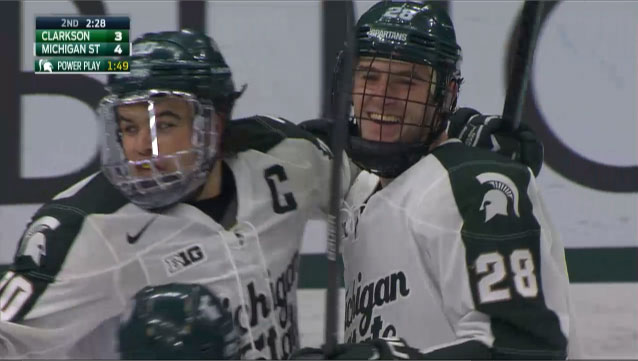 College hockey dies down this weekend for the holidays, so let?s jump ahead to the 50th annual Great Lakes Invitational, taking place at Joe Louis Arena in Detroit on Dec. 28-29.

Michigan vs. No. 5 Michigan Tech
When: Sunday 3:30p.m. ET, December 28th
How to watch: Sunday?s game airs live on BTN2Go or Fox Sports Detroit
Players to watch: Freshman forward Dylan Larkin scored the lone goal in Michigan?s 5-1 loss to Boston College last Friday. He has 15 points on the season. Netminder Zach Nagelvoort had 24 saves on the night against BC. He boasts a .904 save percentage on the season.
The latest on the Wolverines: Michigan?s four-game win streak was snapped in a downfall against Boston College last weekend. After going down early with a 3-0 deficit in the first period, the Wolverines were never able to recover. In its last meeting, Michigan fell big to Michigan Tech in late October, losing 4-1 and 6-2 in that series.
The latest on the Huskies: Michigan Tech boasts a 13-3 record and is undefeated on the road. Senior Forward Tanner Kero is a player that caused some damage against the Wolverines in their last meeting. He has 18 points on the season.
In Summary: The Wolverines are sure to come out hungry and play with a chip on their shoulder, but the question remains: will their fight be enough to counter the talent of a Michigan Tech team that is 8-0 on the road?

Michigan State vs. Ferris State
When: Sunday 7 p.m. ET, December 28th
How to watch: Sunday?s game airs live on BTN2Go or Fox Sports Detroit
Players to watch: Joe Cox, Thomas Ebbing and Ryan Keller all notched their first goals of the season on Sunday against Clarkson. They also earned first, second and third stars of the week, respectively. Cox scored two goals in a 1:51 stretch and notched an assist against Clarkson. All three are local Michigan natives.
The latest on the Spartans: Michigan State now has a 6-9-1 record overall, and it seems to be hitting its stride offensively after a solid two weekends of play. They earned a shootout win against Minnesota two weekends ago and earned a high-scoring comeback win against Clarkson, 6-4 on Sunday. The Spartans exploded with a four-goal second period. MSU split with Ferris State in their last meeting in late October.
The latest on the Bulldogs: Ferris State features sophomore forward Chad McDonald, who?s its leading goal scorer (8). Also keep a look out for junior forward Matt Robertson, who leads the team with 13 assists and 17 points. The Bulldogs beat Michigan early on and most recently tied and lost to Wisconsin.
In Summary: It will be close to a home game for the Spartans that feature a roster of many local Michigan kids, but their offensive strides will be tested against a competitive Ferris State team.

GLI Notes
If MSU and Michigan both win, they will face off at 7 p.m. ET Monday, December 29. If either loses, they will take on the corresponding losing opponent at 3:30 p.m. ET Monday. All series will air live on BTN2Go or Fox Sports Detroit.

Let's take a look back at last week's action, too.

Michigan and Michigan State both took part in non-conference action. The Wolverines fell at No. 15 Boston College, 5-1, last Friday and MSU took down Clarkson, 6-4 last Sunday at home.

The Spartans were honored with all three stars of the week this week, after three players (Cox, Ebbing, and Keller) notched their first goals of the season against Clarkson. This is the first time that all players from the same school claimed the first, second and third stars spots in the same week.

In other conference news, Penn State broke into the top 20 rankings in the USCHO.com poll this week at No. 20. Minnesota dropped down one spot to No. 8.