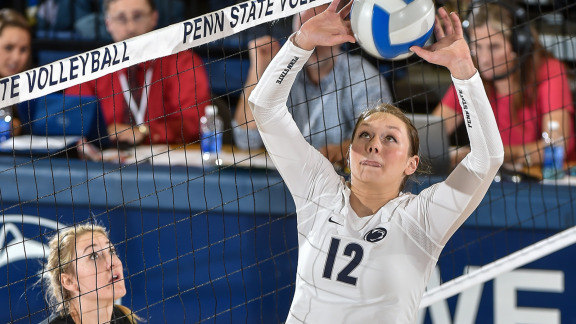 After 16 weeks of volleyball, we arrive at our destination: Oklahoma City. The national semifinals begin Thursday, and the Big Ten?s dynasty, Penn State, is the only remaining conference team in the tournament.

Illinois, Nebraska, Ohio State and Wisconsin all lost last weekend in regional action. See my recap of those matches.

Let's take a look at the national semifinal matchup:

For the seventh time in the last eight years, Penn State is playing on the final weekend of the season. The Nittany Lions have finished five of those seven years with national titles and are seeking an NCAA record seventh title overall. The Big Ten?s top program reached this point by beating Wisconsin in four sets in Louisville on Saturday.

The Badgers were hobbled by an ankle injury to setter Lauren Carlini but were still a formidable foe for the Nittany Lions to dispatch. After dropping the first set, due in large part to eight attack errors, Penn State came back thanks to the play of Aiyana Whitney and Haleigh Washington, as well as the boost off the bench from freshman Simone Lee. Lee had seven kills in the second set alone, replacing Ali Frantti and finishing the match with 12 kills, the same number she had against Wisconsin on Sept. 24.

The turning point of the match came in set three when, with the Badgers leading 21-20 and attempting to take a 2-1 lead, Penn State All-American Micha Hancock took over. Hancock would tie the set with a swing of her own before serving the next three points, which included two aces, that gave the Nittany Lions a 24-21 lead. Much like the national championship a year ago, when Hancock served a four-point run against Wisconsin in the fourth set with her team down 23-21, the Big Ten?s all-time leader in service aces dictated a run from the back line. With 124 aces this season, Hancock owns the NCAA single-season rally scoring era record for aces and continues to show how she can change matches with her top-spin jump serve.

The win over the Badgers sets up Penn State for another matchup with its long time tournament rival Stanford. A year ago in Lexington, the Nittany Lions and the Cardinal played what has in retrospect been considered by many to be the national championship match in a regional final. In a match that may not have an equal over the past two seasons, Penn State fell behind by losing the first set, then won sets two and three before losing the fourth and playing a decisive fifth set with the Cardinal. Stanford would jump out to a 9-6 lead in fifth and had the Nittany Lions on the ropes before a Russ Rose timeout. Penn State would go on a 9-2 run to close the match and spoil the Cardinal?s hopes to return to the Final Four for the first time since 2008.

Stanford has not forgotten that match. That sentiment is typically used as hyperbole to build up a showdown, but the interviews following the Cardinal?s win over Florida showed it is much more than build up. Head coach John Dunning and his players talked about how they have been thinking about that match ever since and hoping for a rematch to avenge what was a devastating loss. The Cardinal will get their chance on Thursday, and volleyball fans will see the two most decorated programs in the sport vie for a title match appearance.

The only two teams to appear in every NCAA tournament did meet earlier this season, but the stakes were not nearly as high as they will be in Oklahoma City. September?s match in Maples Pavilion was also decided in five sets and, despite the lineup being different for Penn State, the Nittany Lions nearly pulled off the road win.

Frantti had 22 kills and 11 digs and Megan Courtney had 18 kills for Penn State, but the trio of Inky Ajanaku, Morgan Boukather and Jordan Burgess each was in double-figures in kills to lead the Cardinal to the win. Stanford has also seen a lineup change since that match, with the addition of 6?8? redshirt freshman Merete Lutz to the middle providing a boost to an already exceptional team. It?s important to note the blocking numbers from that initial meeting, as Stanford out-blocked Penn State 10-8 in the Big Ten/Pac-12 Challenge and blocking will play a big part in Thursday?s matchup.

Russ Rose has admitted throughout the season that blocking has not been one of the Nittany Lions strengths and while it has improved over the course of the year, Penn State will have a tough time beating Stanford without a solid performance on the block. Several times against Wisconsin on Saturday, the Penn State block was used by the Badger hitters and the inexperience at the net has hurt the Nittany Lions.

Unforced errors will also be a concern for Penn State. The defending champions have had the highest hitting percentage in the nation this season but outsides like Whitney, Frantti and Lee have been prone to bad errors at times. In prior championship seasons for Penn State, the team has had an outside who terminates with great efficiency. One will need to step up for the Nittany Lions to get past the Cardinal.

There are numerous compelling storylines for Thursday?s showdown. Two teams vying to become the NCAA leader in total championships, legendary coaches facing off, revenge on the mind of the Cardinal, but the return of Micha Hancock to her home state of Oklahoma to finish out her career stands out above the rest. Hancock has been one of the faces of collegiate volleyball over the past two years and she will have a chance to end her career with a title in front of her hometown fans. Stanford?s Ajanaku will also be playing in her home state, but playing in Oklahoma City likely has more meaning to Hancock as she will be just 15 minutes from where she grew up. If Penn State can close out its sixth title in eight years, and second for Hancock, you could not draw up a better scene for the final moments of the 2014 season.