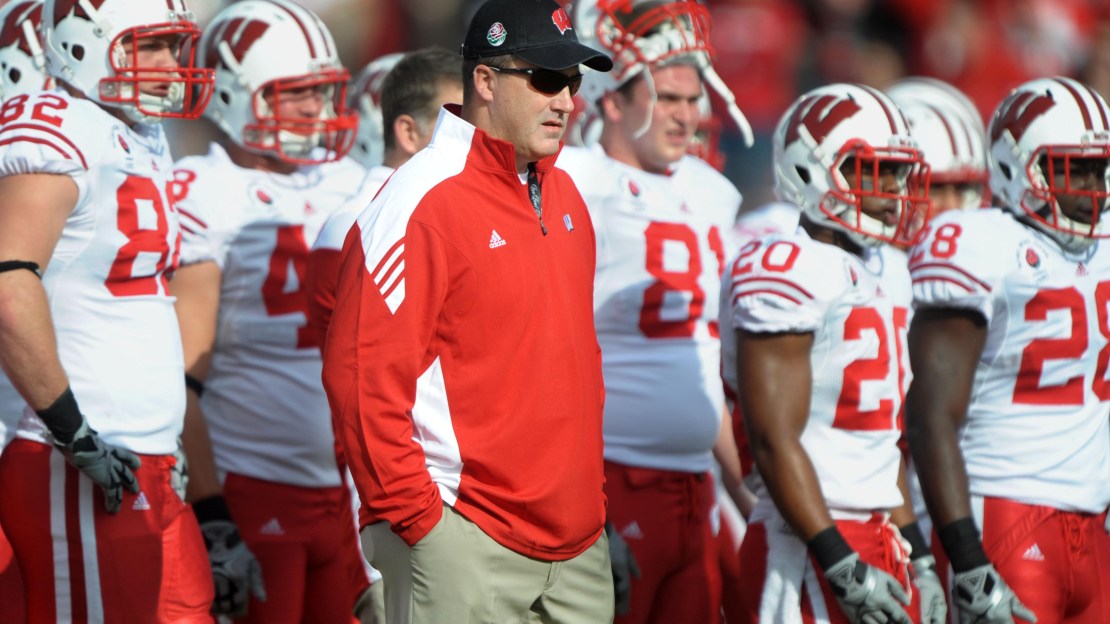 What had been speculated for days became official on Wednesday with the Wisconsin Badgers hiring Paul Chryst as their head football coach.

Chryst will be the Badgers? third head coach since the 2012 season. It?s hoped his arrival will steady a program that has been rocked by not one, but two, sudden and abrupt coaching departures.

Chryst is a familiar face for Wisconsin athletic director Barry Alvarez, who probably wanted to hire someone he knew and someone who understood the program after getting burned by hiring an outsider in Gary Andersen, who has deep roots out west and who shockingly departed for the Oregon State job last week after just two scant years at Wisconsin. That came on the heels of Bret Bielema stunningly bolting for Arkansas.

Chryst, 49, was born for this job. In fact, some say Alvarez wanted to tab Chryst for the position when Bielema left in 2012. But Chryst had been on the job at Pitt just a year at that time. Was he ready? And would it have been fair to Pitt to poach its coach so quickly?

Two years later, Chryst is back home. The Madison native has a laid-back personality, lacks ego and abhors the spotlight. The guy just loves to coach. He played quarterback for the Badgers from 1986-88 and was an assistant for Wisconsin on two occasions. His first stint in Madison was in 2002 as tight ends coach under Alvarez. Chryst returned in 2005 to serve as offensive coordinator until 2011 before landing the head coaching job at Pitt.

Chryst always has been a man in demand, advancing quickly up the ranks and often being a hot commodity. He worked in the NFL as a tight ends coach for the San Diego Chargers (1999-2001) and as offensive coordinator for Wisconsin-Platteville (1993), Illinois State (1995) and Oregon State twice (1997-1998 and 2003-04) under Mike Riley, who recently took the Nebraska job. Chryst even has coached in the CFL.

Chryst reportedly was wooed by the Dallas Cowboys to be their offensive coordinator late in his Wisconsin tenure. He also supposedly was a target for the head coaching job at Minnesota before Tim Brewster was hired in 2007 and at Purdue before Danny Hope was hired as head-coach-in-waiting in 2008.

Chryst eventually left Wisconsin, landing the head coaching job at Pitt in 2012. But he didn?t have great success in the Steel City, going 19-19 overall and 10-13 in league play with three bowl bids for a program often in coaching tumult. Dave Wannstedt, Mike Haywood and Todd Graham all were hired or coached full-time for the Panthers since 2010 before Chryst arrived. Now, Pitt is back to the drawing board.

It will be interesting to see who is on Chryst?s staff, with speculation already percolating.

It is believed that Chryst will bring Joe Rudolph and Matt House with him from Pitt. Rudolph is a former Badger offensive lineman and assistant from 2008-11. House is a Michigan State grad who is the defensive coordinator at Pitt.

Chryst also could try to woo Bob Bostad from the Tennessee Titans, where the Wisconsin native is offensive line coach. Bostad was on the Wisconsin staff from 2006-11 working with tight ends and the offensive line while also being the run-game coordinator. And keep an eye on Bart Miller, who coached the Wisconsin o-line in 2012. He?s at Florida Atlantic working for ex-Badger assistant Charlie Partridge.

And will Chryst keep any current Wisconsin staffers? It?s thought defensive coordinator Dave Aranda may stay. Others also may want to remain in Madison, including special teams/tight ends coach Jeff Genyk and wideouts coach Chris Beatty, among others.

Whoever is on the staff, know this: Chryst?s fingerprints will be all over the offense. He pushed the buttons on some good attacks in Madison, first under Alvarez (2005) and then under Bielema (2006-11), helping the program reach the Rose Bowl after the 2010 and 2011 seasons.

Chryst?s 2005 attack may have been his best in Madison, as it established school single-season standards for scoring average (34.3 ppg) and points (446), as the Badgers tallied at least 40 points six times that season. Chryst?s offense kept motoring the next season in helping Wisconsin finish 12-1 in Bielema?s debut.

Chryst will inherit a program that is clicking on all cylinders. Bielema led Wisconsin to three consecutive Rose Bowl bids from 2010-12. Andersen took Wisconsin to the Big Ten West title this season before losing 59-0 to Ohio State. The Badgers subsequently earned a bid to the Outback Bowl to play Auburn, a game in which Alvarez will coach.

On offense in 2015, Chryst will work with quarterbacks Joel Stave and Tanner McEvoy. Corey Clement looks primed to be the school?s next great back with Melvin Gordon off a year early to the NFL. The defense will welcome back over half of its starters. There's a lot of talent to work with.

What?s it mean? Chryst?s first team may be primed to repeat as West Division champions.