Indiana season review: Plenty of highs and lows for the Hoosiers 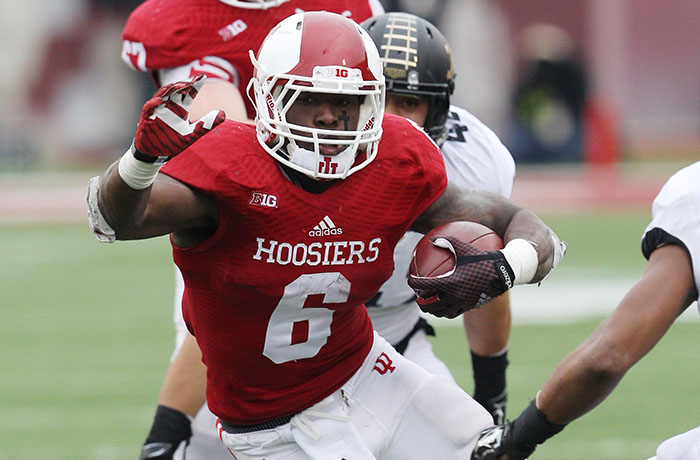 Many felt this could have been a breakthrough season of sorts for Indiana coach Kevin Wilson, who was in his fourth campaign in Bloomington. But attrition and injury at quarterback-along with yet more poor play on defense-prevented the Hoosiers from earning the program?s first bowl since 2007 and just its second since 1993.

Still, you get the feeling Wilson has this program pointed on an upward trajectory, as IU was able to end the season with a win over Purdue to give the Hoosiers the Old Oaken Bucket for a second season in a row. That hasn?t happened for Indiana since 1993-94. Hey, it?s a nice building block for the offseason.

There were highs (a win at No. 18 Missouri) and lows (a loss at Bowling Green) in a season filled with ?what could have been? for Wilson, who is 14-34 overall at Indiana and 6-26 in the Big Ten.

High point: Indiana was fresh off a dispiriting 45-42 loss at Bowling Green, making IU 1-1 as it trekked to Columbia, Mo., on Sept. 20 to play the No. 18 Missouri Tigers, who were the defending SEC East champs. This didn?t look good. Alas, the Hoosiers stunned the nation with a 31-27 win. Indiana used a balanced attack (252 yards rushing; 241 yards passing) to pull off the stunner, with RB D?Angelo Roberts scoring the winning touchdown with 22 seconds hanging on the clock.

Low point: Indiana was 3-2, still dreaming big when it went to Iowa on Oct. 11. But not only did the Hoosiers fall to the Hawkeyes, 45-29, but QB Nate Sudfeld suffered a season-ending shoulder injury. The Hoosiers already had seen QB Tre Roberson transfer to FCS Illinois State in the summer. In the end, Indiana was forced to play true freshman Zander Diamont, who was more noteworthy for this Hollywood family than his fat high school scrapbook. Bottom line: Diamont was ill-equipped to play. The Hoosiers subsequently lost their next five games before ending a six-game losing skid in the finale vs. Purdue.

Offensive MVP: A no-brainer, with RB Tevin Coleman enjoying one of the best seasons in college football history. The junior finished second in the nation in rushing with 2,036 yards, averaging 7.5 yards per tote. Coleman was at his best at Rutgers on November 15, running for 307 yards. He finished seventh in the Heisman voting.

Defensive MVP: The Hoosier defense has a history of struggling-and 2014 was another chapter in that book. Indiana was 13th in the Big Ten in scoring defense (32.8 ppg) and 11th in total defense (433.3 ypg). Still, there were some standouts, headlined by S Antonio Allen. He led the team with 74 tackles. The sophomore is a big hitter who has a nose for the ball. Allen should thrive in the future for a unit that teems with young talent and potential.