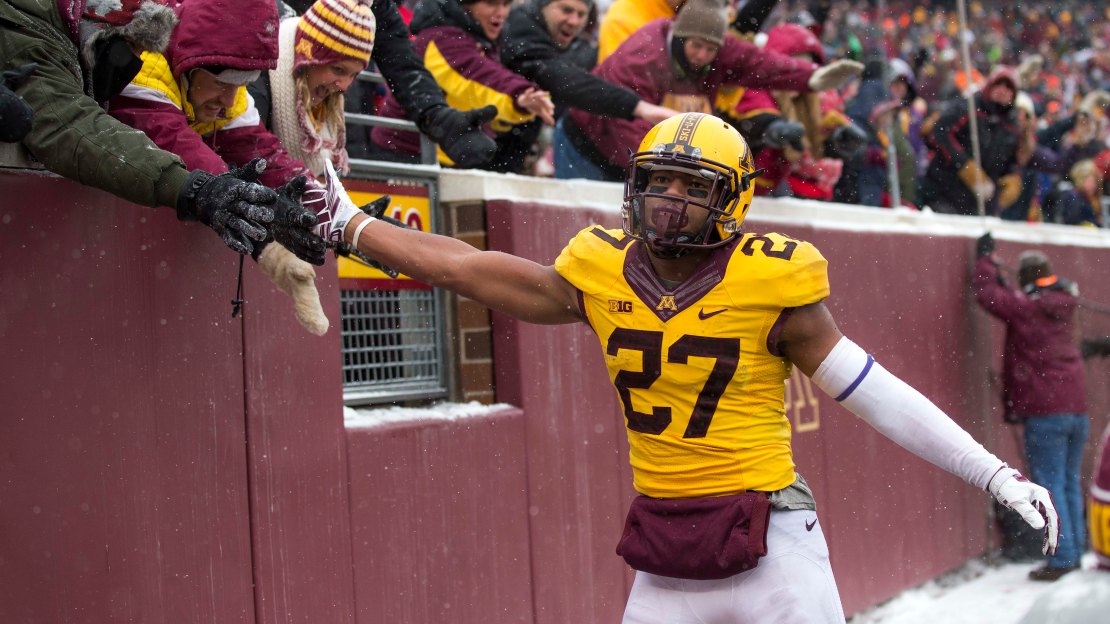 No matter who is head coach of Michigan in 2015, the quarterback spot will be the biggest issue. As Nick Baumgardner of Mlive.com points out, the position was the ultimate undoing of Brady Hoke.

If Michigan opts for a spread-favored coach, obviously things would get a bit more difficult, as Baumgardner notes. But Shane Morris does have the athleticism and speed to at least fake his way through a spread system for a while. Wilton Speight? Mobility isn't his strength, so that might be a bit more difficult. Alex Malzone will be on campus either way in January, regardless of who the coach is, but he's going to have a lot of catching up to do. Expecting a true freshman to start right away is obviously less than ideal, and if Michigan's running some sort of spread look, it would probably be even more difficult for Malzone.

Speaking of the Wolverines ? Check out the T-shirts that NJIT is selling in the wake of its huge upset win at Michigan.

Griffith thinks that if Pitt coach Paul Chryst does land at Wisconsin, MSU defensive coordinator Pat Narduzzi could be a top target for the Pitt job. Makes sense. I could see it. Also: sounds like MSU fans aren?t gobbling up tickets to the game. BU fans are.

On the topic of ticket sales, Minnesota fans are snapping up Citrus Bowl ducats.

Hey, it?s the school?s first New Year?s Day bowl since ? 1962!!!! The Gophers had sold 6,600 tickets for the Citrus Bowl as of Friday afternoon, according to Senior Associate AD Chris Werle. That's more than the Gophers sold to their past two bowl games combined (6,538).

Here you go: Pitt coach Paul Chryst has confirmed talking to Wisconsin for the first time. This charade should end soon, with Chryst likely being named head coach of the Badgers perhaps as soon as Thursday evening.

In their time, the coaches at Ohio State and Michigan knew they had to go through each other to get what they wanted, which was a Big Ten title, but often also a chance to prove the Buckeyes or Wolverines were as good as any team in the country. Now, the coaches at Ohio State and Alabama are faced with the same thing when it comes to chasing a national title. You see the symmetry?

No. 1 is quarterback Hayden Rettig, the LSU transfer who will battle Chris Laviano for the job in the spring with Gary Nova gone. Rettig has a big-time arm. How will OC Ralph Friedgen mold these guys?

Sam McKewon of Omaha.com has a nice look back on the 2014 season for Nebraska. MVPs, best plays, best call etc. Also a look at some key stats.

Best team performance? The win vs. Northwestern. The worst? The loss at Wisconsin. Sounds about right.

Iowa?s loss to Iowa State showed some confidence issues for the Hawkeyes. Not good.

Iowa State was missing two of its top players - suspended-for-one-game guard Bryce Dejean-Jones and big-man transfer Jameel McKay, who gains eligibility Dec. 20. If a short-handed Iowa State team can manhandle the Hawkeyes like this, what does that mean for the Big Ten Conference season, HawkCentral.com wonders?

"It's just disappointing, because I know we're better than that," Aaron White said. "It's just frustrating and unacceptable, to be honest."

How about Pat Chambers? Penn State squad? This may be an mid-level Big Ten team headed for an NCAA bid.

David Jones of Pennlive.com was encouraged and impressed by a recent win over George Washington. Realistically, that gives PSU a chance to be in the NCAA tournament conversation with an 8-10 conference mark. In Chambers' fourth season, that is something of a breakthrough. The Lions' last NCAA appearance was four seasons ago when they went 9-9 in league play, then unexpectedly swept to the Big Ten tournament final in all-conference guard Talor Battle's final season. Keep this team on your radar, people.