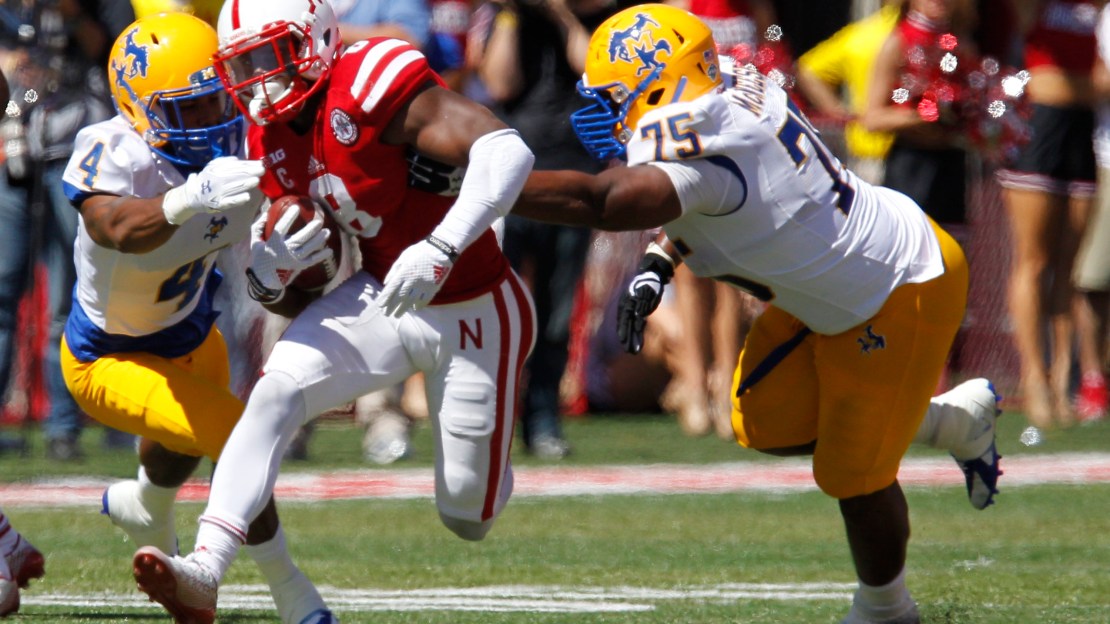 Today, it's time for Part II, the top play/moment for all 14 teams.

ILLINOIS
V'Angelo Bentley's scoop and score against the Gophers. Until that play, it looked like another loss for the Illini. That might have saved Tim Beckman's job.

INDIANA
Instead of listing the numerous highlights Tevin Coleman engineered, I?ll leave it at the run against Purdue pushing him over 2,000 rushing yards.

IOWA
Iowa?s win at Pittsburgh is the lone game this season where you could definitely argue that the Hawkeyes exceeded expectations. It was the Hawkeyes first road win after trailing by 10 or more points in the second half during the Kirk Ferentz era, a span of 16 seasons. Backup QB C.J. Beathard replaced injured starter Jake Rudock in the second half and led Iowa on three scoring drives. Sophomore safety Anthony Gair intercepted a pass to end the game.

MARYLAND
Randy Edsall tossing his headset into the air after Maryland won at Michigan.

MICHIGAN
In the first half of the first game against Appalachian State, Michigan scored three passing touchdowns from Devin Gardner to Devin Funchess. The halftime score was 35-0, the two stars were shining and the season looked like a dream.

MICHIGAN STATE
RJ Williamson's pick six against Michigan. It capped a significant comeback from early struggles for the junior safety, and essentially clinched a sixth win in seven games for the Spartans over the Wolverines.

MINNESOTA
Cornerback Briean Boddy-Calhoun stripping the ball from De'Mornay Pierson-El near the goal line that sealed the 28-24 win at Nebraska.

NEBRASKA
Abdullah?s 58-yard TD to beat McNeese State. These were the type of plays you expected to see from Ameer Abdullah in his senior campaign. On a day where Nebraska was out of rhythm and playing without Kenny Bell or Randy Gregory, Abdullah took the team on his back and found a way to win the game off a simple check down pass from Tommy Armstrong.

NORTHWESTERN
Jack Mitchell hadn?t made anything longer than 29 yards until strolling into Notre Dame Stadium on Nov. 15. He tied the game with a 45-yard field goal and won it by nailing one from 41.

OHIO STATE
J.T Barrett's 25-yard scramble for a touchdown with seven seconds left in the first half against Michigan. If he doesn't score there, the Buckeyes go to halftime trailing. Instead, Ohio State went to the locker room tied, with momentum, after getting out-played for the first 30 minutes and were on a path toward victory even after Barrett broke his ankle in the fourth quarter.

PENN STATE
Penn State's game-winning drive in the opener against UCF. Playing in Dublin, Ireland, Hackenberg orchestrated a seven-play drive that included an eight-yard run on fourth down. Kicker Sam Ficken nailed the 36-yarder as time expired to give James Franklin his first Penn State victory.

PURDUE
The win at Illinois. Austin Appleby, in his first career start, has an outstanding performance in Hazell?s first Big Ten victory and win away from Ross-Ade Stadium. It was clearly the high point of the season.

RUTGERS
Rutgers trailed Maryland by 25 points in the second quarter of the regular-season finale and couldn't make a simple tackle as it headed toward a fifth blowout loss. Everything changed with a late first-half touchdown drive. Nova got hot and the defense only surrendered three second-half points and made a huge fourth-quarter fourth-down stand to allow for the biggest comeback in school history.

WISCONSIN
Melvin Gordon's 408-yard rushing performance against Nebraska. Those three quarters were something else. It seemed like every time he touched the ball, he was bound for the end zone. With the snow coming down at night, it was a tremendous atmosphere inside Camp Randall Stadium.