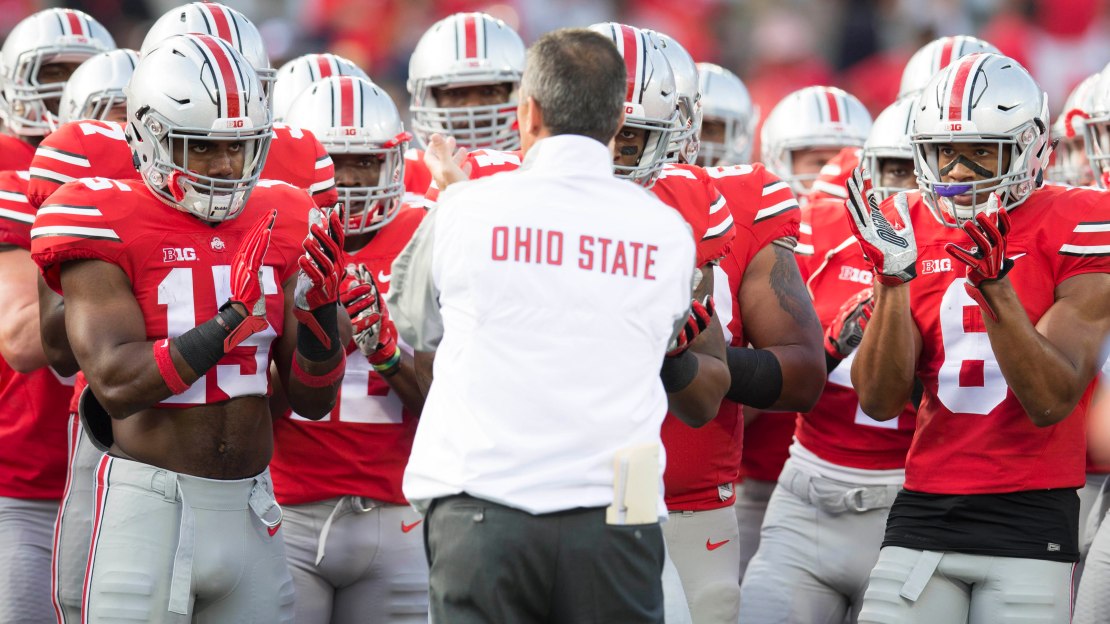 So, what if Ohio State quarterback Cardale Jones gets injured? Who will take snaps for the Buckeyes? True freshman Stephen Collier is on deck, according to Cleveland.com. The staff wants to redshirt the kid, but they are bringing him along just in case.

A former three-star prospect from Leesburg (Ga.) Lee County, Collier maintains that he'd be capable in the event the Buckeyes need him. If they do, it will be on college football's biggest stage.

"What's it like to be No. 2? You just always have to be ready," Collier said. "When you're at No. 4 you kind of have a buffer zone. I mean, you're taking things seriously and preparing, but the urgency is a little bit different when you go to No. 2."

A nice look from HawkCentral.com at nine moments/decisions that shaped 2014 Iowa football.

It?s true, the Big Ten is an underdog in all 10 of its bowl games. Mike Griffith of Mlive.com knows what?s at stake: a chance to gain some credibility.

Michigan State athletic director Mark Hollis said it's up to the Big Ten teams to win their games and change perception.

"It's important in the Big Ten for our programs to go out and execute, and even though I understand we may not be favored, it's on us to win these games," Hollis said. "It?s one thing to get positioned to play in the games, it's another to go out and win the games, so we're cheering on our fellow Big Ten members."

His reputation is now enhanced after the Lions finished the regular season ranked No. 1 in the country in rush defense (84.8 yards per game) and No. 2 in total defense (269.8 yards).

There are a lot of good offensive linemen in the Big Ten. One you rarely hear about is Rutgers? Kaleb Johnson, who is prepping to make his 50th straight start in the bowl game. Nice profile on the mammoth Scarlet Knight by Dan Duggan of NJ.com.

Nice piece by Teddy Greenstein of the Chicago Tribune on how Northwestern uses social media to connect with recruits.

OMG. You will love this. #informative

Barry Alvarez will come out of his athletic director?s office to coach for a second time in two seasons. He learned a few things from the last time he did it in the Rose Bowl vs. Stanford, a game Alvarez lost.

?Coaching the game, I did learn a few things last time, as far as communicating with the staff,? Alvarez said. ?Giving them more expectations of what I want, what my role will be and what I expect their role to be. I tried to be very clear-cut (Friday). A few of the guys weren?t there. They?re not back from recruiting yet. But I was very pleased. The coaches were very receptive.?

Speaking of Wisconsin, departed coach Gary Andersen says his departure had nothing to do with his relationship with Alvarez.

Some have portrayed Alvarez, who coached the Badgers to three Big Ten and Rose Bowl titles during his 16-season run as coach from 1990 to 2005, as a meddler in his new role. But Andersen went out of his way to shoot down that theory.

?Barry Alvarez is a Hall of Fame head coach,? Andersen said. ?He?s a Hall of Fame athletic director in my book and in my mind. The one thing that I just want to make sure that everybody understands, it has nothing to do with the relationship that I had with Coach Alvarez. In my opinion, we?ll talk a lot as we continue to move forward. He helped me. He was not nosy in football whatsoever. ? I want to make sure that everybody understands that that?s not the fact of me leaving.?

Fun read from Tom Shatel of Omaha.com, who attended the College Football Awards gala in Orlando last Thursday. He was rubbing elbows with the elite of the elite!

Turns out, it was a tough time for Wisconsin Melvin Gordon, who found out his coach was leaving that day.

?He (Gordon) found out when he walked off the plane,? said Nebraska?s Ameer Abdullah, who along with Gordon was at the ceremony as part of the Doak Walker Award announcement.

Abdullah could sympathize. He?s still getting over Bo Pelini being fired.

?It?s been an emotional week,? Abdullah said. ?Not only for myself but for the entire senior class, entire football team. This really hurts. But the one thing I know Coach Bo will want us to do is go out and prepare to win the (Holiday Bowl), finish things out on a good note.

?We learned so much more than football from these coaches. We learned about winning in life. I love those (coaches) and I want to send them out the right way.?

What were Abdullah?s thoughts on the firing?

?I hold Coach Bo in a high regard,? he said. ?I think he proved his case, but the university made their choice. Hopefully they made the right choice.?

Another game, another loss for Michigan hoops, which is now 6-4 after a loss at Arizona over the weekend. John Beilein is preaching patience. What else can he preach, for crying out loud? The Wolverines went to the Final Four and Elite Eight the last two seasons. The worm has to turn at some point.

Among other things, Mlive.com points out, Saturday's loss in Tucson illustrated the gulf that Michigan must fill to return to its now lofty standards. Beilein's point was that, with a roster of six freshmen, two sophomores, two juniors and one senior, the hole won't be filled overnight.