BTN LiveBIG: At Penn State, the grass may not be greener, but it grows faster 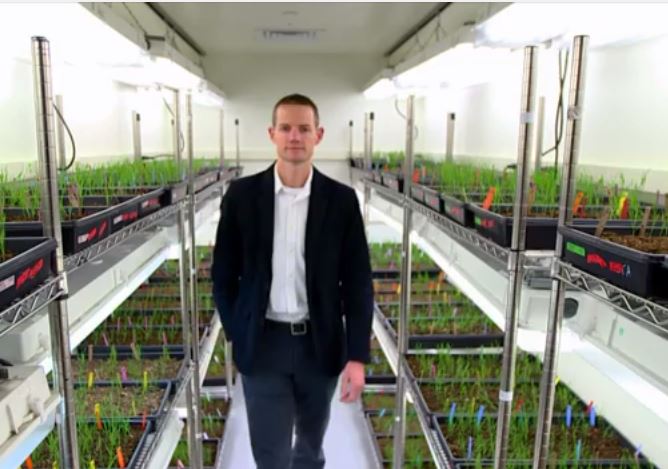 Researchers at Penn State University are studying how this hardy little grass species thrives in all kinds of conditions based on amplified genes in thousands of individual plants. Those genes are then tagged to determine which ones can thrive in certain climates.

?These seeds have activation tag lines on them, which are little bits of DNA inserted into their genome,? said Liam Farrell, an undergraduate researcher at Penn State?s Anderson Lab. ?We?re going to grow these seeds up ? and then we?re going to take those plants, examine their DNA, replicate a bunch and try to identify the specific gene that?s responsible for drought resistance.?

Why brachypodium distachyon? Two reasons: First, it grows extremely fast and in small spaces - a little room in Happy Valley, for example. Second, this particular species is closely related to crops like wheat, rice and barley, and can serve as a model for gene amplification in those plants.

?That allows us to be able to cultivate it in the lab and do experiments at a much faster pace than we would be able to do with something like maize or wheat,? explained Dr. Charles Anderson, assistant professor of biology at Penn State and director of this initiative.

This research is intended to help improve agriculture production in global regions that have the hottest, driest weather - which, incidentally, are home to some of the poorest countries on Earth.

?So many farmers around the world are already on the edge in terms of the climate that they face,? Anderson said. ?They?re dealing with soil that?s poor in nutrients or rainfall patterns that make it very difficult for them to grow enough food to feed their families and their communities.?

?With the current issues on global warming and carbon emissions, those problems are only getting worse,? Farrell said. ?We need to act faster in order to find plants that are resistant to those sorts of conditions.?

Watch the one-minute video above to learn more about the impact of Penn State?s research in this area.