Dienhart: Coaching candidates who would make sense at Wisconsin 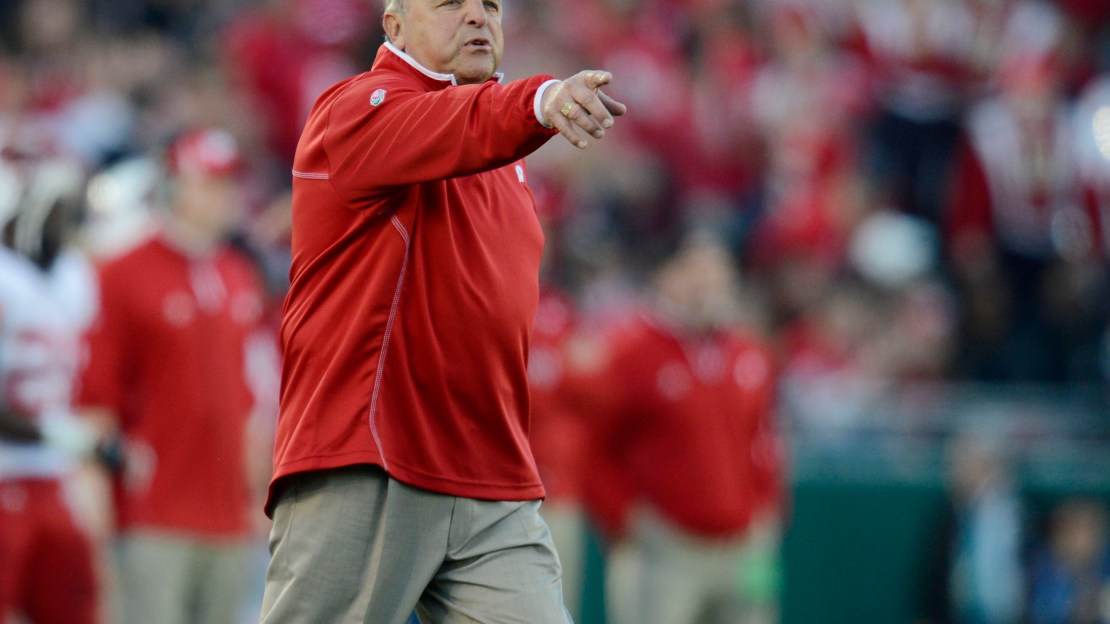 Wisconsin athletic director Barry Alvarez has the ?Help Wanted? sign out again for the second time in three years with Gary Andersen inexplicably off to coach Oregon State. It's worth noting that Alvarez's first two hires were defensive guys. Maybe he goes offense this time. Just a thought.

And know this: Andersen supposedly was frustrated by Wisconsin's admissions standards. Don't expect UW to change those, making it possible Alvarez will look for a coach familiar with Wisconsin and who knows how to work within the framework of the school and program.

Here are some potential targets for Alvarez.

Paul Chryst, Pitt head coach. This is the first call Alvarez makes, right? The guy bleeds Badger red. He?s a Madison native and UW alum who came to prominence as an offensive coordinator for the Badgers from 2005-2011. But Chryst, 49, hasn?t exactly set the world on fire in three seasons at Pitt, going 19-19. And he lacks pizzazz from a personality standpoint, but Chryst is a smart offensive mind who seemingly would yearn for this job.

Pat Narduzzi, Michigan State DC. If this perpetually hot commodity ever is gonna jump for a head coaching job, this may be it. He knows the Big Ten from his tenure running Mark Dantonio?s defenses since 2007. The 48-year-old Narduzzi is an intense and smart coach who could look at the Wisconsin job as a destination gig. But can Alvarez take a chance on a guy who never has been a head coach?

Dave Doeren, N.C. State. He was on the Badger staff from 2006-2010, serving as defensive coordinator from 2008-10. He excelled, too. The 43-year-old Doeren then enjoyed a successful two-year run at Northern Illinois, going 23-4 before landing the N.C. State job. Doeren is 10-14 in two seasons in Raleigh and just 3-13 in the ACC. He?s an uber-intense coach who may be looking to bail on N.C. State, where winning is difficult. No doubt, he would take Alvarez?s call.

Al Golden, Miami (Fla.). The Hurricanes coach was mentioned for the post the last time it opened. Golden, 45, earned his chops making Temple matter from 2006-2010. No easy feat. He has been in Coral Gables since 2011 and has had middling success (28-21 overall; 16-16 ACC) for a program that has had to deal with NCAA issues. Would Golden be willing to leave with the program perhaps ready to turn? And the upside in Miami is better than in Madison.

Darrell Bevell, Seattle Seahawks offensive coordinator. The former Badgers quarterback would bring NFL cachet to Madison. The recruits would love that. And, there?s no denying that Bevell, 44, knows his Xs and Os. But he never has been a head coach. And his only college experience is as a receivers coach at UConn from 1998-99.

Justin Fuente, Memphis head coach. The 38-year-old has become a hot commodity by making Memphis football matter, which has been no easy task. The Tigers are champs of the America Athletic Conference with a 9-3 mark after going 7-17 his first two seasons. The former Oklahoma quarterback has no Big Ten ties, running the TCU offense before landing the Memphis gig in 2012. If Wisconsin doesn?t land him, some big-time school soon will.

Greg Schiano. He?s available now after not working in 2014 and getting fired by the Tampa Bay Buccaneers, where he went 11-21 in two dreary seasons. The 48-year-old Schiano earned praise for making Rutgers football matter from 2001-2011 with a 68-67 record and six bowls. But he?s a defensive guy in a sport that tilts toward offensive guys.

Brock Spack, Illinois State. Wanna think outside the box? This is it. He and Barry Alvarez are well-acquainted from Spack?s days as Purdue?s defensive coordinator from 1997-2008. In fact, Alvarez tried to hire Spack from Purdue at one time. Spack is a Big Ten guy who has proven to be a good head coach at Illinois State, going 43-25 since taking over a moribund program in 2009. This is Spack?s best season yet, as 11-1 ISU is in the FCS playoff quarterfinals.

Steve Addazio, Boston College. He has revived BC, going 14-11 in two years. He was 13-11 in two years at Temple before that. Addazio is an offensive guy who likes to run the ball (Wisconsin would like that.). The 55-year-old Addazio has been offensive coordinator at Indiana (2002-04) and Florida (2009-10). He also has a great personality.

Dave Aranda, Wisconsin DC. If Alvarez were to give the job to anyone on the current staff, it would figure to be this guy. A coaching prodigy, Aranda built one of the nation?s top defenses this year in Madison. He also has been a coordinator at Cal Lutheran, Delta State, Southern Utah, Hawaii and Utah State. And he?s only 37. The always intense ?Professor? may be ready to run a program.

Matt Campbell, Toledo. He?s just 35, and Campbell already has been a head coach for three seasons. And, he?s doing well, going 25-13 at Toledo with an 18-6 MAC record. Campbell is an offensive coach who appears to have a huge upside. A move to Wisconsin would be a logical next step for Campbell. The lone fear: How long would the Ohio native stay if he had big success?