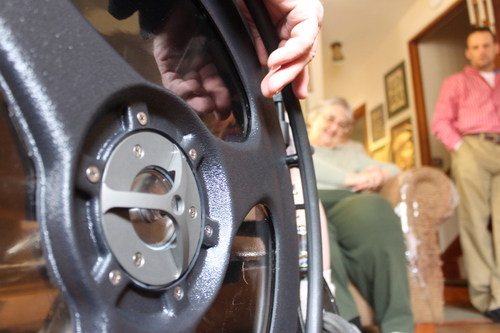 A novel idea from a pair of former University of Illinois students led to a small business that could potentially revolutionize wheelchair manufacturing - which, historically, is not exactly the most dynamic industry.

The company, called IntelliWheels, applies the concept of bicycle gears to wheelchairs, with the aim of giving the user more mobility and speed. Specifically, it claims its solutions can help wheelchair users move with half the effort without the use of motors or additional maintenance.

Co-founders Marissa Siebel and Scott Daigle started the company nearly five years ago. Daigle, CEO of IntelliWheels, got the idea for the product as an Illinois student. While watching wheelchair users get around, he noticed that they could go fast, but the physical strain of traversing long distances across campus was evident.

?It?s a couple miles end-to-end, and we have a very strong wheelchair user population,? he said. ?As I watched the way people were using their wheelchairs to get around campus, I noticed that everyone would reach their top speed very quickly - about 1.5 times the average able-bodied walking speed. I thought that if you could shift gears on the wheelchair, you would be able to go as fast as you want at the most efficient pace.?

They combined Daigle?s engineering background with Siebel?s work with athletic training to come up with the prototypes. But there was still something missing.

?Early on, it became obvious that we needed a wheelchair user to make sure it was in line with their needs,? Siebel said.

?I showed up at the office until they caved and let me into the company,? said George, who took on the role of product manager for IntelliWheels.

[btn-post-package]Siebel acknowledged the role the University of Illinois played in helping IntelliWheels get to where it is today. The company, based in Champaign, Ill., has benefited greatly from the university?s long history of being on the cutting edge of technology to help those with disabilities.

?We had never taken a biz class before,? she said. ?We had no clue how to do it. But the university provided us [with] the tools we needed. Scott and I are a little bit ahead of that curve.?

That?s led to them serving in mentorship roles with current students looking to follow their path to small-business ownership and entrepreneurship.

?It?s all about the karma,? Siebel said. ?We have to make sure everything that?s been awarded to us can go to others.?

George feels fortunate to be part of such a good group.

?We all got very lucky,? he said. ?We have a great team. The only reason we still exist as a company is because of the team.?

Since getting off the ground, the company has raised more than $2 million in grants, including a recent $1.5 million contribution from the National Institutes of Health. That?s allowed them to hire two more engineers and be able to think more about the future of the company instead of living day-to-day. It also means pounding the pavement to get their products out to the masses.

?Positive cash flow,? Siebel said of the immediate goals. ?We?re gonna be hitting the road, peddling our goods, oftentimes hopping in our cars and meeting with others. We?re really hands-on when it comes to taking our products and showing them to people.?

Additionally, near-term objectives have led the IntelliWheels team to put a lot of emphasis on the product-development cycle.

?We?ve gotten a lot of customer feedback,? Siebel explained. ?We are trying to focus on products that people want and will help them as much as possible.?

?It is our goal to become the premier innovation house for wheelchair technologies,? Daigle added. ?And we?re already on our way.?