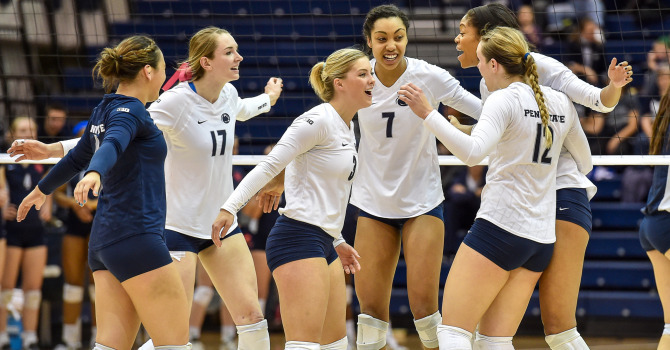 When the calendar hits December, the Big Ten asserts itself in the NCAA women's volleyball tournament.

Five Big Ten teams reached regional play this past weekend, which makes up nearly a third of the remaining teams in the field. 2014 is the fifth consecutive year the Big Ten has had at least five teams reach the round of 16, and three teams could potentially play in this year's national semifinals. For perspective, the Pac-12 sent five teams to regional play just once during that span and that came this season when the conference had a shocking abundance of ten teams selected for bids to the postseason.

A plethora of teams reaching regional action is not the only trend taking place for Big Ten volleyball in the tournament. For the fourth consecutive season, a regional is made of up of three Big Ten teams out of four, which is favorable for the national semifinal hopes of the conference, but disappointing to fans hoping to see a variety of opponents. When so many league teams reach the round of 16, it is likely to see teams from the same conference meet. However, the last few years have had some odd regional placements that have resulted in numerous Big Ten matchups.

In the past few tournaments, the Big Ten has been bunched together rather than spread out across the bracket, which could be due to several reasons. Travel is one of the biggest factors when creating the tournament bracket, and placing teams in regionals that are close to home allows the postseason to be more reasonable for all involved. The selection committee may also bunch together Big Ten teams in order to avoid the national semifinal or final being played between teams of the same conference, a flawed strategy that failed a year ago.

In 2013, six of the eight postseason Big Ten teams were placed in two regionals that would eventually produce two Final Four teams. The Los Angeles regional, understandably, had one Big Ten team. But why did the Lincoln regional, a Big Ten host site, have just Nebraska rather than at least one other conference member? Lincoln, Champaign and Lexington were all within reasonable distance of Big Ten campuses, meaning an equal split among those regionals would have made sense.

The conference would cannibalize itself in those two stacked regionals, and while still producing the eventual teams that would decide the title, the other conference members were deprived of their own chances to make a tournament run by facing opponents from their own league. Any team worthy of a championship should be able to beat competition from its own conference, but one of the major points of the tournament is to see what teams can do against opponents from around the country. There has been an absence of that in regional play for Big Ten teams the past few years.

This year, the Louisville regional features three Big Ten teams, while Ames had two and Seattle has just one. Minneapolis is the fourth regional and with the Gophers not being selected for the tournament, it still seemed logical that at least one conference member would be selected to play at a Big Ten host site, which was not the case. Wisconsin would have been the expected choice to be the top seed in Minneapolis, yet instead the Badgers will face Ohio State and potentially Penn State in the next two matches in Louisville. While a potential second meeting between the Badgers and Nittany Lions would be a classic, it seems more worthy of a national semifinal or final match than one taking place during regional play.

While disappointing, unfortunate regional draws have not stopped the Big Ten from producing two national semifinalists in each of the past two years, and the conference is capable of accomplishing it again this weekend.

Like many teams that faced Wisconsin during the regular season, the Buckeyes could not take a set from the eventual conference champion in their two meetings. The Badgers won all six sets by an average of almost seven points and out-hit the Buckeyes .304 to .140 over the two meetings.

Ohio State impressed in its four set win over No. 13 seed Kentucky on Saturday as Elizabeth Campbell and Erin Sekinger both contributed 16 kills. The Buckeyes have solid outsides, a tremendous middle in Taylor Sandbothe and great back row play, but even at their best, Ohio State is unlikely to take down the Badgers on Friday.

With the streak now stretched to 21 consecutive wins, Wisconsin has not looked vulnerable to any teams this season residing outside of the top five seeds of the tournament. The only exception came at Michigan on Nov. 7 when the Badgers had to come back in the fifth set, but other than that, a consistent high level of play has been the norm for Wisconsin.

The Nittany Lions and the Bruins met in September and Penn State won in straight sets in the Big Ten/Pac-12 Challenge. Russ Rose?s team out-hit UCLA .442 to .183 and out-blocked the Bruins 10-1. The nation's leader in kills per set, Karsta Lowe, had 20 kills in that first meeting, but Penn State rarely falls to teams that have an attack dominated by one-hitter. Lowe may get her numbers, but UCLA will have to have a secondary option step up if the Bruins are going to upset the defending champs.

It?s interesting to note that the last team to beat Penn State in regional play was UCLA in 2011; freshman year for Micha Hancock and the other Nittany Lion seniors. The Bruins are also one of only two teams nationally that have a winning record (7-5) against Penn State in the overall series (minimum ten matches played).

How tough is SEC volleyball? Five teams reached the tournament and just one remains in the final 16 teams. Florida went 18-0 in the SEC and knocked off No. 2 seed Texas in a non-conference regular season finale. The Gators have just three losses this season, to Texas in an earlier meeting, to Florida State and to Marquette. Florida has the nation?s leader in hitting percentage, freshman Rhamat Alhassan, the SEC Player of the Year, Alex Holston, and three other players who average two kills per set. Illinois has faced and beaten better this season.

The Illini defeated Penn State and Nebraska on their home floors this fall. It has been mentioned often, but it bears repeating because so few teams have been able to pull off that feat. Illinois knows it can compete with any opponent. Head coach Kevin Hambly?s team took care of two matches at home in the first two rounds like a national semifinal caliber team should, by sweeping Murray State and Iowa State. All-Big Ten selection Jocelynn Birks was outstanding in those two matches, hitting over .400 in both and tallying 14 and 23 kills, respectively.

It will not be an easy task against the Gators in Ames, but Illinois has numerous options, as well as stellar defense to advance to a potential regional final rematch with Stanford. Earlier this season, Hambly said the determining factor for Illinois will be the leadership on the court of Birks and Liz McMahon. This upcoming weekend is the time for those two to carry this team to a return trip to the national semifinal.

Nebraska at Washington - Friday at 9:30 ET

Nebraska and Washington will once again meet in regional play in a tournament series that has provided some incredible moments. This is the third time in the past five years these two teams have met in a regional semifinal with the 2012 match going to the Huskers and the 2010 meeting going to the Huskies. Back in 2008, Nebraska came back from an 0-2 deficit to win an epic five setter against Washington to advance to the national semifinal, the last Final Four appearance by the Huskers. Friday night could be just as memorable if Nebraska can pull off the upset.

John Cook?s team is coming off a five set victory over Utah, one of just two teams to beat Washington this season. Washington has lost just once at home in the past two years, to eventual champion Penn State in the national semifinal a year ago.

The task for the Huskers will be finding a way to slow down two-time Pac-12 Player of Year and last year?s AVCA National Player of the Year, Krista Vansant. Vansant averages 4.7 kills per set this season, which ranks ninth in the nation. She has combined for 38 kills and 19 digs in Washington?s first two tournament matches. If the Huskers can find a way to contain Vansant, then they will have a chance to win.