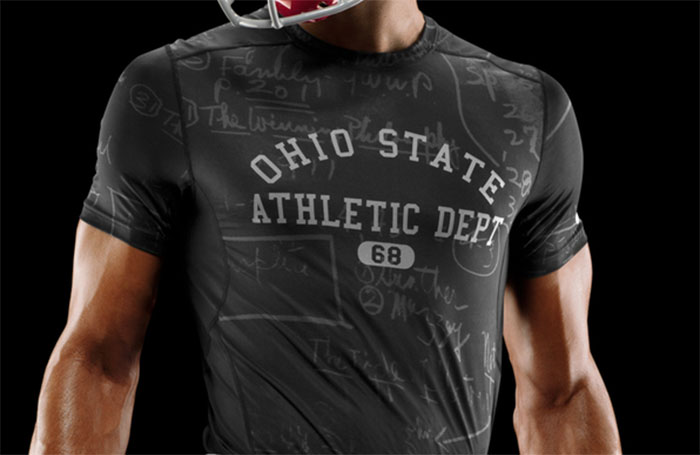 Hey, y'all saw these right? It'll be a white uni for @SugarBowlNola but use your imagination. Lookin good! #GoBucks pic.twitter.com/6NxiNtp4We

All four teams in the College Football Playoff, including Big Ten champ and No. 4 Ohio State, are Nike schools.

That being the case, Nike released new alternate designs for all four teams to wear in the inaugural playoff, starting Jan. 1, with No. 1 Alabama vs. Ohio State in the Sugar Bowl and No. 2 Oregon vs. No. 3 Florida State in the Rose Bowl.

Ohio State's uniform is a throwback to the 2002 design the Buckeyes wore during its last national championship.

That means the gray stripes on the sleeves are back. The black shoulder numbers are a nod to the 1968 team, according to BuckeyesSports.com.

Nike says it made home and away designs for all teams, and it remains to be seen which uniform the Buckeyes will be wearing against the top-ranked Tide.

Either way, Ohio State will be wearing this sweet baselayer that includes chalkboard writing from iconic coach Woody Hayes.