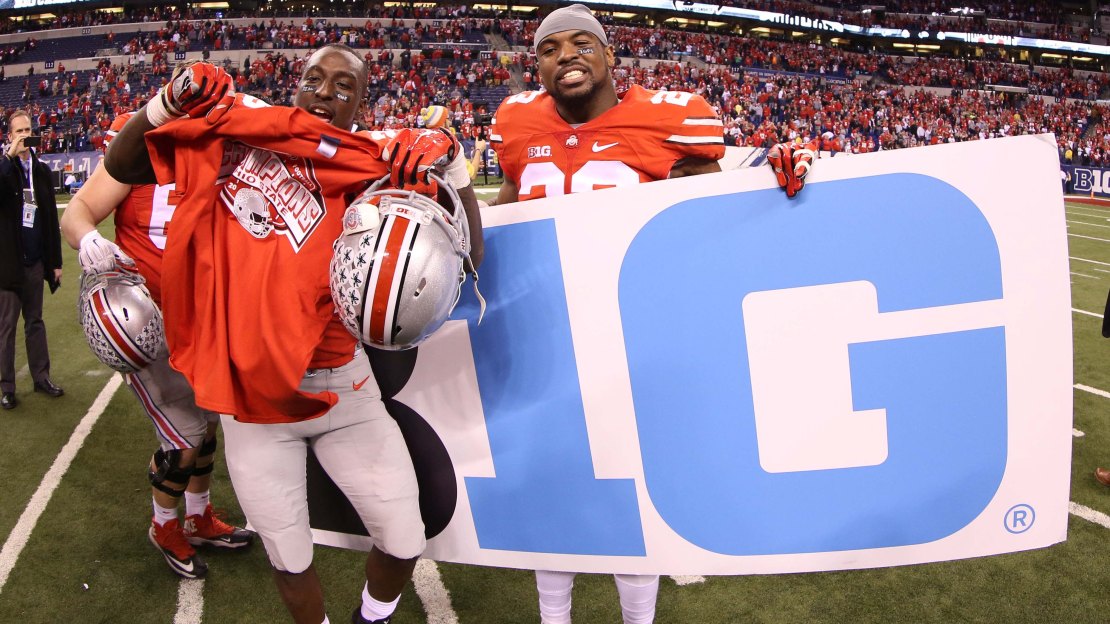 The bowl slots are filled. All 38 matchups are set, including a Big Ten record-tying 10 bowls.

The headliner is pretty simple, really: No. 4 Ohio State vs. No. 1 Alabama, in the Sugar Bowl.

Win that semifinal matchup that pits Urban Meyer vs. Nick Saban, and the Buckeyes would face the No. 2 Oregon-No. 3 Florida State winner in the title game.

How do the rest of the Big Ten's bowls stack up? That's the question I'm considering here, and now it?s time to sort through the flurry of bowl announcements Sunday night.

1. Ohio State vs. Alabama, Sugar Bowl (AP preview). It?s a national semifinal playoff game. That says enough. The winner advances to play for the national championship vs. the victor of the Rose Bowl between Oregon and Florida State. This tilt will feature two of the nation?s best coaches. Urban Meyer has won two national titles; Nick Saban has won four. The two have faced each other three times, with Saban holding a 2-1 edge. This is an atypical Crimson Tide squad in that its trademark is a prolific offense led by the best wideout in America: Amari Cooper. This will be a nice test for a Buckeye pass defense that has become a strength under the stewardship of co-defensive coordinator Chris Ash. And can the Cinderella story of former third-string QB Cardale Jones continue?

2. Michigan State vs. Baylor, Cotton Bowl (AP preview). The Bears felt they deserved a spot in the playoff. Alas, BU finished fifth. Will it be motivated to play in this game? This clash will feature two very good offenses. And few bowls will have a better battle of quarterbacks than MSU?s Connor Cook and Baylor?s Bryce Petty, who was a Heisman contender at one point. The running back clash between Jeremy Langford and Shock Linwood also will be fun. The difference could come down to defense, as the Spartans have a big edge. And few teams take away the ball as well as MSU, which is a plus-33. Still, this may be a high-scoring game.

3. Minnesota vs. Missouri, Citrus Bowl (AP preview). An intriguing clash between two of the top coaching staffs in the nation. In many ways, Jerry Kill can use Gary Pinkel?s program as a model in building his program. The schools are similar in many ways. On the field, each team is known for playing salty defense. The Tigers, who lost the SEC title game for a second season in a row, had one of the nation?s top defensive end duos in Shane Ray and Markus Golden. The Gophers are coming off back-to-back eight-win seasons for the first time since 2002-03. Minnesota is looking for its first bowl victory since 2004. Whichever team can pass best may win.

4. Wisconsin vs. Auburn, Outback Bowl (AP preview). The Badgers sat on the edge of a Big Ten championship but landed here after getting drummed, 59-0, in the league title game by Ohio State. The Tigers lost three of their last four after opening 7-1. If you like rushing games, this one is for you. The Tigers rank 12th nationally and Wisconsin is fourth. Badger back Melvin Gordon is the star attraction, rushing for 2,336 yards this season. He needs 293 yards to break Barry Sanders? 1988 single-season rushing record. AU allows 149.5 yards rushing. It will be fun to watch the Wisconsin defense matchup with Auburn quarterback Nick Marshall and running back Cameron Artis-Payne, who has 1,428 yards rushing.

5. Nebraska vs. USC, Holiday Bowl (AP preview). A fun clash between two of college football?s bluebloods. The Cornhuskers will face one of the nation?s top quarterbacks in Cody Kessler. In a twist, USC coach Steve Sarkisian coached Washington to a Holiday Bowl win vs. Nebraska in 2010. The Huskers will be led by interim coach Barney Cotton. It will be the last game for Nebraska icon Ameer Abdullah, who will face a Trojans squad that allows 132.5 yards rushing. Keep an eye on USC DT Leonard Williams, a future first-round draft pick. He may be the best player on the field.

6. Iowa vs. Tennessee, TaxSlayer Bowl. Defense is the name of the game for these squads. Tennessee allowed 23.9 points per game this season, and Iowa allowed only 24.0 points a game. This also is a contrast in expectations. Much was expected of the Hawkeyes this year, who were picked by some to win the West but instead came in fourth. Iowa needs a win to clean its palate after losing three of its last four games. The Volunteers are the ultimate work in progress under first-year coach Butch Jones, playing over 23 true freshmen-more than any other school in America. Tennessee?s best days are ahead of it. A win here is gravy.

7. Penn State vs. Boston College, Pinstripe Bowl (AP preview). An interesting matchup for the Nittany Lions. Each team has one of the best rush defenses in the nation, as Penn State is No. 1 in the nation (84.8 ypg) and BC is No. 4 (94.8 ypg). Can PSU get any traction with a line that has struggled to get a push all season? The Nittany Lions bring no mojo into the game, going 2-6 down the stretch. A win would a nice boost going into the offseason for James Franklin and Co. Bost College QB Tyler Murphy is athletic and will be a good challenge for the PSU defense.

8. Maryland vs. Stanford, Foster Farms Bowl (AP preview). This will be a nice measuring stick for the Terps, who finished 7-5 against one of the toughest schedules in the Big Ten. The Cardinal is always a physical and well-coached team under David Shaw. The offensive line will pose a nice test for Maryland?s front, which has underrated athletic ability. Watch the top Terp wideouts battle standout Stanford DB Jordan Richards. Also, Maryland must protect QB C.J. Brown.

9. Rutgers vs. North Carolina, Quick Lane Bowl (AP preview). This may not be where 7-5 RU wanted to land. But, it has to make the best of it vs. a Tar Heels club that beat the likes of Georgia Tech, Virginia and Duke this season. Coach Larry Fedora has a strong offense that averages 34.3 points and has a good QB in Marquise Williams, a run-pass threat who set school single-season records for total offense (3,607), touchdowns accounted for (32) and touchdowns rushing by a quarterback (12) in 2014.

10. Illinois vs. Louisiana Tech, Heart of Dallas (AP preview). The Illini will arrive in the iconic Cotton Bowl hot, winning their last two games to become bowl-eligible. The team has been sparked by backup QB Reilly O?Toole and better defense. The Bulldogs lost the C-USA title game to Marshall. This is a club that plays good defense behind coach Skip Holtz. That unit includes former Illini Houston Bates.