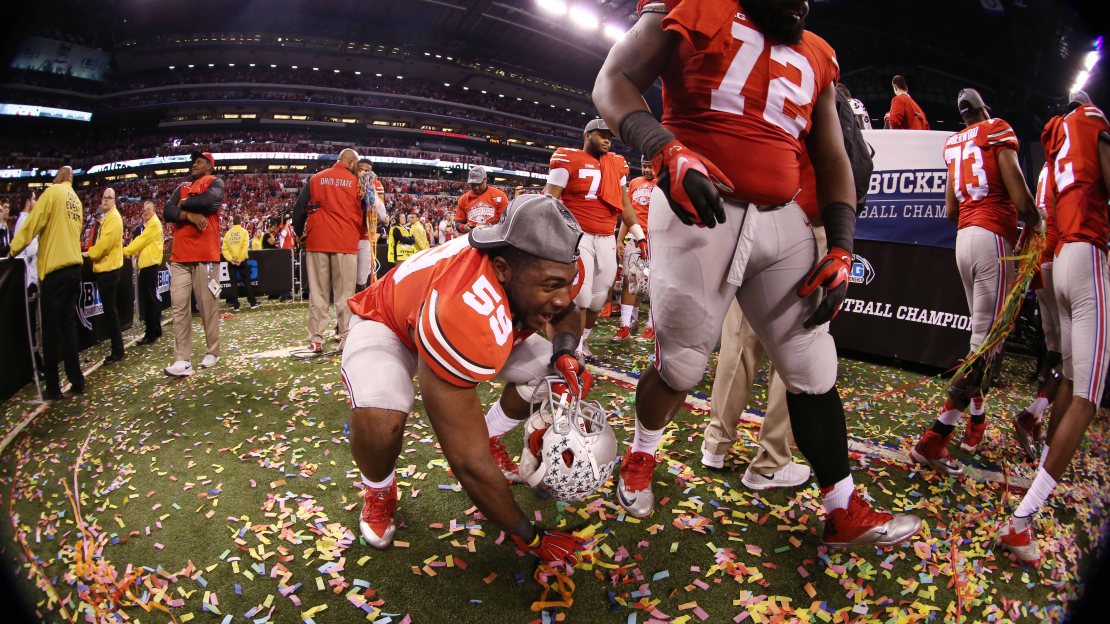 The Buckeyes, the No. 4 seed, will play Alabama, the No. 1 seed, in the Sugar Bowl on New Year's Day. The winner will play the victor of the No. 2 Oregon-No. 3 Florida State semifinal.

Get my initial take on all 10 Big Ten bowl matchups below.

ILLINOIS – Heart of Dallas Bowl vs. Louisiana Tech. The Fighting Illini won their last two games to get bowl eligible. Can the hot streak continue behind an offense that has found life under QB Reilly O?Toole? The Bulldogs, who average almost 38 points, won their division in C-USA but lost two out of three to end the season, including dropping the league title game to Marshall on Saturday.

IOWA – TaxSlayer Bowl vs. Tennessee. The Hawkeyes had higher aspirations but fell to this spot after losing three of their last four games-including back-to-back home games to close the season. This is a chance for Iowa to end on an up note vs. a Tennessee team that turned it on down the stretch to become bowl eligible. This one may come down to which school can play the best defense and force the most turnovers.

The Hawks will be swarming Jacksonville for the @taxslayerbowl! #GoHawks #Swarm2014 pic.twitter.com/lckXIXXy5r

MARYLAND – Foster Farms Bowl vs. Stanford.  Big Ten newcomer Maryland will get a chance to rinse the bad taste from its mouth from that season-ending loss at home to Rutgers by taking on Stanford in the Foster Farms Bowl. The Cardinal has been one of the premier programs in the Pac-12 in recent years, playing a physical brand of football built around a punishing ground game and strong defense. This will be a good measuring stick for Randy Edsall?s program.

MICHIGAN STATE – Cotton Bowl vs. No. 5 Baylor. The Spartans landed a plum spot here vs. Baylor, which won the Big 12 and had a great case to be included in the playoff. Alas, the Bears finished No. 5 in the final College Football Poll. Each of these clubs has a terrific offense led by QBs Connor Cook and Bryce Petty. The Spartans are No. 2 in the Big Ten in scoring (43.1 ppg) and total offense (496.5 ypg). Baylor is No. 1 in the nation in scoring (48.8 ppg) and total offense (581.3 ypg). Read my full take on this game.

MINNESOTA – Citrus Bowl vs. No. 16 Missouri. The Golden Gophers will take on a strong Missouri team in the Citrus Bowl that is coming off back-to-back SEC East titles. This game will feature two of the top coaching staffs in the nation. And each squad plays good defense. The offenses have been spotty at times, but Mizzou?s is playing better than Minnesota?s down the stretch. Jerry Kill has the Golden Gophers in a bowl for the third season in a row. This trip to Orlando rates as one of the most prime landing spots for the program since consecutive Rose Bowl junkets after the 1960 and 1961 seasons. Minnesota is 3-4-1 all-time vs. Missouri, losing the last three games. The last meeting was in 1970 in Columbia.

We'll be ringing in the New Year in Florida! #Gophers vs. Missouri at the @BWWCitrusBowl. http://t.co/e7jpfa7dvp pic.twitter.com/iOxtkaYnkw

NEBRASKA – Holiday Bowl vs. No. 24 USC. Many felt the Cornhuskers would be headed to California after playing in bowls in Florida the last three years (Captial One, Capital One, Gator). And, sure enough, it has happened. Nebraska will take on USC in a battle between two of the sport?s biggest brands. Nebraska was in the Holiday in 2009-10, and back in 1998, too. The Huskers are 0-3-1 all-time vs. the Trojans. It will be fun to see what Nebraska?s defense can do vs. USC and its star QB Cody Kessler.

OHIO STATE – Sugar Bowl (playoff) vs. No. 1 Alabama. The Buckeyes, the No. 4 seed, draw No. 1 Alabama.  Win that, and Ohio State will battle the winner of the No. 2 Oregon vs. No. 3 Florida State clash in the national championship. The Buckeyes are 12-1, currently riding an 11-game winning streak-with nine triumphs vs. bowl-eligible teams–since falling at home to Virginia Tech in the second game of the season. Read more full take on this game.

PENN STATE – Pinstripe Bowl vs. Boston College. The Nittany Lions are back in the bowl business after missing the last two seasons while on NCAA probation, taking on Boston College in Gotham. PSU?s bowl ban was rescinded in the fall, paving the way for this trip. Penn State will arrive wheezing, going 2-6 down the stretch after starting 4-0. The Eagles are a tough, physical squad led by Steve Addazio, who some think may emerge as a target for the Michigan job. Expect a low-scoring game that could be decided by a defensive touchdown.

JUST ANNOUNCED: The Nittany Lions will represent the #B1G in the 2014 @PinstripeBowl! pic.twitter.com/ias47zWEaR

It?s official – @RFootball vs. North Carolina in the @quicklanebowl Dec. 26 at Ford Field in Detroit! pic.twitter.com/cP3d1xbeu5

WISCONSIN – Outback Bowl vs. No 19 Auburn. The Badgers will be looking to rebound from its 59-0 beatdown in the Big Ten title game to Ohio State that ended a seven-game winning streak. Auburn lost three of its last four games to fall from playoff contention, as its defense struggled down the stretch. The Tigers are known for their quick-paced, high-flying offenses led by coach Gus Malzahn. How will a shell-shocked Wisconsin defense deal with all of that speed and fast tempo? Auburn is No. 3 in the SEC in total offense (489.2 ypg) and averages 35.8 points. Wisconsin was last in the Outback in 2007, losing to Tennessee. They also fell to Georgia in the 2004 Outback. The Badgers and Tigers met in the 2003 Music City (Tiger win) and 2005 Capital One (Badger win) bowls.

5th-straight year for #Badgers in January bowl game. Alabama only other team that can make that claim. pic.twitter.com/QZWrMibi68