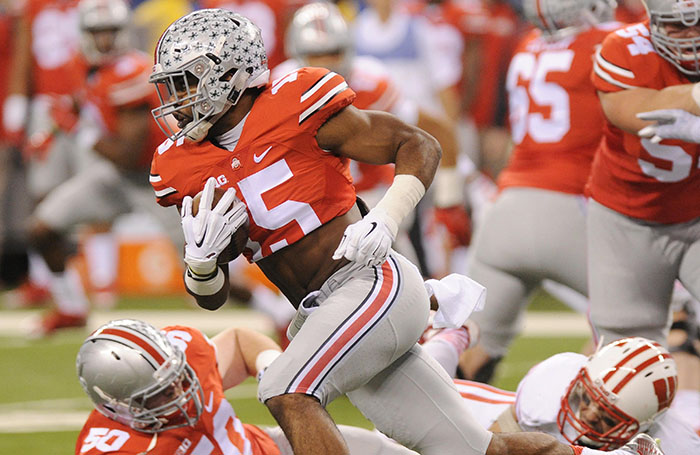 Quick take: This game couldn?t have started any better for Ohio State, which scored on two of its first three drives to jump out to a 14-0 lead. Not having to play from behind, no doubt, will help QB Cardale Jones, who is making his first career start.

Key moment: Trailing 14-0 and needing to show some life, Wisconsin QB Joel Stave had his team marching. On first down from the Wisconsin 47, however, Stave rolled to his right and fired a pass that was picked off by OSU safety Vonn Bell to snuff out the Badgers? third drive of the game.

Key play: Facing a 1st-and-10 from the Wisconsin 39-yard line, Cardale Jones heaved a bomb to the corner of the end zone that Devin Smith cradled after slipping around a defender. It capped a 6-play, 77-yard opening drive that staked the Buckeyes to a 7-0 lead, as Jones hit both of his pass attempts.

Key number: 224, yards for Ohio State. Wisconsin entered the game No. 2 in the nation in total defense, yielding 260.3 ypg.

Key score: On their third drive of the game, the Buckeyes needed one play to score. Sophomore RB Ezekiel Elliott burst up the middle for an 81-yard TD run to stake Ohio State to a 14-0 lead with 4:48 left in the opening stanza.