Big Ten Championship: 3 takeaways from each coach before Saturday 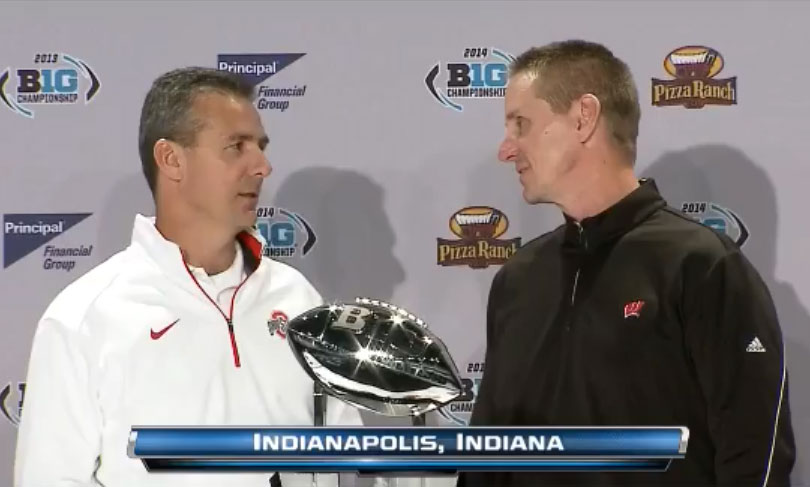 This is Meyer's second time playing in the Big Ten title game after his Buckeyes fell to Michigan State last season, which ultimately left the Buckeyes out of the BCS Championship game. For Andersen, this is his first run at a Big Ten title. Of course, this is the third time in four years the Badgers have played in this game, but the first two were under the guidance of Brett Bielema.

Here are three takeaways from each coach leading up to Saturday night's game.

1. Wisconsin's goal on offense is to wear down Ohio State's defense with the run game.

"That's always our goal. We've talked about it, and we hope that is the case. That's what we want to have happen. I don't think there is an offense in America that will sit there and say that that's not what they want to have happen — to use their physical running game at the end of the game to be able to win the game or give them an opportunity to be able to play well as the game goes on. But in this league, that is very hard to do that."

2. The Badgers are not at all intimidated by the recent success of Ohio State.

3. Wisconsin's goal on defense is to throw new looks at Ohio State's offense, regardless of who is at quarterback for the Buckeyes.

"You always want to throw things at a quarterback, regardless of who the quarterback is. One of our goals is to frustrate a quarterback and put a quarterback in a position where he doesn't feel comfortable. Regardless of if that happens or not, that is always a goal, and that will never change weather it's a young man's first start, or if it's his 50th start."

"Our top concern has to be to tackle this talented ball carrier. That has to be our No. 1 goal in this game."

"He's prepared very well. Tuesday is a rugged day for anyone in practice, but I've seen the imporvement with him that I've wanted to see. A quarterback is a product of those around him. He still has to execute, but the guys around him have had very good practices as well. I'm very confident in Cardale."

3. Urban Meyer and Gary Andersen are longtime friends who have great respect for one another during their time at Utah together. Meyer served as the Utes head coach from 2003-04, while Andersen was their defensive line coach in 2004.

"Gary is a guy who I only knew briefly when we hired him (at Utah), but by the time midseason rolled around, he was one of the top guys on my staff. He's obviously one of the best in the business. We are great friends and we have a great amount of respect for each other."