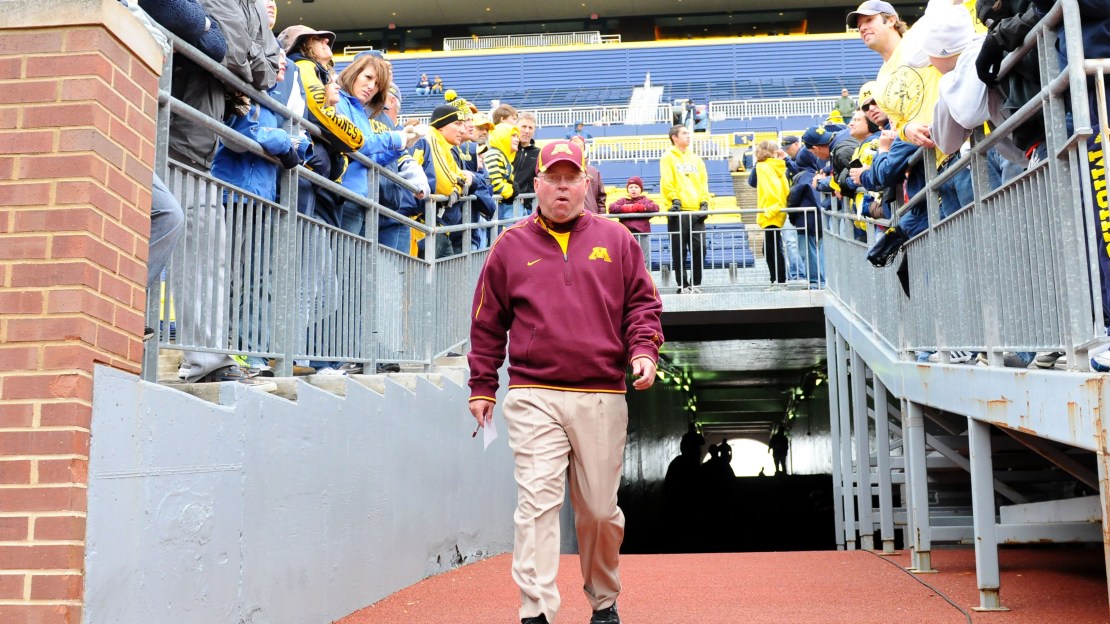 Did Jerry Kill deserve to be Big Ten Coach of the Year? You won?t get an argument from me. But a case certainly could have been made for Ohio State?s Urban Meyer. Incredibly, a Buckeye coach hasn?t won this honor since Earle Bruce in 1979.

Of course, Ohio State faces Wisconsin on Saturday. One of the best stories of 2014 has been how Badgers QB Joel Stave has resurrected his season which began with a mental funk that saw him unable to complete the simplest of passes to finishing the season on a roll. Check out this video feature.

He?ll need a big game vs. Ohio State if the Badgers want to win.

"You wonder why," Barrett said Wednesday. "You have those little talks with God and say, 'Why now?' But you never know. You take it for what is."

Could Michigan State somehow, someway, get into the four-team playoff? Graham Couch of the Lansing State Journal says there is a tiny chance it could happen-really.

That comeback win from a 35-10 deficit last Saturday at Maryland may just have saved the job of Rutgers coach Kyle Flood.

Now, with seven wins overall and three Big Ten victories, expectations have clearly been exceeded, according to Steve Edelson of the Daily Record. The pain of the 180-44 margin of defeat at the hands of Ohio State, Nebraska, Wisconsin and Michigan State has been eased somewhat. Should RU finish the season with a postseason victory and an 8-5 record overall, well, the contract extension Flood got just before Penn State showed up at High Point Solutions Stadium for their first Big Ten game would certainly appear justified.

Purdue A.D. Morgan Burke recently held a presser to address the state of Boilermaker football. And, business isn?t good. In perhaps the understatement of the year, Burke calls the lack of wins ?discouraging.?

If anyone is keeping count, Darrell Hazell is 4-20 overall and 1-15 in the Big Ten in two seasons in West Lafayette. And two wins have come vs. FCS foes. Burke said the program had a $3 million shortfall in ticket sales. Athletic department reserves will be used to make up the difference. Burke, however, said the department is expected to show an operating profit of $5-5.5 million before paying the debt on Ross-Ade Stadium and Mackey Arena.

"The debt is about $9 million. You'll going to pull $3-4 million in savings. We've got that, but we can't do it indefinitely," he said.

Kudos to Illinois? Tim Beckman for getting Illinois to bowl eligibility. Now, the Champaign News-Gazette wonders what he?ll have to do in 2015 to keep things pointed up. Loren Tate has some ideas.

Things begin with showing promise in a bowl. It also would help to beat a foe no one expects Illinois to beat. But, let?s take this a step at a time-win the bowl and look good doing it.

Most feel Indiana coach Kevin Wilson got a mulligan for 2014, what with the season-ending shoulder injury suffered by QB Nate Sudfeld. But 2015 will be his fifth season in Bloomington. Improvement and a push for a bowl will be expected-regardless of circumstances.

David Woods of IndyStar.com notes that Wilson was awarded a seven-year contract, and 2015 will be Year 5. It will represent a crossroads for him at one of the toughest rebuilding jobs in college football.

Northwestern finished 5-7, missing the postseason for a second year in a row. But InsideNU.com has five positives from the season.

At the top of the list: freshman running back Justin Jackson. How good is this guy gonna be? Exactly. InsideNU.com says that despite only carrying the ball a combined 20 times in Northwestern's first two games, Jackson finished his rookie campaign with 1,388 total yards and 11 total touchdowns. He averaged 4.8 yards per carry, and 5.2 yards per touch. And in games where he was handed the carried 20-plus times, he never failed to eclipse 100 total yards.

Nebraska?s ?Help Wanted? sign hasn?t even been up for a week. But rumors already are flying. The latest buzz has the Cornhuskers eyeing Arkansas coach Bret Bielema. Makes sense. He and Husker AD Shawn Eichorst are buddies from their days at Wisconsin, when Eichorst was an administrator and Bielema the head coach.

Alas, Bielema has shot down the rumblings. Welcome to the delicate dance known as the ?Coaching Carousel,? where half-truths, rumors and innuendo rule.