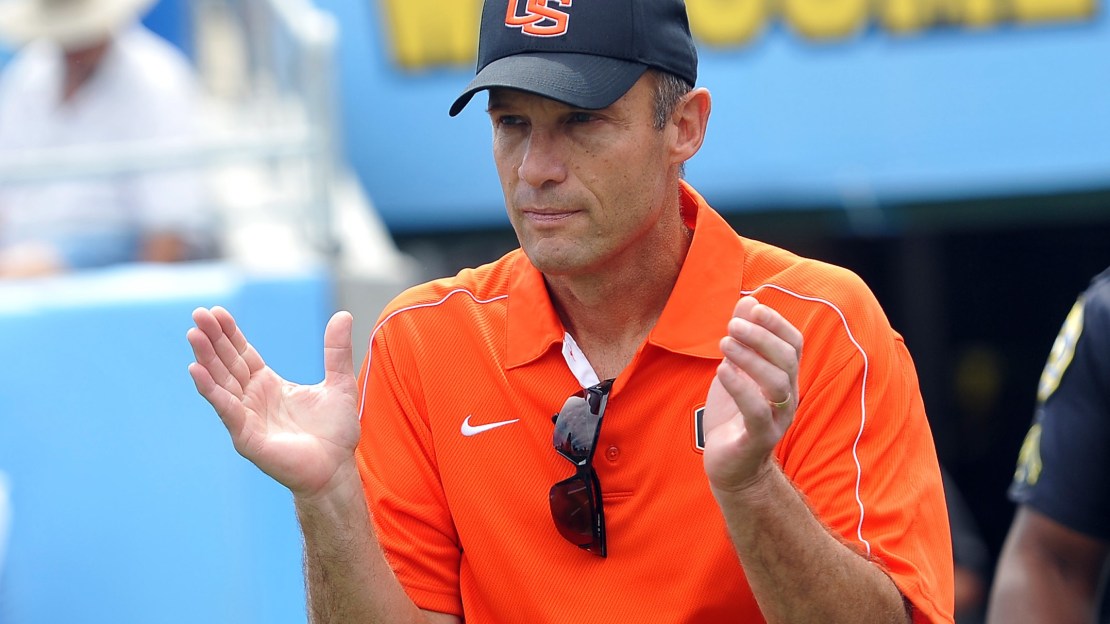 Give Nebraska credit for one thing: It acted quickly in hiring a coach by tabbing Oregon State?s Mike Riley. But did the Huskers get the right guy?

With Bo Pelini's dismissal still fresh in their minds, Huskers fans started a raging debate immediately after the Riley news broke, and that debate will stay hot right up until Nebraska?s season opener against BYU next Sept. 5. Is Riley the guy to make the program a national title contender and restore it to the relevance it enjoyed under Tom Osborne?

The bold and decisive move by Cornhuskers athletic director Shawn Eichorst was as shocking as it was swift. No one saw this coming, as the entire courtship of Riley went undetected and at lightning speed. To say Nebraska fans were stunned by this hire would be an understatement.

As recently as yesterday, rumors swirled that Arkansas? Bret Bielema was a top target. That story went away as quickly as it appeared-along with the calls of some for Nebraska to hire Jim Tressel. That was pure folly. This Huskers job opened and closed before even juicer Internet rumors could be tweeted out and blogged about, denying cyberspace weeks of the usual fun speculation.

Now we know Riley is the guy, a coach hired just four days after Eichorst gave Pelini a box and told him to pack his Swingline stapler, "N" ball cap and family photos.

The mild-mannered Riley's personality is the opposite of the often volcanic Pelini. Riley is not about bombast. He is reserved and unassuming, lacking a big, commanding presence. He?s quiet, cerebral, and at first glance can come off as a guy who may listen quietly from the back of the room instead of charging and leading from the front.

But the bottom line is this: Riley can coach. He?s a proven commodity. Riley did a lot of winning at a place where it?s difficult to do so. The son of a coach, Riley was a hometown hero in Corvallis before playing defensive back for Bear Bryant at Alabama from 1971-74. In 14 seasons at Oregon State, Riley went 93-80 overall and 58-63 in the conference at a school that for years was a classic Homecoming punching bag.

Riley arrived after working on John Robinson?s USC staff when he assumed command the first time at Oregon State in 1997. At that point, the school hadn?t had a winning record since 1970. He went 3-8 and then 5-6 before taking the San Diego Chargers post. Riley had three spectacularly unimpressive seasons in the NFL, going 14-34 from 1999-2001 before getting spit out.

Then, in a unique circumstance, Riley returned to Oregon State in 2003 after Dennis Erickson shocked the Oregon State brass by taking the San Francisco 49ers job in February 2003. Horrible timing for the school.

Enter Riley, who was with the New Orleans Saints.

In his Corvallis sequel, Riley built on what Dennis Erickson began and proceeded to post eight winning records in the next 12 seasons in one of the most challenging places to win in the Pac-12. Yes, the Beavers were just 5-7 this season, but Riley took the program to eight bowls and four seasons of nine wins or more. His best effort was 2006, when Oregon State went 10-4. Riley?s best league finish was in 2008, when Oregon State finished second in the Pac-10 with a 7-2 mark. OSU also was second in 2009 at 6-3.

Riley will inherit a Nebraska program that certainly isn?t broken. Pelini did many good things while going 67-27 overall and 39-17 in league play for seven seasons. But the former Huskers coach often flopped in big games and never got a program that hasn?t won a league title since 1999 over the hump. It?s hoped Riley can make that push in what figures to be the last push of the 61-year-old?s career.

There will be critics of this hire. There always are, and their early discussion points are valid. The skeptics will point to Riley?s age. They will shout that Riley never won a league title at Oregon State. They will call radio shows and rail that he failed in the NFL. They will go on message boards and type that he had a losing record this season and in three in his last five. But, obviously Nebraska's Eichorst believes Riley has what it takes.

This is a risk, and it's a big one. Let's remember that all hires are risks. Eichorst felt he couldn?t stand pat with Pelini, who had worn out his welcome in Lincoln.  This is Eichorst?s roll of the dice, and I believe it?s a big roll.

How many big-time up-and-coming coaches would have taken this job? The line wasn?t long the last time it opened after Bill Callahan was canned after the 2007 season.

Pressure is huge. Expectations are off the charts. Many denizens of Nebraska think the school should have tabbed native son Scott Frost, the supposed next ?big thing? who coordinates Oregon?s pinball offense. But at 39, Frost isn?t ready.

Maybe Nebraska could have lured Mississippi State?s Dan Mullen. Or maybe not. Obviously, Eichorst made Riley a top target right out of the gate and he got his man, though reports suggest there were flirtations with Bielema and Utah's Kyle Whittingham. Now Riley is Nebraska's man and Huskers fans have to deal with it.

Riley will enter a Big Ten West Division that isn?t loaded with 10,000-pound gorillas. Wisconsin is the kingpin, playing in its third Big Ten title game in four years, but the Badgers can be caught.

The losing to Minnesota has to stop, and it's time for the Huskers to prove they can move right past Iowa. Bottom line: No program in the West has the resources of Nebraska. The Cornhuskers should rule this division. It?s not a big mountain to climb. This isn?t the SEC West-or even the Big Ten East.

Unlike Pelini, Riley will arrive in Lincoln with a proven track record as a head coach. In addition to his NFL work, he served as head coach of Canada's Winnipeg Blue Bombers from 1987-1990 where he went 40-32 and won two division titles after getting the post at 33 years old.

How will this all work out? Sometimes, big risk equals big reward. It will be fascinating to watch.