BTN Hockey Report: Get ready for a weekend full of conference action 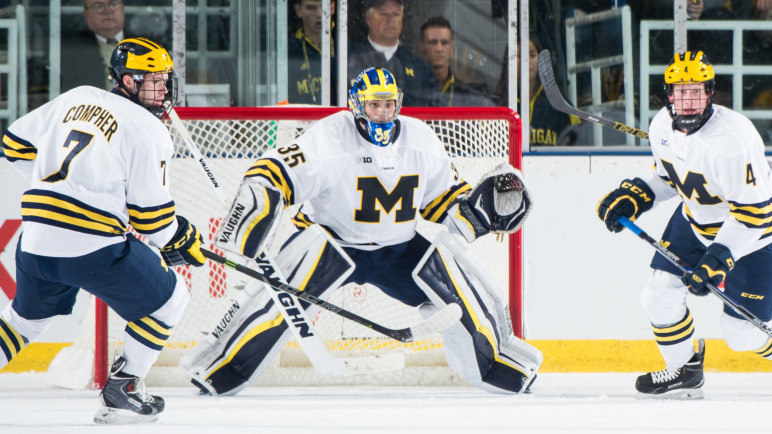 This weekend presents a Big Ten frenzy, as all six teams go head to head in conference play.

Before we look ahead to the weekend, let?s talk about how the Big Ten fared last weekend in non-conference action. The Big Ten went 7-3 overall against non-conference opponents, which means this weekend?s Big Ten play could have some interesting results.

OHIO STATE AT MICHIGAN
When: 7 p.m. ET, Friday
How to watch: Airs live on BTN (watch on BTN2Go)
Players to watch: Michigan goalie Zach Nagelvoort earned first star of the week honors and recorded a .961 save percentage while guiding the Wolverines to a series sweep last weekend. The sophomore turned aside 25 shots on Friday and 24 on Saturday. Ohio State goalie Christian Frey also had a standout weekend earning second star of the week honors. He stopped 29 shots to lead Ohio State to a 5-1 victory against Notre Dame on the road.
The latest on the Wolverines: Michigan enters the weekend 7-6-0 after a sweep over RPI last weekend and earned their first shutout of the season. The Wolverines are 1-1 in conference play after splitting with Penn State. Senior alternate captain Zach Hyman leads the team in points with 15.
The latest on the Buckeyes: Ohio State enters the weekend 5-8-1 overall after a split last weekend, falling to Western Michigan and defeating Notre Dame on the road. The Buckeyes also enter the weekend 1-1 in Big Ten play after splitting with Michigan State two weekends ago. Senior forward Tanner Fritz leads the Buckeyes with 11 points.
In Summary: Records aside, don?t count the Buckeyes out of this one; this rivalry game will be a fun one to watch in a rocking Yost arena.

NO. 6 MINNESOTA AT MICHIGAN STATE
When: 7 p.m. ET, Friday; 5 p.m. ET, Saturday
How to watch: Both games air live on BTN2Go (Friday's link; Saturday's link)
Players to watch: Minnesota?s defenseman Ben Marshall received third star of the week honors after recording three points in the games against Boston College and Northeastern. The senior scored the game-winning goal in the Gophers' 6-2 win over No. 12 Boston College on Friday. Michigan State features senior forward Matt Berry, who leads the team in points and contributed two assists and a goal over the weekend.
The latest on the Gophers: This series will be a Big Ten opener for the Gophers, who enter the weekend 8-4-0 overall. Minnesota comes off a split weekend, knocking off No. 12 Boston College, 6-2, on the road Friday, and falling to Northeastern, 2-1, on Saturday. Senior captain Kyle Rau anchors the Gophers with 11 assists and 15 points on the season.
The latest on the Spartans: Michigan State enters the series 5-8-0 overall and 1-1 in the Big Ten, with a split against Ohio State. The Spartans split with Princeton last weekend on the road. Senior forward Matt Berry and junior forward Michael Ferrantino lead the way for MSU with 13 and 12 points, respectively.
In Summary: This series will set the bar for the Spartans and give them an idea where they stand in the conference and on a national scale.

PENN STATE AT WISCONSIN
When: 9 p.m. ET, Friday and Saturday
How to watch: Friday?s game airs live on BTN2Go and ESPNews
Players to watch: Casey Bailey continues to light fire to the Penn State offense, upping his point streak to five games after this weekend. He has nine goals and 16 points on the season. Freshman defensemen Jack Dougherty will be an interesting player to watch for the Badgers, as he was chosen Tuesday as one of the 30 players named to the U.S. National Junior Team camp roster.
The latest on the Nittany Lions: Penn State is 7-4-2 overall and 1-1 in the Big Ten. The Nittany Lions most recently lost to Cornell last Saturday, falling 3-1 on the road. Taylor Holstrom continues to be a bright spot for the Nittany Lions, leading the team with 18 total points.
The latest on the Badgers: The Badgers are 1-8-1 overall after significant player turnover from last year?s lineup. Wisconsin did not earn its first win of the season until last Saturday against Ferris State. This will be opening weekend for Big Ten play for the reigning Big Ten tournament champs.
In Summary: This could be one step forward for a struggling Wisconsin unit that's looking to start over, or another sign of legitimacy for the Penn State program that's looking to prove themselves.

Here's a look at the latest poll.