Who has the edge in Big Ten title game? Here's a position-by-position look 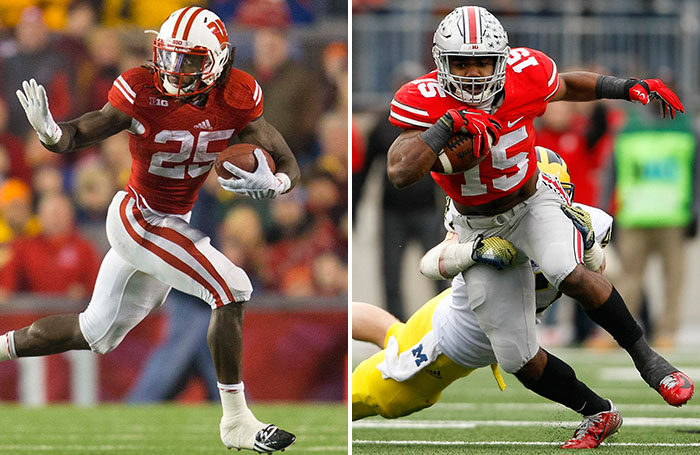 Football is a game about matchups. Who has the edge in the most categories?

Here?s a unit by unit look at Wisconsin and Ohio State as they steam toward a showdown in the Big Ten title game. And from the look of things, this should be a close game on Saturday night in Lucas Oil Stadium in Indianapolis.

QUARTERBACKS: Cardale Jones vs. Joel Stave. Not real sexy, huh? Well, it?s what we got. So, live with it. Neither team has a difference maker under center. The Buckeyes are down to Jones after J.T. Barrett was lost for the season with a broken right ankle. Jones began camp No. 2 on the depth chart and dipped to No. 3 with Barrett?s emergence. Then, Braxton Miller got hurt and Jones was No. 2 again. The redshirt sophomore played in three games in 2013, throwing two passes with 128 yards rushing and a TD. He is 10-of-17 for 118 yards this season with 206 yards rushing. Don?t be shocked to see H-back Jalin Marshall line up in the Wildcat formation often to take some burden off Jones and to give OSU a different wrinkle/look. Wisconsin has deftly balanced a two-quarterback system between Tanner McEvoy and Stave, who has come on down the stretch as a passer. He has hit at least 61 percent of his passes in each of the last four games and passed for over 200 yards twice with five TDs and an interception after not playing the first four games because of the ?yips.? He is playing well and could hit the Buckeye secondary with some big plays down field.
EDGE: Wisconsin

RUNNING BACKS: Lots of star power here. Wisconsin?s Melvin Gordon has set the Big Ten single-season rushing mark with 2,260 yards and he leads America with 26 rushing TDs. The Big Ten Offensive Player of the Year needs 369 yards to break Barry Sanders? 1988 FBS single-season rushing mark of 2,628. Backup Corey Clement, who has 830 yards, could start for most teams. Ezekiel Elliott has gotten better and better for Ohio State, running 197 times for 1,182 yards. He has six 100-yard games and three in the last four. He?s physical-and fast. Barrett was No. 2 in rushing for the Buckeyes with 938 yards. Curtis Samuel and Jalin Marshall must produce. Marshall continues to emerge as a deadly big-play weapon.
EDGE: Wisconsin

RECEIVERS: Alex Erikson has emerged as Wisconsin?s go-to wideout with 44 grabs for a corps that lacks a lot of dynamic ability. He can stretch the field. Erickson has 44 catches for 651 yards and three scores and is coming off a 5-catch for 160-yard effort vs. Minnesota. The Badgers possess an array of tight ends, headlined by Sam Arneson (25 catches with a team-high 4 TDs) and Troy Fumagalli. Devin Smith has been the ultimate big-play guy for Ohio State, averaging 25.5 yards per catch with eight TDs. Michael Thomas (40 catches, 8 TDs) and Jalin Marshall (26, 6) also are dynamic on the edge along with Evan Spencer. And the tight end duo of Jeff Heuerman and Nick Vannett has a combined 32 catches and six TDs.
EDGE: Ohio State

LINE: Stop me if you?ve heard this before-Wisconsin?s line is terrific. Tackle Rob Havenstein is the bellwether; guard Kyle Costigan is one of the toughest players in the Big Ten, helping the Badgers rank No. 2 in the nation in rushing (334.3 ypg). Center Dan Voltz, guard Dallas Lewallen and tackle Tyler Marz also earned all-league mention. The Ohio State front has morphed from a concern to a strength as it has replaced four starters. Tackle Taylor Decker and guard Pat Elflein lead the charge for the front of the No. 11 offense in the nation (503.4 ypg).
EDGE: Wisconsin

LINE: The Buckeyes have one of the best fronts in the nation led by Big Ten Defensive Player of the Year Joey Bosa, who paces the Big Ten in sacks (13.5), tackles for loss (20) and fumbles forced (4). Michael Bennett-second-team All-Big Ten–and Adolphus Washington also are forces on the interior for a Buckeyes? club that leads the Big Ten in sacks with 37. The Badgers have an active three-man front led by blue-collar talents Arthur Goldberg, Chikwe Obasih and Konrad Zagzebski. Wisconsin is No. 3 in the league in sacks (35).
EDGE: Ohio State

LINEBACKERS: Marcus Trotter, Derek Landisch, Joe Schobert and Vince Biegel may not be household names, but they more than get the job done for Wisconsin. The unit has underrated athletic ability and understands the scheme of coordinator Dave Aranda. Landisch is No. 4 in the Big Ten in sacks (8.0) and No. 5 in tackles for loss (14.5). This area hadn?t been a strength for Ohio State in recent years but it is now. Darron Lee has emerged as a quick-striking force; Raekwon McMillan is a true freshman who combines a frightening blend of power and speed. Joshua Perry is a sideline-to-sideline terror who is No. 5 in the Big Ten tackles (108).
EDGE: Even

SECONDARY: Wisconsin has one of the hardest-hitting safeties in the Big Ten in Michael Caputo, who often plays like a linebacker and is UW?s top tackler (93). Darius Hillary is part of a solid corner duo for the No. 1 pass defense in the Big Ten (156.6 ypg). Opponents complete a league-low 46.4 percent of their passes vs. the Badgers. Pass defense was a concern for Ohio State when the season dawned. And this unit has played better, ranking No. 4 in the Big Ten vs. the pass (188.2 ypg) with a league-high 18 interceptions. Vonn Bell and Tyvis Powell form one of the Big Ten?s top safety tandems. Redshirt freshman Eli Apple and Doran Grant have excelled at corner.
EDGE: Even

Wisconsin kicker Rafael Gaglianone has been a revelation as a true freshman. The Brazilian has hit 17-of-20 field-goal attempts. He has connected on 5-of-7 from beyond 40 yards with a long of 51. His misses have been from 33, 47 and 50 yards. Punter Drew Meyer averages 37.5 yards a boot with 16 inside the 20. Kenzel Doe is a weapon on returns, averaging 11.0 yards on punt returns and 23.1 on kickoffs. Jalin Marshall has run back a punt for a TD and averages 14.1 yards. He?s a true go-the-distance guy. Aussie Cameron Johnston is third in the Big Ten with a 44.2-yard punting average, downing 20 inside the 20 and boasting 11 boots over 50 yards. True freshman Sean Nuernberger has hit just 10-of-16 field-goal attempts. His long is 49 and he?s just 5-of-10 from 40-49 yards.
EDGE: Even

After being plucked from relative obscurity from Utah State, Gary Andersen has been a hit in just two seasons in Madison. He has gone 19-6 overall and 13-3 in the Big Ten. Andersen has built an underrated staff led by astute offensive coordinator Andy Ludwig and defensive coordinator Dave Aranda, nicknamed ?The Professor? for his dedication to schemes and teaching. Line coach T.J. Woods (offense) and Chad Kauha?aha?a (defense) are talented. Tight ends/special teams coach Jeff Genyk is one of the best in the business. Urban Meyer is a Hall of Fame coach who is 35-3 at Ohio State and 24-0 in Big Ten regular-season games in three seasons in Columbus. Offensive coordinator Tom Herman is a wunderkind who is destined to be a head coach. Co-defensive coordinator Chris Ash is a former Wisconsin DC who has improved OSU?s pass defense. Is there a better defensive line coach in America than Larry Johnson? Nope. Ed Warinner is a co-offensive coordinator and o-line coach with few peers. Cornerbacks/special teams coordinator Kerry Coombs won?t be outworked.
EDGE: Ohio State