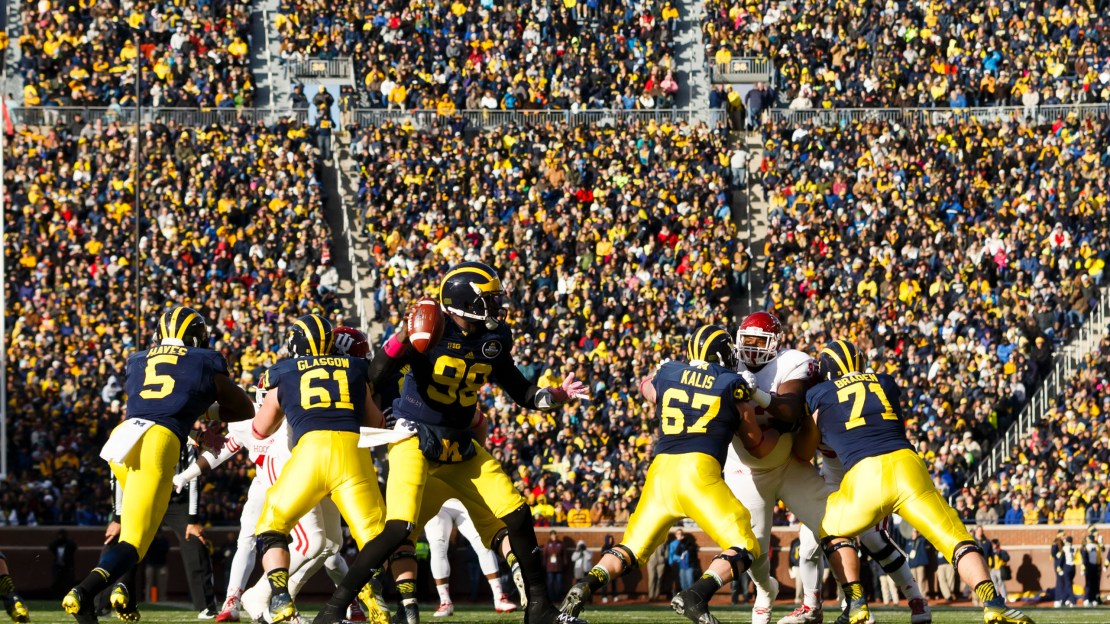 Attendance was an issue at Michigan this season. How much so? It dropped to No. 3 in the nation. This is a big deal, folks.

The Wolverines had paced America in attendance every year since 1998. Ohio State led the country this season, with an average attendance number of 106,296 in the Shoe. Texas A&M was No. 2 at 105,122.

Nick Baumgardner of Mlive.com says Michigan reported an average drop of 6,683 fans per game this season, as last year's average worked out to 111,592 per home contest.

Running back Jeremy Langford was most worthy among Griffith?s picks who fell short, in my mind. The Big Ten was too loaded with stud running backs. Langford rushed for 100 yards or more in a school-record nine straight games, and his string of 15 straight league games with 100 yards or more is the most in at least two decades, according to MSU.

Interesting piece from Scott Dochterman of the Cedar Rapids Gazette on bowl game ticket allotments being down for Big Ten schools.

Unsold bowl tickets cost the Big Ten and its member programs nearly $4.5 million after last year?s postseason. To combat those numbers, Big Ten schools will receive fewer bowl tickets coupled with smaller payouts this year. So, I ask again: What?s the point of bowl games? If bowls are the apex of the season, why the lack of interest and big money loss? Am I missing something?

Penn State vs. Pitt in a bowl? The chances look slim, according to David Jones of Pennlive.com. That?s too bad. These rivals need to play more often. And when so many bowl matchups lack pizzazz or anticipation, this certainly would have been a game to look forward to. (Sigh.)

Let?s hear it for Rutgers QB Gary Nova! The guy has had his critics over the years. But he has led the Scarlet Knights to another bowl and will leave campus as an all-time great. And he has done it all in 2014 while battling through injuries.

"It's been pretty tough, but I feel like it's part of football," said Nova, who was named Big Ten offensive player of the week for the second time this season. "I feel like everybody has little injuries and is banged up. You just have to keep fighting through. I don't think you can make excuses for your play because you're dealing with an injury."

Well, I disagree with Meyer. How can anyone say OSU is the same quality team without Barrett? Preposterous. But the Buckeyes can show their mettle with a win vs. Wisconsin.

Interesting blog from Bob Sansevere of the St. Paul Pioneer Press, who thinks Minnesota is a quarterback away from being very good.

He has a point. Mitch Leidner is a solid quarterback. But little more. The Gophers need more of a passing threat and difference maker under center to take the next step in the program?s evolution.

Omaha.com has a lot of good information on Nebraska?s search for a successor for Bo Pelini.

Speaking of Pelini, he met with his players one last time. Nice gesture. Check out these Twitter responses.

Jones was supposed to be the next man up on the quarterback depth chart but got passed by J.T. Barrett in camp. Now, Jones will start on of the biggest games in the last decade for OSU.

"I think (getting passed by Barrett) was tough for him, but him and I spoke at great length in great detail on numerous occasions about how to handle it," Ohio State offensive coordinator Tom Herman said. "He's done nothing but be a great example of how to handle that. He stayed engaged in every game plan, he understands that he's a broken shoelace - or a broken fibula - away from going in. He's taken that role very seriously, and I'm proud of him for it.?