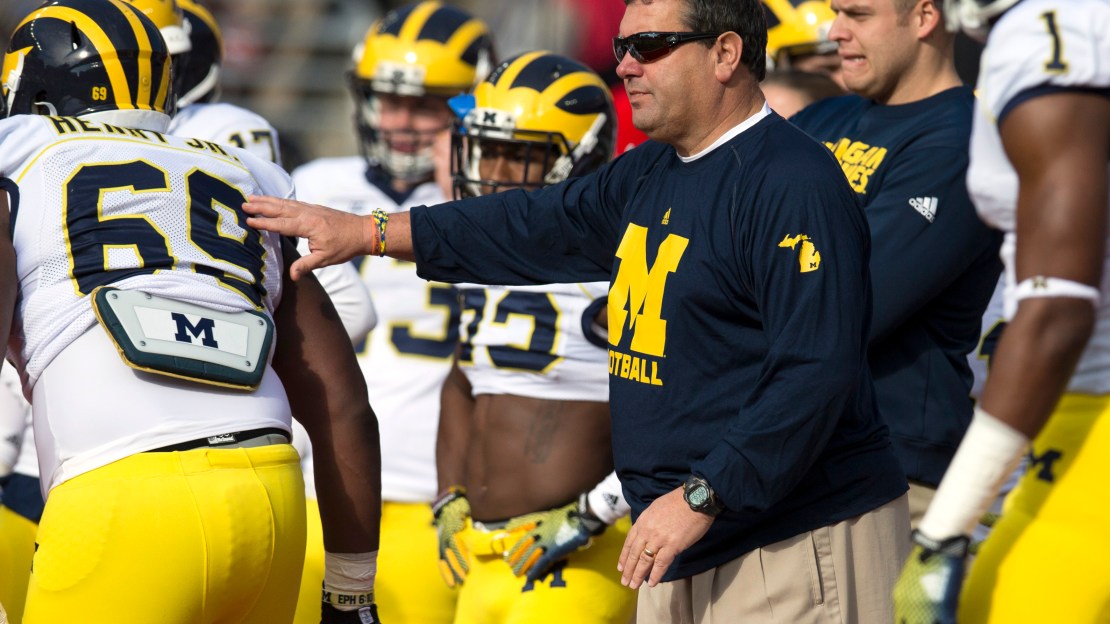 The deck looked to be stacked against Hoke when 2014 dawned. And, he didn?t deliver.

"This was not an easy decision," interim A.D. Jim Hackett said.

The Hoke era began with a bang in 2011, guiding Michigan to an 11-2 mark capped by a victory in the Sugar Bowl over Virginia Tech. Maybe he could deliver the school?s first Big Ten title since 2004 once he flipped the roster and he had ?his? players in the fold.

Unfortunately, that 2011 season was the high-water mark for Hoke. It was downhill from there. Hoke?s win totals went from 11 to eight to seven to five.

"I feel very fortunate to have been an assistant and head coach at the University of Michigan," Hoke said in a team release. "I will always support the University and this football program. This is a special place and one that Laura, Kelly and I have enjoyed representing during our time in Ann Arbor."

Pressure waited on the doorstep of this season. Hoke needed to deliver some results coming off an ugly 7-6 season in 2013 that saw a 5-0 start melt into a 2-6 finish. The loss to Kansas State in the Buffalo Wild Wings Bowl epitomized the team?s ineptitude.

Hoke was supposed to be the anti-Rich Rodriguez, the coach he replaced who never was embraced. Rodriguez was viewed by many as an outsider. And, he was, arriving from West Virginia with no connection to the school, Big Ten or Midwest. Even worse, Rodriguez brought with him a cultural change, installing a spread-option offense that was a stark contrast to the traditional pro-style attack that had come to define Wolverines football for generations.

Alas, RichRod was chased out of Ann Arbor after just three seasons with a 15-22 overall record and a 6-18 Big Ten mark. Michigan football hadn?t been this low in generations.

Enter Hoke, who was hired by Brandon after winning at places (San Diego State and Ball State) where it?s tough to win.

Hoke was a ?Michigan Man.? No, he wasn?t a graduate of the school. But he had been an assistant there from 1995-2002, helping the program win the 1997 national championship. He was one of Lloyd Carr?s guys. Hoke presumably knew what it took to win at Michigan. He knew the history. He knew the style. He knew the pride. He knew the Michigan way. Most of all: Hoke valued Michigan and all its brand stood for. Cut him, he bleeds blue.

But the program never improved, with a lethargic offense being the crux of the team?s on-field issues. The offensive line play flopped. That, in turn, disrupted any hopes of an array of skill-position talent taking flight. What?s ironic: Hoke won big with Rodriguez?s players-but he couldn?t with his own.

Other issues for Hoke included an inability to develop talent, spotty game management and a seeming inability to adjust on the fly. But, again, worst of all was an offense that never got on track. The quarterback position was a sore spot, as Hoke never started a player he recruited for the position.

That was a big reason why Hoke struggled vs. Michigan?s biggest rivals, going 1-3 vs. Ohio State, 1-3 vs. Michigan State and 2-2 vs. Notre Dame.

The losing was bad enough. But couple the losses with the admitted mishandling of quarterback Shane Morris? concussion vs. Minnesota on Sept. 27, and it was too much.

The health of players has become a hot-topic in recent years with a heightened awareness of concussions. Protocols and policies have been reviewed and revised nationwide at every level. And the message has become very clear: error on the side of caution when it comes to head injuries.

Michigan failed in that regard with its handling of Morris, who sustained what later was diagnosed a ?probable concussion.? Morris, after wobbling and needing assistance to maintain balance, went back in following a series of missteps and awful sideline communication.

What followed was a classic example of how not to handle a crisis situation, as Michigan looked uniformed and not united in addressing the situation in the days the followed to make it look like a dysfunctional athletic department that doesn?t communicate. With pressure mounting on Brandon, he resigned on Oct. 31.

Now, for the third time since 2008, Michigan-which hasn?t won the Big Ten since 2004–is looking for a head coach. Meanwhile, Ohio State and Michigan State continue to get better under Urban Meyer and Mark Dantonio, respectively, while Penn State is gaining steam under James Franklin.

But first before hiring a coach, Michigan needs to hire an athletic director, as Hackett is serving in an interim capacity. But reports indicate he may stay on for an extended stretch.

The Michigan A.D. can?t miss on this hire. There?s too much at stake.