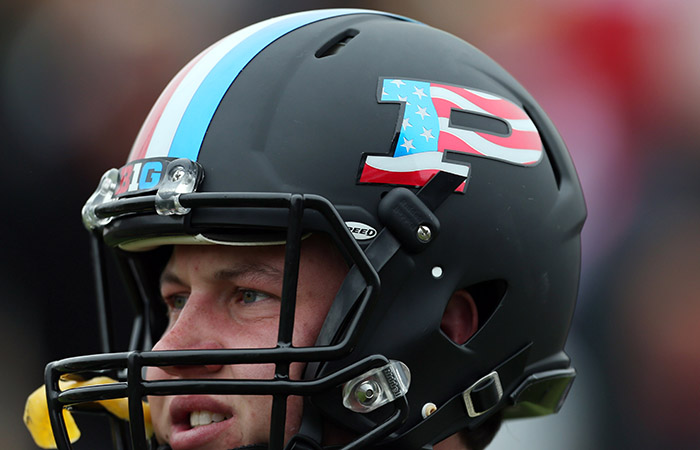 With the regular season complete, it's time to take a look back at the new designs Big Ten football teams debuted during the 2014 season.

Also, on the uniform front, the Big Ten's Scott Chipman confirmed Ohio State is the home team in the Big Ten title game Saturday in Indy. For what it's worth, @BadgerFootball tweeted this photo. Chipman also said the West will be the home team in 2015, and it will rotate every year.

Back to the 2014 regular-season designs. As one might expect in this day and age, there were a lot of them.

Check them out below.

The Illini and Nike introduced a new set of uniforms this year (see them here), and there was no shortage of combinations. The most common combo? That was this. There was a really cool new alternate helmet, too. The biggest fashion statement was the "Ghost" alternate.

The Hoosiers have a deep collection of helmets – yes, that still includes the chrome candy stripe alternate – but they didn't unveil any new alternate uniform designs. They did wear a new alternate helmet vs. rival Purdue (see it below) and wore special treDCAL logo thigh pads in one game.

The Hawkeyes have a classic look, and they didn't deviate much from their usual get-up in 2014. There was the cool alternate helmet that featured a camo Tigerhawk to honor the military. The Tigerhawk logo was only on the right side of the helmet.

Our helmet today features this camo Tigerhawk logo in recognition of those who serve or have served in our military. pic.twitter.com/uRsQJyjsRJ

The Big Ten's "Oregon," the Terps broke out plenty of alternate designs, including back-to-back new "Ops" alternates. First, it was this one vs. Michigan State, and then this one at Michigan. But, when it comes to Maryland uniforms in 2014, nothing tops the "Star Spangled" alternate.

The Wolverines, the owners of one of the Big Ten's most iconic designs, only introduced one new look in 2014, and it was a bold one. That would be this all-blue alternate, which was worn to celebrate the program's Under the Lights III game vs. Penn State.

Time to warm up. https://t.co/k3QDRkdB3u

The Spartans got rid of the green shoulder stripes on their road uniform in 2014, and it was a nice move. Not much else to report, though, other than the team going all-green for its big home games (Nebraska, Michigan, Ohio State). Oh, and there were the treDCAL logo thigh pads for one game. No, the chrome helmet did not make an appearance.

The Spartans are ready to take on the Nittany Lions at 3:30 p.m. in Beaver Stadium. Watch on ABC/ESPN2. #MSUPSU pic.twitter.com/4GuIWca3a1

The Gophers introduced a new gold alternate helmet, and they wore an "Epilepsy Awareness" decal on the back of the lids vs. Ohio State and at Wisconsin. Minnesota donned the helmet three times, giving them a trio of new combinations (gold-maroon-gold, gold-white-gold & gold-gold-white). They also went with a patriotic look vs. Iowa, which you can see below.

Eyes on the Pig. pic.twitter.com/MaPUcuocKk

The Huskers own one of the Big Ten's classic looks, but that didn't keep them from busting out another adidas alternate, this one an all-red design, vs. Illinois. The Huskers also went with the all-white look, for the first time since 2007, at Fresno State, Northwestern and Wisconsin.

The Wildcats experimented with several new combinations, including purple-purple-white, purple-white-purple and white-white-purple, and also wore a patriotic helmet. Its biggest statement was the Under Armour "Gothic" Homecoming alternate vs. Nebraska.

When you have the most spectacular campus in the country, you might as well pay homage to it with a uniform. #B1GCats pic.twitter.com/T9dJp1YRru

The Buckeyes didn't unveil any new designs in 2014, but they did wear their Nike home (vs. Virginia Tech & vs. Illinois) and away (at Penn State) alternates.

When the lights come on, the special unis come out! #Buckeyes wearing alternate @usnikefootball gear vs ILL. #GoBucks pic.twitter.com/Q1yzdRMTqm

The Nittany Lions kept the nameplates in James Franklin's first season, after all. That said, vs. Northwestern, they went the tradition route. They also wore TreDCAL logo thigh pads for a game.

The Boilermakers went with neon green accents vs. Michigan State to raise cancer awareness. They also wore this patriotic helmet on Military Appreciation Day and this student collage "selfie" lid. Purdue also debuted this combo. Here's a great look at all of Purdue's 2014 helmets.

The Scarlet Knights didn't break out any new designs in 2014, going with their usual set of monochromatic looks (red or black at home and white on the road). They paired those sets with either a black, white or silver lid. At Navy, Rutgers went with this patriotic helmet.

That was a 60-minute CHOP for @RFootball – great win at Navy. #ChopNavy pic.twitter.com/A9FDqseVlg

The Badgers made a slight change to their jersey in 2014, removing the numbers on the shoulders (before & after) and moving the stripes from the bottom of the sleeve to higher up the sleeve. They also broke out a new white facemask.

Today's look for the #Badgers. A little something different for the big game. pic.twitter.com/7YtNPzrqE9